If you didn't get your fill last month with Psikyo Shooting Stars Alpha, NIS America is back to give you the second half of the equation. Starring two of Psikyo's most famous series, Samurai Aces and Gunbird, Psikyo Shooting Stars Bravo features the same presentation, features, and template as the Alpha anthology. That means plenty of co-op opportunities, TATE mode for arcade purists, and a disappointing lack of special features. The key difference between the two? The Bravo collection has a slighter inferior line-up.

Where the Alpha installment boasted four unique properties, Bravo can claim only two—although they're spread across different perspectives, mechanics, and genres. The games include Samurai Aces Episode I, Samurai Aces Episode II: Tengai, Samurai Aces Episode III: Sengoku Cannon, Gunbird, Gunbird 2, and Gunbarich. Each titles comes with a host of options, including up to seven difficulty settings, unlimited continues, mappable buttons, screen filters and borders, and TATE mode for the vertically-scrolling entries. 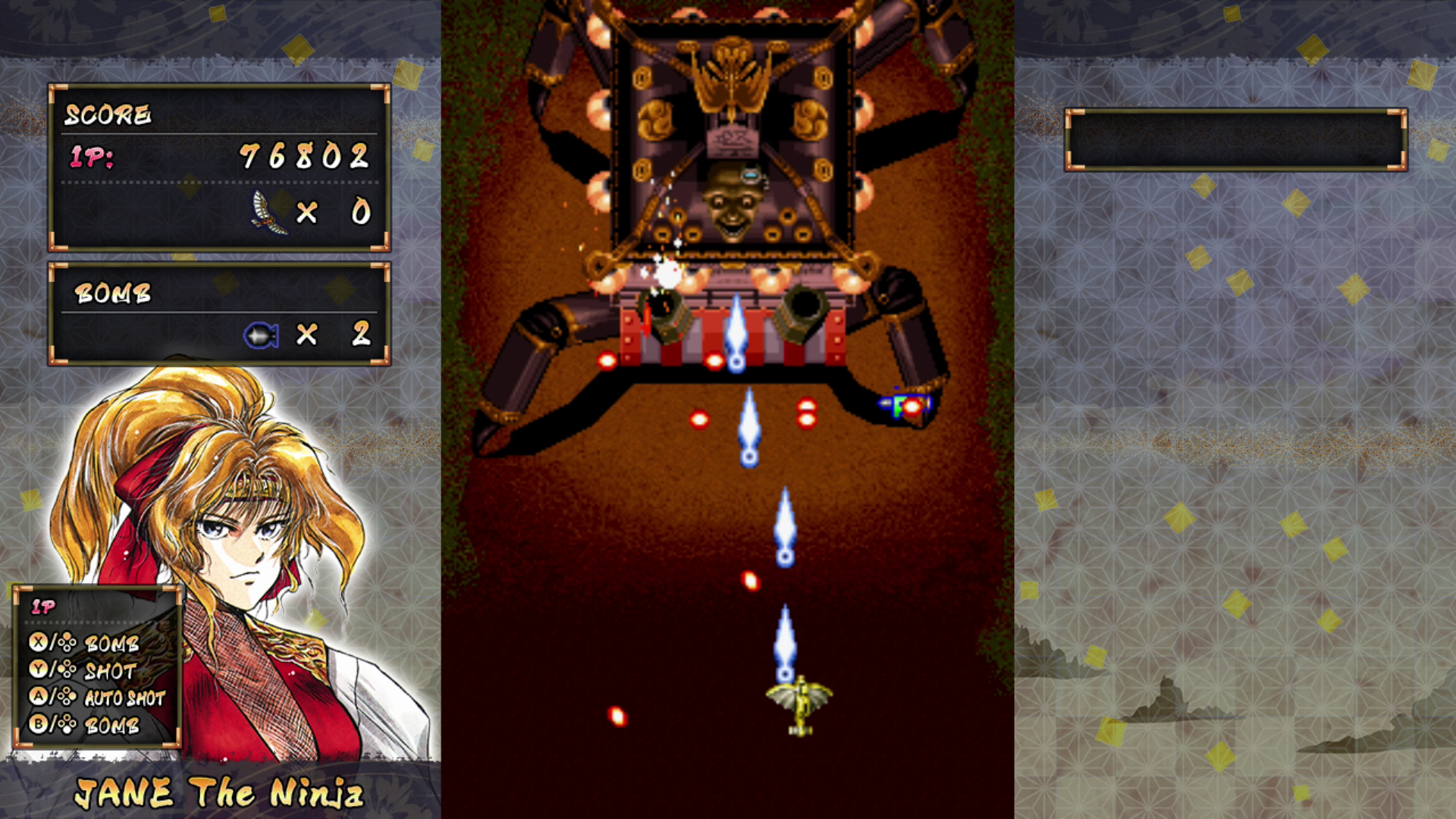 The first game in the collection, 1993's Samurai Aces (known in Japan as Sengoku Ace), is also the very first Psikyo title. It's a solid vertical shoot-em-up that set the formula for many company shooters to follow, including Strikers 1945 and Gunbird. Sporting several playable characters with unique charge and bomb attacks, a straightforward scoring system, and a mishmash of genres—ships include a bird, a fighter jet, and what looks suspiciously like an X-wing—it's the prototypical Psikyo game.

Its sequel, Tengai (Sengoku Blade in Japan), is one of the highlights of Psikyo Shooting Stars Bravo. It ditched TATE mode for a horizontally-scrolling experience and replaced ships and charge attacks with flying humanoids and familiars/pets who deploy special attacks (seeing Junis' pet Lemur Socrates breathe fire on an enemy never gets old). While the mechanics are similar to other Psikyo shooters, the parallax scrolling backgrounds and stage transitions are spectacular, and the transforming bosses a sight to see. 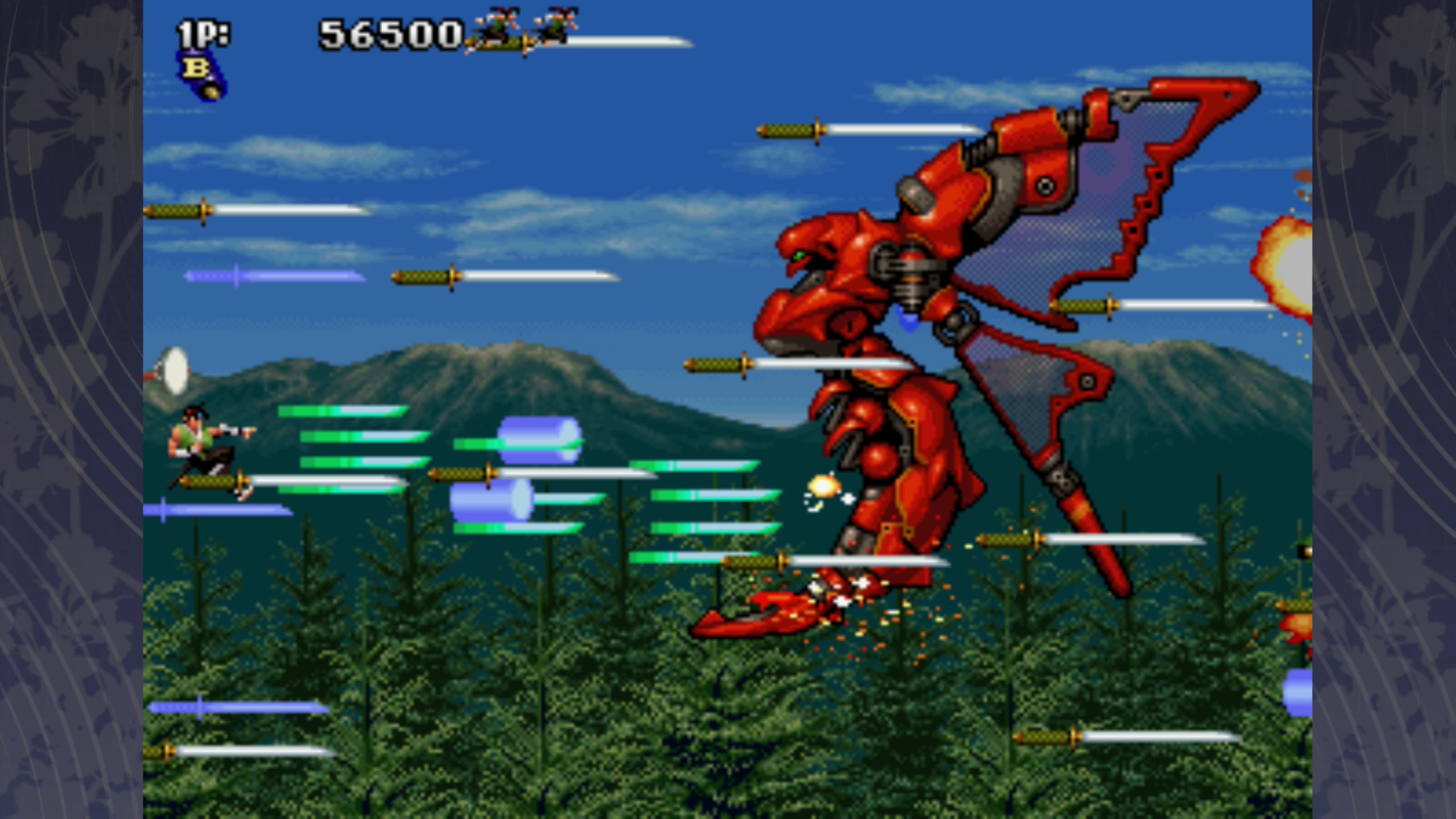 It seems like every game anthology needs a dud. For Alpha it was Sol Divide. For Bravo, it's certainly Sengoku Cannon, the third installment in the Samurai Aces series. Released in 2005 on PSP by X-nauts, a development team staffed by Psikyo vets, Sengoku Cannon has some good ideas buried under unattractive visuals and clumsy execution. The scoring system, with its cannon multiplier, is actually a leap over previous Samurai Aces titles, but inferior sprite work, ugly and blurry 3D backgrounds, loose controls, and a short running time hold it back.

The remaining three games fall under the Gunbird banner. The first is Gunbird, a 1994 shooter that plays closely to Samurai Aces, albeit with a silly sense of humor and cartoon visuals. You'll probably stop playing it, however, after you boot up Gunbird 2, the best shooter in the collection and the second-best Psikyo title, after Dragon Blaze. With refined visuals, new characters, and much more elaborate scoring and fighting systems—you can now perform melee attacks and multiply your score by medal chaining and deploying bombs while bullets are grazing your character—it's a legitimately great shoot-em-up. 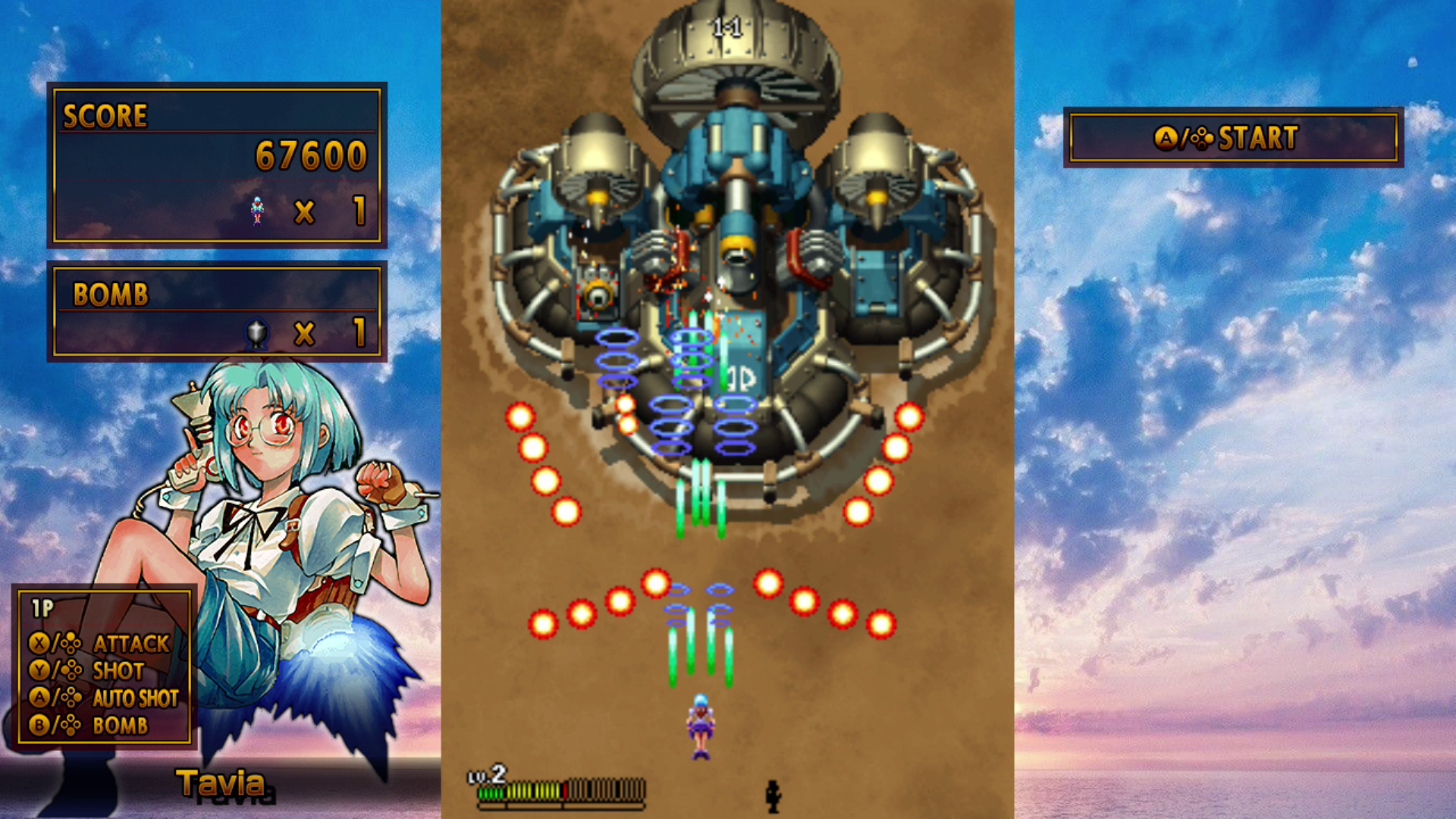 The final game in Psikyo Shooting Stars Bravo also belongs to the Gunbird franchise, but it's not what you'd expect. More Arkanoid than anything, Gunbarich is a paddle/pinball game that stars teenage witch Marion of Gunbird fame. It's a cute, decent game, but it can often feel too random, busy, and difficult. With only two playable characters and no co-op options, it also lacks the staying power of other arcade titles in the anthology.

The special features in the Bravo compilation mirror those in its Alpha counterpart. Although developer Zerodiv provides excellent emulation and support for TATE, it doesn't bother with extras like developer interviews, inside information about Psikyo, or a virtual museum. It also lacks online leaderboards, which again is a total head-scratcher. 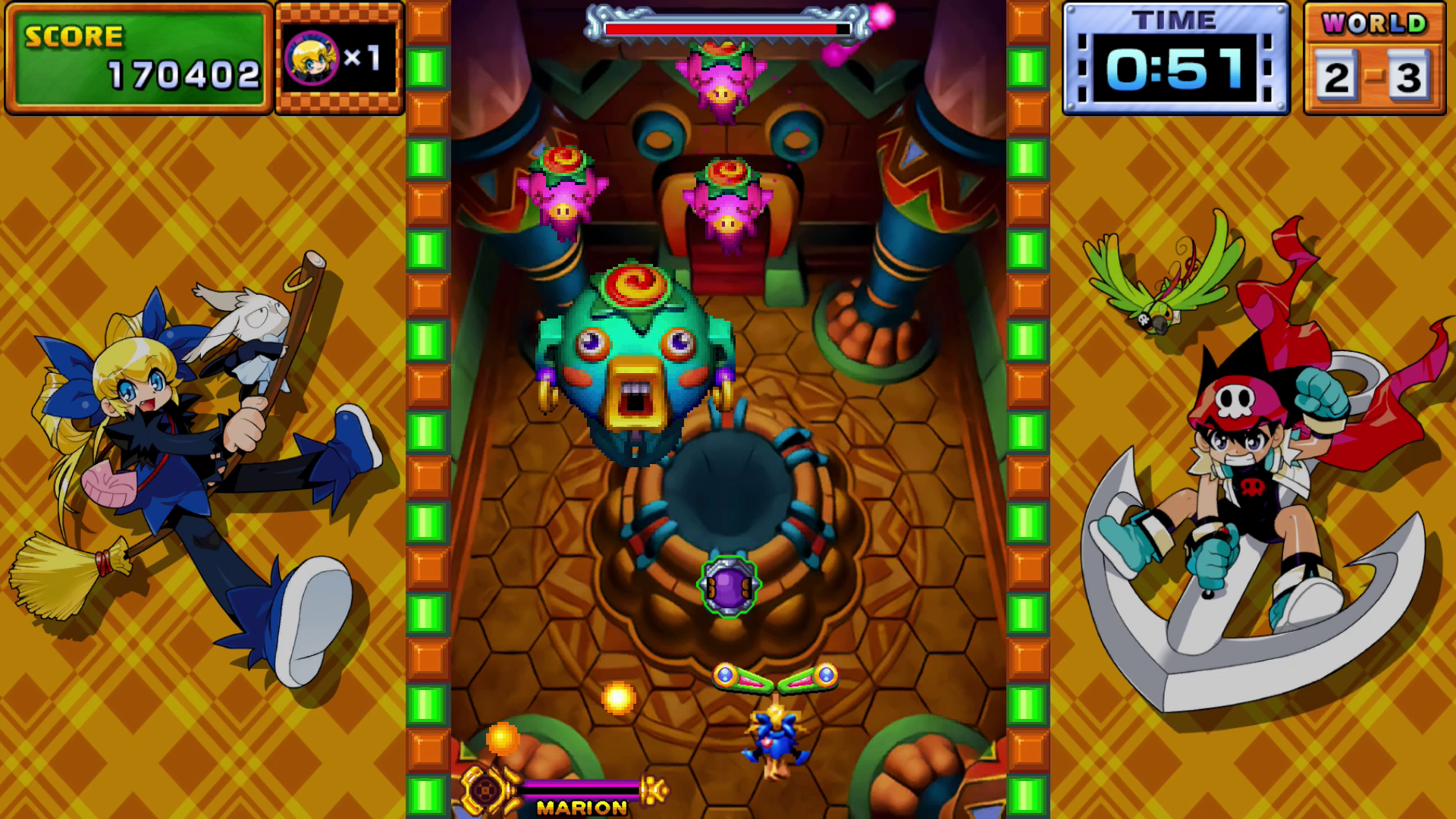 While Psikyo Shooting Stars Bravo might be slightly inferior to the Alpha collection, it's still an adequate assortment of shooters from one of the best in the business. Sengoku Cannon is mediocre at best, but the remaining five arcade titles range from decent to great. Shoot-em-up pros and arcade game collectors will find the most value here, whereas casual shooter fans may wish to pick up the better games piecemeal.

This review is based on a digital copy of Psikyo Shooting Stars Bravo for the NS, provided by the publisher. 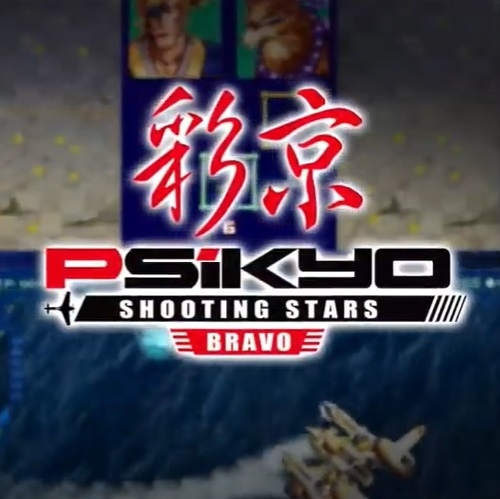