Rufus is the most unlikeable video game protagonist that I have ever found awesome.  He’s a lazy screw-up who gets along by mooching off his ex-girlfriend, he refuses to get a job or do anything meaningful with his time, and he’s crass and rude even in the most inappropriate of circumstances.  Ordinarily, a character like this would disgust me.

But he’s so dang funny!  Where else are you going to find a guy who tricks his ex-girlfriend into teaching a trained parrot derogatory phrases about himself, then uses said parrot to prank call the police so he can sneak into the station and take needed supplies?

Rufus’ objective in Deponia is to find a way off the titular planet, which is essentially a gigantic junkyard.  He wants to escape his proletarian lifestyle by going to Elysium, the bourgeois neighbouring planet, so that people will finally recognize him for the wonderful gift to humanity he is.  To this end, he is constantly designing new contraptions to assist himself.  A scenario at the start of the game seamlessly blends the story with the point-and-click gameplay, with the player collecting tools to build a pulley system that will latch onto a passing ship and carry him aboard.

That plan fails miserably, and he soon gets a new goal: saving a girl named, well… Goal.  Goal is an Elysian woman who falls from the sky and gets knocked unconscious.  If Rufus can revive her, he thinks, not only will he get to Elysium, but he’ll win the hand of a beautiful girl as well.  Unfortunately, a conniving group of Elysian villains called the Arganon not only want her back, but plan to blow up Deponia once they get her.  Even though everyone in town hates him, Rufus is thrust into the limelight to save the world and (hopefully) get the girl.  The story is well-told and full of jokes and visual gags, and every single character is memorable.  As the story builds to a climax, there is tension and you really feel like lives hang on every word Rufus says near the end.

Too bad there’s no payoff.

At first glance, the ending seems to make sense — until you think about it.  Yes, there is a (rather bittersweet) resolution to the Rufus-saving-Goal storyline and you do find out what happens to Deponia in the end.  However, almost everything else is left completely unresolved.   Rufus’ father was the mayor of his village of Kuvaq, and he randomly up and left, leaving his son with just a mysterious box to remember him by.  Interesting plot thread, no?  Too bad you never find out where he went or why he left.  And that’s not the only loose end.  Why is there a villain who looks exactly like Rufus?  It could be related to that first topic, but again, we never find out.  Heck, even the antagonists are just a vaguely defined ‘evil bureaucracy’ whose background is barely explained, and we never learn why they want to destroy Deponia.

Essentially, the story has excellent setup with disappointing results.

Gameplay is just as important as story in a game like this, though, and the puzzles on offer here are uniformly challenging and smart.  There were only a few occasions where I had to resort to the tired convention of trying to use every item I had on every other possible item.  In general, I had a blast learning how to anger an electronic bull so I could drain some of his blood to put in a coffee, or distorting the planet’s center of gravity to alter a delivery-pigeon’s flight path.  The only real issue I can take with the puzzles is that the last couple are too easy.  The two tensest scenarios in the game can be solved with one or two clicks, while previous ones could take over an hour.

The game is an auditory delight.  Be it Rufus’ constant witty remarks or the theme song sung by the ‘Huzzah’ man in between chapters, there's no shortage of treats for the ears in Deponia.  The graphical style is Scott Pilgrim manga meets Monkey Island.  Characters are drawn in a tall and gangly way, yet everyone is oozing with charisma and hilarious self-importance.  To top it off, load times are mercifully brief even on the modest hardware I was playing on.

At the end of the day, Deponia is a game for those who favour traditional comedic point-and-click adventures over the more heady fare offered up by the likes of The Dark Eye or TellTale’s Walking Dead games.  At about ten hours long, there are plenty of laughs to be had and brainbusting puzzles to be solved.  The story is well-written and entertaining, with Rufus’ constant failures enough to make you simultaneously laugh at him and want to see him succeed.  It’s truly unfortunate that so much goes unresolved, because Daedalic Entertainment has introduced a fascinating world filled with comedic characters that you want to see get what they deserve.  Overall, it is worth playing through just to see what hijinx Rufus will get into next.

This review is based on a Steam copy of Deponia, provided by the publisher. 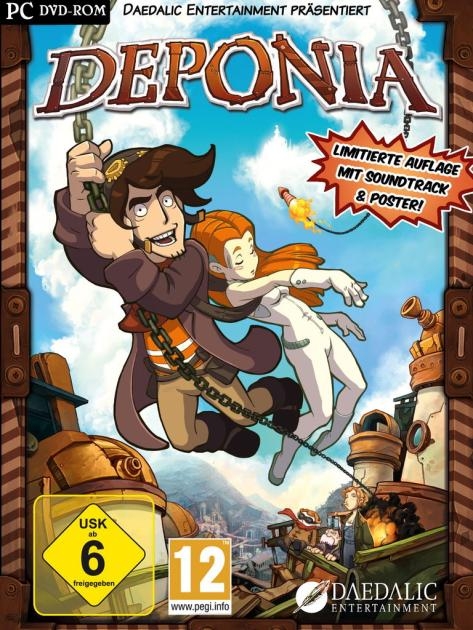