For all of its duds, I oftentimes miss gaming's mascot platformer era.  You just needed fresh visual design, solid mechanics, and a consistent tone to capture an audience's imagination.  What better time to try reviving that era than when games can be – ostensibly – crafted by one person?  Enter Nicolas Meyssonnier, a young designer with a strong avidity for that beloved epoch (MediEvil, Jak & Daxter, and more).  Now with the game getting spruced-up 9th-gen versions around last Halloween, there's only one question to ask: is Pumpkin Jack a trick or a treat to play?

Not one for peaceful times and innocently frolicking bunnies, The Devil casts a dreadful spell upon Arc En Ciel Kingdom: The Curse of Eternal Night.  The dead have risen again and wreak havoc across the land.  Not too keen on this plan, the humans entrust their chances to a powerful wizard who can potentially stop Satan’s schemes.  To put a stop to this Jack, The Pumpkin Lord, is entrusted with destroying this newfound hope and ensuring evil reigns. 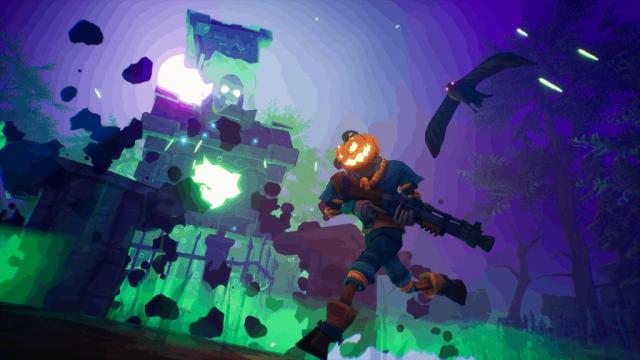 It's a pretty simple inversion that's fitting for a Halloween-themed title.  The essence of Jack, the greatest rogue who reportedly tricked The Devil thrice, imbued as a type of surly squash is such a great angle to take.  His helpful avian companions, the pompous Owl and pop-culture-referencing Crow, play supporting roles for both levity and steering you towards the next objective.  Despite the hit-or-miss comedy being a 20/80 split, they're still beneficial in characterizing Jack's brusque mannerisms.

Inconsistent character interactions aside, Pumpkin Jack also relies on odd storytelling choices.  Each level bookends with a summation of past events akin to a fairy tale.  Aside from the beginning scene, there's no reason to have a semi-stilted voice actor recount the important beats Jack has just accomplished.  You'd think this animated storybook structure would be used to set up the next obstacle instead; make the audience look ahead, not behind.

All in all, it's a fun little subversion of the Good vs. Evil story, weighed down by a couple of misguided creative decisions.  Some of the minor characters are fun, but the ones you're with the most typically blurt out boring dialogue.  And the unnecessary need to recount what the player did could've gone towards stronger world-building and characterization. 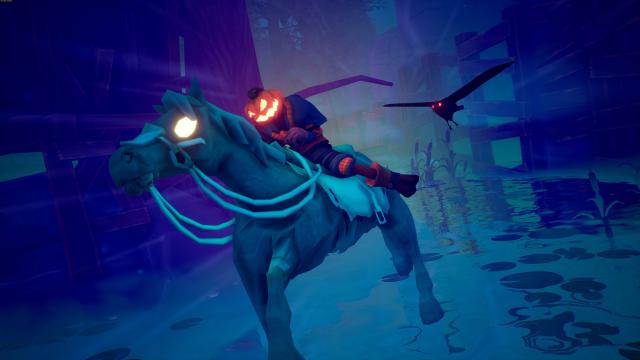 These expositional missteps don't carry over to the visual design, fortunately.  The instant I saw Jack's striking look I thought of his potential as a mini-boss in Banjo-Kazooie's Mad Monster Mansion.  There's something so simple and succinct about him; take the skeleton and clothing of a scarecrow, replace the head with a scary jack-o-lantern, imbue it with the malign influence of The Prince of Darkness, and voila!  You have what could've been one of Nickelodeon's cooler protagonists for a Halloween-centric show.

Stepping away from the main character, the kingdom is certainly much livelier thanks to The Devil's handiwork.  The varied color palette across each level fits the appropriate thematic intention and it feels genuinely fun to explore.  Aside from the final area, a lot of the expected settings are checked off: haunted forest, mines, swamp, and so on.  It's similar to a lot of 3D platformers of earlier eras: capture a specific visual template, incorporate some platforming/combat challenges unique to that identity, and move on to the next place.  Along with a smidgen of Tim Burton, Pumpkin Jack's aesthetic perfectly transplants the mood and texture of early 3D platformers.

Similar in mixing the playful and spooky, Pumpkin Jack's soundscapes also harken back to early 3D platformer eras.  There's no other voice acting outside the underwhelming narrator; instead, each character grunts before their text blurb.  Sound design does an adequate job of aurally reinforcing Jack's different moves, but rare audio bugs and some sound foley not having the proper oomph! keeps it from reaching greater heights.  Yohan Jager's soundtrack on the other hand is among the game's biggest highlights.  The orchestral-focused score wanders off into being "generalized spookiness" in some stages, losing personality in the process, but the operatic excesses of each boss fight help make them so memorable.  This young talent deserves a plethora of new projects on the horizon. 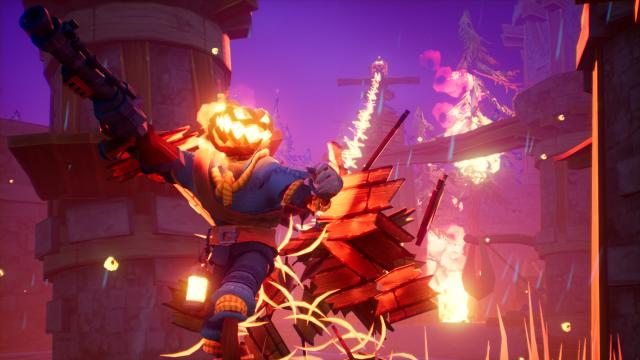 Capturing the kind of duo-buddy system found in Ratchet, Banjo, and Jak, the core gameplay routines operate on well-worn fundamentals.  Jack, armed with either a melee weapon or gun, has the usual jump, dodge, and attack options for trimming down undead ghouls.  His crow companion can be utilized (LB button) as a quick aerial stun that's on a cooldown.  It often devolves into a basic hack-n-slash platformer: go in close for a couple of hits then roll away when enemies want to counter.  There's a teeny bit more pumpkin spice added when facing a motley collection of ranged and melee combatants at once, or handling an environmental gimmick; otherwise, you know what you're getting into relatively quickly.

Feeling familiar isn't necessarily a bad thing if it works well, but that's not really the case here.  Combat is just reliant on simplistic button mashes outside of its pleasantly engaging boss fights.  This is partially thanks to how unchallenging it feels to tackle minions.  Not only are full health restores found at copious cauldrons (which serve as checkpoints), all of the breakable objects littered throughout practically guarantee your gauge is at 100% after each fight.  Only boss battles limit their availability and they feel tenser because of it.  Outside of the modest arsenal of various weapons to use, with some neat animations to boot, the combat systems are unimpressive.

Although not bereft of problems, at least the mechanical variety compliments that core loop.  Wrestling with the floaty platforming infrequently resulted in my death, but the occasional fun challenge eased that annoyance.  Some of its best moments come from taut on-rails segments, like cruising on a mine cart or escaping a burning barn.  Some puzzle-platforming segments require only Jack's head to proceed; just walk up to that specific tube and he'll spin his head off like a basketball.  Although it's a nice visual gag of seeing an angry gourd with octopus tentacles for legs, the challenges vary from hit (leading a bomb to its destination) to miss (glorified Whack-A-Mole).

Even looking beyond its shortcomings, what's missing is that "it factor" found in so many of Pumpkin Jack's inspirations.  Meyssonnier has fashioned a good skeleton based on well-worn staples, but the flesh is still a bit putrefied.  Whether it's minor things like removing the forced walking on beams or retooling the combat dynamics, you can intuitively see a better version of this game while playing. 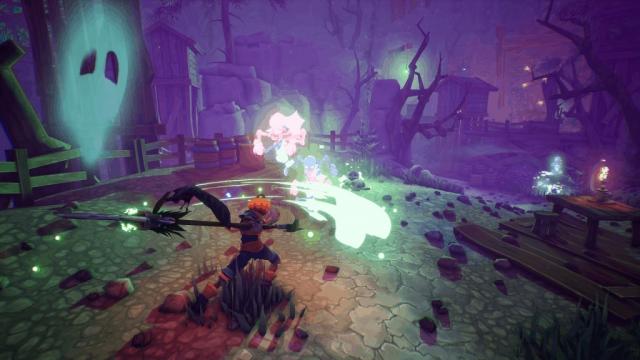 The value proposition hits that middle ground of neither boosting nor detracting from the experience.  The "completionist-lite" style I typically play took me over 5 hours before reaching the credits.  That's on the lower end of completion times with respect to $30 titles, for sure.  The vast majority of gramophones and crow skulls are easy to find, but I'm tempted to go back and reach 100% for achievements and to use those skulls to purchase all of Jack’s fun outfits.  These aren't impressive arguments for its replay value, but I think it adds just enough to make it feel like a complete odyssey with some fun diversions.

Regardless of where I land on it overall, Pumpkin Jack is another great example of the prodigious work one developer can accomplish with modern tools.  I think that's a wonderful testament.  When looking at the game proper, I think Nicolas Meyssonnier's work falls just short of its action-platformer goals.  But when you consider its great Halloween-themed visual design, engaging soundtrack, strong personality, creative potential, and its place in today's market, genre fans can still have a gourd time with it.

This review is based on a digital copy of Pumpkin Jack for the XS, provided by the publisher.