Publisher Bandai Namco has high expectations for FromSoftware's Elden Ring to be a huge success. The company in a recent Q&A with investors translated by Wccftech is expecting the game to sell four million units by the end of the second quarter of the fiscal year ending March 31, 2022.

This would mean four million units sold in about five weeks. This would be faster than FromSoftware's last release, Sekiro: Shadows Die Twice, which ended up selling 3.8 million units in about three months.

"As a future major title, Elden Ring is scheduled to be released in February 2022," said the publisher. "It has been highly evaluated by the game industry and game fans, having won numerous awards at game events in Europe even before its release, and is expected to sell 4 million units (worldwide including Japan) during this term." 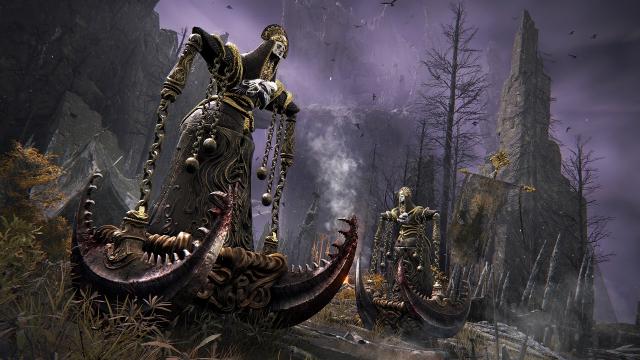 Dark Souls 3 sold about 3 million copies in that time. 4 million isn't impossible but it's a high goal.

True, but the genre has grown significantly since then, and the industry as well. Considering the hype this game is getting, it would be shocking if it manages to review well and doesn't reach those numbers.

Elden Ring has the advantage that you can rush right in and play it as a crazy hard game. Or you can explore the game more, do more side-quests, level up your character (and your own skills), and it will be a far more forgiving experience than a typical Souls game. This gives it an edge, IMO. I had no interest in playing Dark Souls 3, but I do have an interest in playing this.

wow fcken counting ur chicks befo they hatch is not going to be a good luck charm haha!

I own a bicycle shop, and I have to speculate about how many bikes I'll buy, a long time in advance of getting the bikes. My suppliers have to decide how many they're going to manufacture even further in advance.

So yes, that's pretty much all of business. Projecting in advance.

Are you aware that this is a less linear game that let's you explore the world and level up via side quests before tackling the hard parts of the game, meaning you can rush headlong into it like a traditional Souls game, or that you can make it somewhat easier it you choose to fully explore it? Seems like you're assuming it's going to be just as hard as Dark Souls 3 for all players. If so, I think that you're mistaken.

Your bicycle shop is nowhere near the same as a medium that increasingly relies on digital media and costs mere pennies to produce a single copy. I get the idea behind the logic but they are totally different in terms of profit margins, risks, etc.

Pennies to produce a single disc, but not pennies to box it, come up with manuals and other packaging, ship it around the world, have a system in place to credit retailers for future price drops, etc. And your reply got lost in the weeds of one example, when I provided multiple examples.

Nowhere near that. They don't get $60 for the game, that's the retailer.