Rockstar Games has posted a note apologizing for the technical issues with Grand Theft Auto: The Trilogy – The Definitive Edition. The developer has announced plans to address the issues with the remasters.

The first Title Update will be released in the coming days for all versions of the remasters that will address multiple issues. 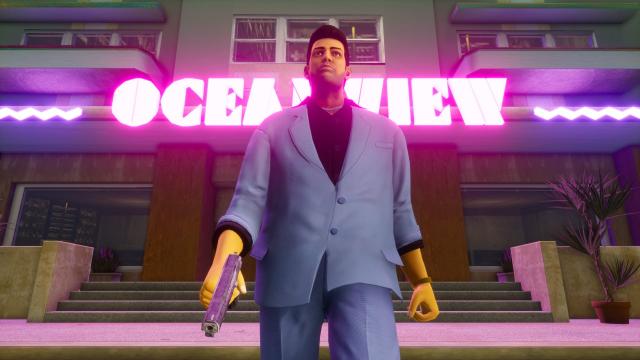 Read the note from Rockstar below:

We want to provide an update regarding the unexpected technical issues that came to light as part of the launch of Grand Theft Auto: The Trilogy – The Definitive Edition.

Firstly, we want to sincerely apologize to everyone who has encountered issues playing these games.

The Grand Theft Auto series — and the games that make up this iconic trilogy — are as special to us as we know they are to fans around the world. The updated versions of these classic games did not launch in a state that meets our own standards of quality, or the standards our fans have come to expect.

We have ongoing plans to address the technical issues and to improve each game going forward. With each planned update, the games will reach the level of quality that they deserve to be.

A new Title Update is on the way in the coming days for all versions of Grand Theft Auto: The Trilogy – The Definitive Edition that will address a number of issues. We will update everyone as soon as it is live.

In the meantime, it pains us to mention that we are hearing reports of members of the development teams being harassed on social media. We would kindly ask our community to please maintain a respectful and civil discourse around this release as we work through these issues.

While one of the goals of the Definitive Editions was to allow players to enjoy these games on modern platforms for many years to come, we also understand that some of you would still like to have the previous classic versions available for purchase.

Once again, we'd like to thank everyone for their patience and understanding while we work through these updates to ensure these games meet everyone's justifiably high standards.

"The updated versions of these classic games did not launch in a state that meets our own standards of quality, but we released it anyway."

True. But haven't gamers voted that they don't care about this sort of thing for years now? When developers found out that we will test their games for them, and PAY for the privilege to do so... you knew this stuff was going to get out of hand. And here we are.

a quick buck for the shareholders gone bad.

Apologies are easy, actually making it right from the get go is hard. Now they just have to wait for this to be forgotten by the time the next big failure comes out, and they'll be scot free.

This is arguably worse than Halo:MCC. Even at its worst, it was still a better way to play campaigns.

I don't understand why Rockstar felt they needed to release a trilogy pack of remasters. These are huge games, spend time with each release to make sure it's polished.

People actually paid $60 for this. LOOOOL

I stopped reading at the 1st sentence word: "unexpected".

nah, you knew what you guys were doing when you kicked it out the door.

And here i thought Cyberpunk 2077’s huge backlash was going to be the needed lesson for everyone in the industry to make sure not to go on that same path SMH.

Not one person from upper management has played gta

the PC versions must of been in unplayable state and use rockstar launcher issues as an excuse not to release them... i can't stand the rain in it myself can't see where your going when it does it at night

I love it when big shots like R* are humbled. I hope they get grilled HARD for this giving them incentive to try harder and work harder.

These morons harassing developers over this is pathetic. They're are worse than "Can I talk to a manager" Karens.

It's not the developers who make the decision to launch, they merely do the work. It's the executive producers on the project that make those sorts of calls.

So the consoles won't get the classic versions then?

I might be wrong but I think PlayStation has the PS2 releases in the store. While Xbox has the San Andreas port on BC.

Either way, they could potentially fix these remasters and make something better than the OG releases. Will that happen? Unlikely. But it would be great if they did.

I just check the PS store and it doesn’t look like it. In any case, the PS4 and PS5 don’t have backwards compatibility with the PS2 or PS3 so you wouldn’t be able to play the older versions on the newer consoles.
For the Xbox, you can play them via BC as long as you already owned a copy. You can no longer buy the original version from the store.

Did a search, they got delisted. The PS3 and PS4 have a PS2 emulator, but only for games in the store. Therefore that same emulator works on PS5. Hence, there are PS2 games in the Playstation Store you can play on PS5. For example, The Warriors is in the store.

At this point, I beleive the best way to play the original releases is via PS2 emulation on PC or download the PC versions.

I still would take the remasters over the classic ps2. Ps2 version didn't age well

You will be suprised with gamers these days.

The remasters have terrible looking sections that are worse than the original, and is immersion breaking. I would not play the remasters if you paid me to.