It was revealed earlier today the UK launch sales for Call of Duty: Vanguard are down 40 percent year-on-year compared to the launch of Call of Duty: Black Ops Cold War. Physical sales are down 26 percent, while digital sales are dropped 44 percent.

Sources speaking with VideoGamesChronicle have reported Call of Duty: Vanguard had the worst launch for any Call of Duty game in the UK in 14 years.

2007's Call of Duty 4: Modern Warfare, the game that started the modern era Call of Duty games, was the only one to have sold fewer units in its opening week. 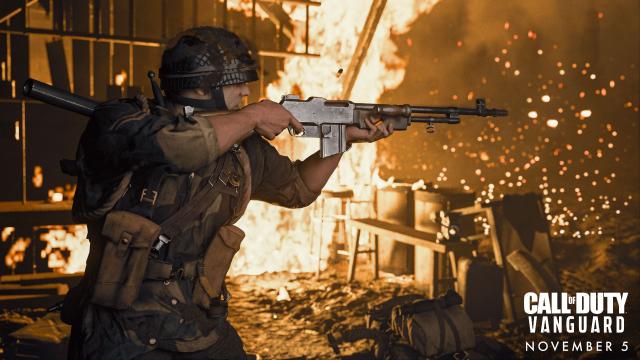 2010's Call of Duty: Black Ops is the peak launch for any entry in the series. Call of Duty: Vanguard had a launch nearly 200 percent smaller. Even Call of Duty: Ghosts had a 52 percent bigger launch.

It is possible the success of the the free-to-play battle royale game, Call of Duty: Warzone, impacted sales, as well as stronger competition this year from Battlefield 2042 and Halo Infinite.

The world is healing

Would love to see a decline in order to encourage new endevours but I think this is just most likely due to the phase in the generation with the core audience refusing to get last gen versions but the audience on the new platforms still not being big enough. I think its legs will be telling.

Yeah you're right the linked article and by extension this one doesn't make sense. "200% less" is impossible.

With that out of the way, the reason its not selling that well is price, have you guys seen the price difference? Vanguard is £63 pounds here in Britain (84.50 dollars)
Call of duty used to cost £45 (60 dollars), that's a 24.50 dollars price increase.

Other reason of the poor sales in comparison, Black ops 2010 had an amazing campaign, nowadays campaigns are just like a side dish, believe it or not, many gamers don't play online, ever, just like myself and that's why these new call of duties I buy them when they drop to 1/4 of the price

Obviously, I'm taking about the campaigns.

Yeah, the gameplay loop of Halo is very different than Call of Duty. It's not just the obvious difference of humans vs. aliens, but it's the much greater variety of challenge offered by radically different alien species/equipment, and it's the fact that your player character (not to mention some of the aliens) are shielded that adds further play-loop variety. Both are good, but I agree with you that if you've been playing the annual iterations of Call of Duty then you might be up for something different.

If you buy Call of Duty for the mutliplayer every year, then the upcoming 2042 and (especially) the AAA yet free-to-play Infinite multiplayer will be a huge draw over Vanguard. I've got the free trial of 2042 (thank you EA Play/Game Pass Ultimate) already downloaded, and have Infinite queued up for download once it goes Gold. The fact that one had a free trial, and that the other was straight-up free (multiplayer for everyone, plus also campaign if you have Game Pass). With everyone on Xbox and PC having a AAA free-to-play alternative to Vanguard, and Game Pass subscribers having two, that's a high bar for Vanguard to get past.

It has nothing to do with humans or aliens, Halo is better just because it has both amazing multiplayer and single player. Example, I never play online, ever, so for me Halo is already automatically a better investment.