It can be tough to manage the grief and uncertainty of losing a loved one, particularly for a child. As such, art can be an effective outlet in expressing one’s emotions and coping with the burdens life throws at you. Enter Sketchbook Games’ charming storybook adventure Lost Words: Beyond the Page. Written by Rhianna Pratchett of Mirror’s Edge and Tomb Raider (2013 and 2015) fame, the game follows a coming-of-age tale through a young protagonist named Izzy. Using diary entries and creative writing as her outlet, Izzy opts to craft a fantasy story to play out her emotions and deal with the prospect of losing her bedridden grandmother. Pratchett is no stranger to loss herself, and this authenticity and personal nature shines through with some memorable writing and generally heartfelt moments. 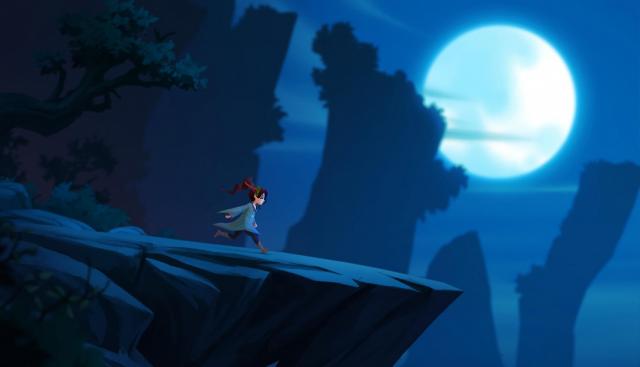 As one might imagine, narrative and emotional resonance take center stage rather than gameplay in Lost Words. Indeed, the gameplay elements err on the shallow side, being almost restrictively linear and featuring mostly basic puzzles. While not fully realized, Sketchbook does at least dabble in innovative gameplay concepts during this wholesome four-hour journey. By far, though, Lost Words’ greatest strengths lie in its earnest messages, rich atmosphere, and tear-jerking narrative. At least on this front Pratchett and Sketchbook excel in crafting a rich interactive storybook.

Fittingly, Lost Words tasks players with literally using the power of words during this virtual journal-turned-fantasy. The game oscillates between simple “diary” segments and 2D platforming more akin to a traditional game. These segmented portions are tied together by the narration of Izzy and the inventive use of text blurbs. While these cover real-life happenings and fond memories of Izzy’s grandmother, some parts are at least loosely interwoven into the fantasy world of Estoria. 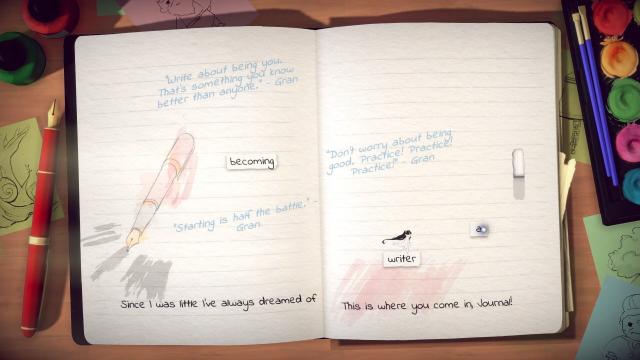 The imagined Estoria serves as the setting for some colorful 2D platforming bouts. It’s a fictionalized representation of the protagonist’s memories, grief, and inner conflicts. The “darker” side of this is personified by an ominous dragon, which has swiped the magical “fireflies” from the heroine's once-peaceful village. She’s thus called to action to retrieve these precious flies, so that she may restore safety, peace, and harmony. These themes no-doubt serve as metaphors for coming to terms with life and finding peace within oneself.

From a gameplay standpoint, both the diary and fantasy portions provide their own pros and cons. But despite the bare-bones nature of the visuals and level design, I actually found the diary bouts to be the most interesting. Each of the eight chapters begins with a view of Izzy’s journal, which is filled out in real-time with various phrases and sentences. Players will traverse the pages of the diary itself, using the lines of text as literal platforms to progress and sometimes trigger certain actions. It’s a rather surreal experience that feels both fresh and endearing. I found myself quite engaged in the virtual storybook journey — even if some of Izzy’s memories and thoughts felt mundane or inconsequential at times.

The game runs with this medium to play out its story in a truly unique manner. The words on the page often take on distinct behaviors and formations to represent what they’re communicating. These fluid arrangements act as a visual portrayal, while simultaneously adding to the platforming gameplay. Basic puzzle elements are also sprinkled in at times, by way of cobbling together phrases or interacting with an object to trigger the next sequence. For instance, you might be tasked with fixing some tea for your mother using sketched objects. Another scene may have you using a contextually fitting word to reveal a hidden visual on-screen or perform a task. An example would be dragging the word “gather” around a mess of dishes to wrangle them into the sink. 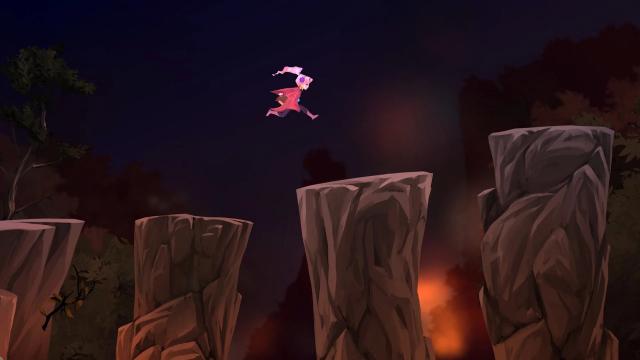 Following these brief segments are the more “gamified” sections in Estoria. This is where the storybook pages and sketches give way to more vibrant, detailed environments. Players will traverse a slew of colorful areas which include a burning village in the trees, a vast desert, and an icy tundra. In Estoria and during the diary bouts, the linear gameplay and lack of real hazards yields some pretty tepid platforming on the whole.

Like the gameplay here, the visuals in Estoria are more artistically straightforward, taking on a standard cartoon look. Still, they are laced with some nice multi-layered backdrops and rich melodies to add to the atmosphere. Lines of text will also emerge as Izzy narrates and ventures forward. It’s a neat little stylistic element which ties into the storybook theme and adds some needed aesthetic flair. Some solid voiceover work from the game’s lead — and the few other characters featured — adds to the immersion too. Unfortunately, this was stymied at times with some spotty framerates and general choppiness. 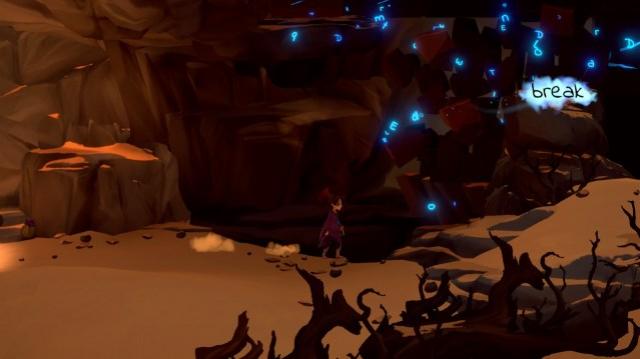 The text visuals also take on a more active role in Estoria, as a handful of words can actually be used as powers to traverse the environment. It’s an inventive feature that adds at least some minor puzzle elements, and it’s where these sidescrolling parts thrive most. You’ll earn powers such as “rise,” which can be summoned from a book to raise certain platforms, or “repair” to reassemble broken objects. It’s a neat concept which could have been fleshed out more with additional powers or more detailed puzzles. Speaking of which — the lack of touchscreen controls on the Switch version seems like a missed opportunity too, given the emphasis on moving words around via cursor.

Beyond this, any remaining “meat and potatoes” gameplay comes in the form of the fireflies themselves, which serve as the only other collectible. While somewhat hidden, most take little effort to find, and require just a slight divergence off the beaten path. They seemingly serve no purpose, though there is a neat little payoff at the game’s end if they’re all gathered.

Tinges of depth and replayability also come by way of word choice prompts, which complete or fill in a sentence within the narrative. These occasionally manifest in the game at least on a minor level. For instance, you can choose what color dress the heroine wears in Estoria, and decide on her main motive. I must say it was pretty amusing hearing her promise vengeance on the dragon while narrating, given the otherwise tame, innocent nature of the game. 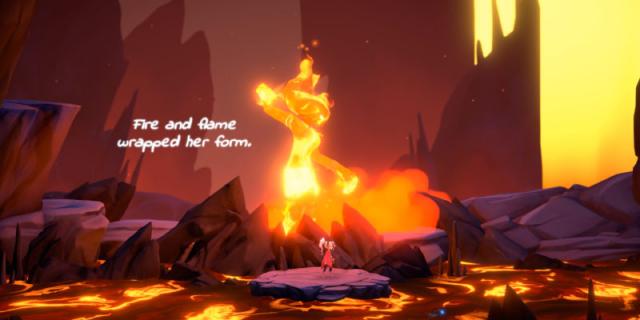 At the end of the day, Lost Words is a heartfelt adventure that’s more interactive storybook than standard game. It nonetheless flirts with some neat gameplay ideas, especially when it comes to the diary wordplay. Yet, many of these devices could have been explored further to add depth and variety.

The game very much succeeds with its emotional narrative, to be sure, and this seems to be its primary goal; it presents a creative spin on the premise of a young mind coping with grief, exploring personal growth, and finding inner peace through a colorful, interactive experience. Most of the depth that is present exists on an emotional and atmospheric level, with mere glimpses of ingenuity on the gameplay front. Those seeking an innovative storytelling tool and/or virtual catharsis will likely get something out of Lost Words.

This review is based on a digital copy of Lost Words: Beyond the Page for the NS, provided by the publisher.