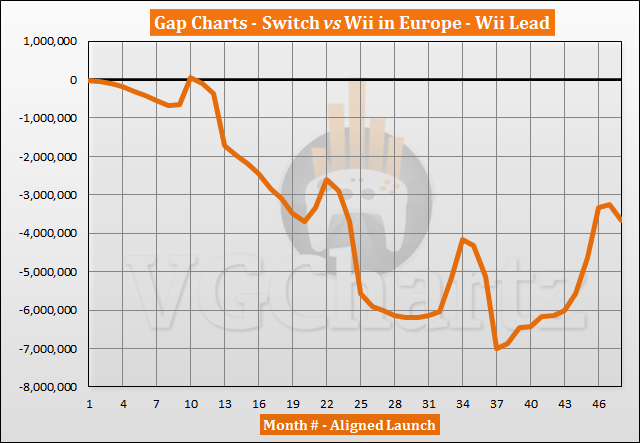 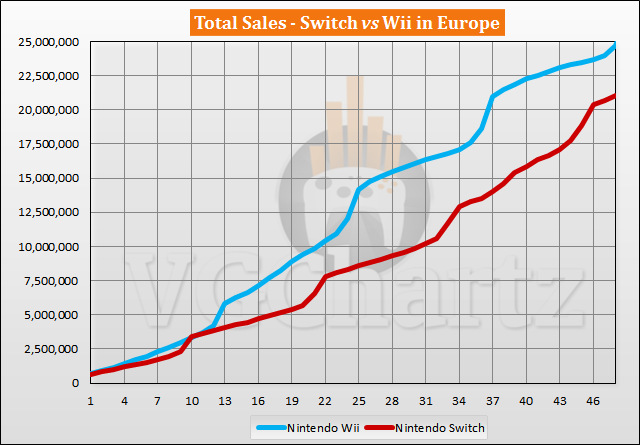 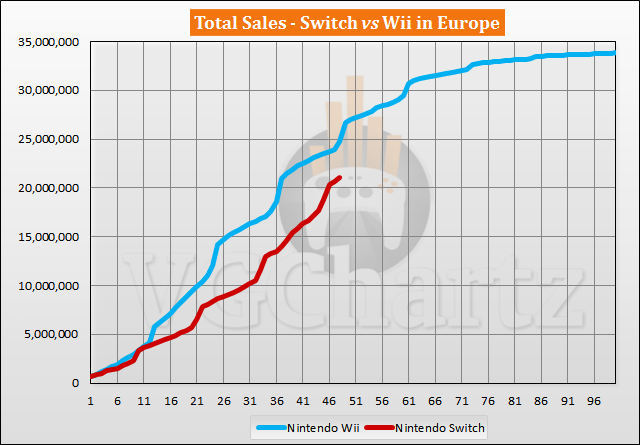 February 2021 is the 48th month that the Nintendo Switch has been available for in Europe. During the latest month, the Wii grew its lead by 405,747 units when you align the launches of it with the Switch. In the last 12 months, the Switch has outsold the Wii by just 1.47 million units. The Wii is currently ahead of the Switch by 3.66 million units.

The 48th month for the Nintendo Switch is February 2021 and for the Wii it is November 2010. The Switch has sold 21.05 million units, while the Wii sold 24.70 million units during the same timeframe. The Wii sold current Switch sales in month 38.

The Wii sold 33.88 million units in Europe during its lifetime. The Switch needs to sell another 12.75 million units to outsell the Wii.

I think the Switch can do it, this the last big holiday season for the Wii and it was way smaller than the two previous ones. The Switch will catch up after that.

I think the Switch can surpass the Wii in the end. Sales have been doing much better in Europe over the years. I do think a price cut is needed there. Wii will have it's last big holiday and then will start free falling. Switch will have another stellar year to tighten up the gap and should be able to come out on top in the next years.

in the comparison it must be considered that Switch are two different portable console, at the time of the wii nintendo was selling DS, this chart compares the Nintendo today with "half"Nintendo of the past

According to this theory, PS5 is also only a half console compared to PS3 and PSP or PS4 and Vita. LOL

sorry but it's a stubid observation, PS5 is compared with PS4 or 3 or even psp etc, not with all Sony consoles.
Nowaday what consoles does Nintendo sells? Switch and Switch Lite, all switch are counted in the cart... (and Switch Lite isn't certainly a home console...)
Yesterday what consoles does nitnendo sells? DS and Wii, and only wii is considered...

But we already have that, there are Switch VS 3DS+WiiU comparisons already. And if you want to compare a single console with the behemoth that was Nintendo's 7th gen... why? The result is going to be clear anyway.

But the Switch Lite is still the Switch, it's just another format, not a different console. It'd be like separating the Game Boy Colour from the GB sales, or the PS4 Pro from PS4. Switch vs 3DS+WiiU is a 1 vs 2 race, but the lower sales of Nintendo's 8th gen make an interesting comparison to the Switch's explosive sales.

Who buys Switch maybe wants to play on the tv, who buys Switch Lite wants play whit a portable console, the games are the same games, but Switch isn't a single console although the pieces almost coincide.
It makes more sense compare to compare
DS and Switch+Switch Lite (both are portable console),
DS+Wii vs Switch+Switch Lite,
and Wii vs Switch both are for playing with a television (but not all Switch owners play in this mode).

Oh no, not here please