Amanita Design’s Machinarium puts me in a perplexing situation.  As this point-and-click adventure has finally made port with an Xbox console, I wanted to reintroduce myself with a world that previously left me with conflicted feelings.  The catch?  Its storefront description points out VGChartz’s heralded “Best PC Indie Game” accolade, amongst several others.  But perhaps there’s something to be gained from this type of review.  A decade-long distance enables a reassessment of what’s under the hood, potentially with more rust than seen at first glance.

You assume the role of Josef, a small robot who’s been dumped into a scrapheap. The goal is simple: get back into the city of Machinarium, confront the dreaded Black Cap Brotherhood, and rescue his robot girlfriend.  The reason why you arrived there and how your metallic damsel needed rescuing aren’t initially known, but the story has enough foresight to sprinkle those details as you go along. 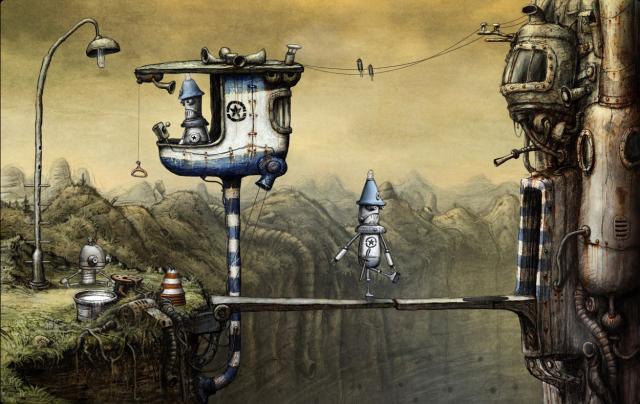 What I admire about the storytelling comes back to something I’ve praised about my favorite game of the past decade: communicating plot points and specific emotions without dialogue.  Outside of the tutorial and text in the pause menu, no language is used.  All breadcrumbs and exposition are communicated via animated thought bubbles.  Whether it’s some kind of comedic mischief the Black Cap bullies instigated against other citizens or simply an item a character wants, this method lends itself so well to inhabiting an otherworldly locale whilst staying tonally consistent.

From the basic description, one can easily glean the grander arcs that'll take place.  There's a damsel in distress, hulking bullies to handle, and some saccharine moments in keeping with its fit-for-all-ages appeal.  Little moments like how Josef conveys his innocence and determination solely through pantomimes sell you on his genuine heart.  Even with such expected templates, Amanita is able to organically inject tangible humanity and wholesome comedy into what's otherwise routine.

Over a decade has passed and these visual haven’t aged a day.  Just as was the case then, presentation in respect to audio and visuals are the standout qualities.  The trademark surrealist style this team is known for is out in full force.  The art style hits this great middle of mixing a light-hearted tone with dilapidated buildings and expressive robots fastened together by used parts and corroded locknuts.  Although not as horrifying, this lusterless steampunk locale harkens back to some of my favorite surrealist paintings.  The details in respect to color, background, world-building, and more simply spring to life. 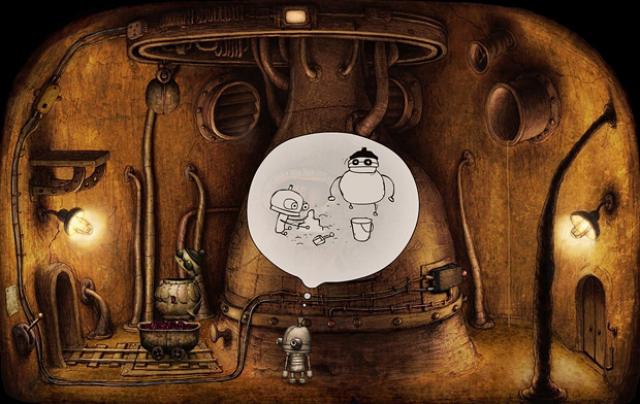 All the more impressive is the technical expertise behind Machinarium.  Bear in mind: all of this was initially developed in Adobe Flash.  Nascent developers may be aghast at that revelation.  The reason why comes down to technique: combining bitmap character models, hard-drawn backgrounds, and other sleight-of-hand tricks to make actions feel fluid and natural.  And though Amanita did phase that out for the DirectX engine later on, it was more of a cosmetic revision to get away from a windowed screen.  This update reinvigorates my previous enthusiasm in saying this deserved best graphics/visuals of 2009.  No offense to Uncharted 2: Among Thieves - still damn impressive - but considering how rich and textured this world feels under those initial limitations demonstrates its longevity, even as we step into normalizing 4K displays.

Although I'm not committed to elevate it as high, soundtrack and sound design also reveal meticulous detail in capturing the off-kilter appeal of the world.  Ranging from electronica to subtle retro callbacks, Tomáš Dvořák ("Floex" being his musical pseudonym) showcases a special ear in capturing the ambience and rhythm of each particular scene.  Sound design isn't a slouch either.  Considering the importance of its quirky atmosphere, utilizing specific thuds, boops, and so on to adequately personify characters is given careful attention as well.

For all of my appreciation of its presentation - which holds up remarkably well to the majority of indie titles in the past decade - my passion for it wanes when gameplay comes up.  Granted, you're dealing with a similar point-and-click framework: a familiar interface to collect and potentially combine items.  Josef also has the ability to extend or collapse his torso, leading to a nice gameplay wrinkle that's used in moderation.  Beyond that, this template falls in line with other pixel-scouring affairs. 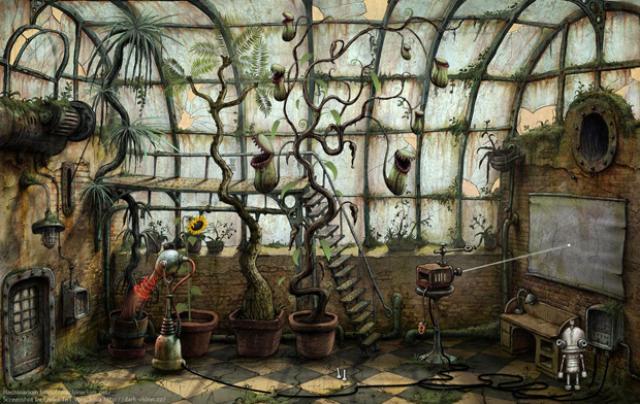 While that pixel-hunting is easily communicated in its succinct tutorial, it doesn't take too long for puzzles to get under my skin.  The front-half of these conundrums are death by a thousand papercuts: some aren't logically sound, others put a nonsensical emphasis on quick reactions, or they may have tedium in mind.  This is compounded by the game's greatest storytelling quality: dialogue omission.  The initial information given is so scarce you're detached from the wider context of the game world and the importance of certain objects, harming the pacing all the while.  Puzzles in the latter half aren't without flaws, but there's a noticeable ascent once you finally get your bearings and have clearer goals, versus reacting to the next "conveniently-inconvenient" situation.

In a weird way, the meticulous visuals have a habit of disrupting its flow.  I understand how that harms the presentational praise from earlier, but I think there's some merit in considering how the grimy landscape makes it tougher to spot valuable objects.  I hate how dumb I feel for missing a critical item attached to a ceiling towards the beginning.  It's easy to dish out the "get good" argument for these instances, but I still dislike pixel-hunting moments that feel so asinine.

Another aspect tied to puzzle frustration would come from the two-tiered hint system.  The first one is simple: clicking the hint icon will reveal one move you must make.  If that's not useful, the walkthrough book gives a point-by-point breakdown of what you need to accomplish within the area.  The problem is it being location-specific; in essence, you may have a ten-step task to complete but the place Josef currently is may only reveal three or four of said steps.  Hope you don't get those as every new location demands you play an awful 2D shoot-em-up to unlock the book again and again.  I understand why you want that hurdle, but considering how disconnected you feel at the start this bland inconvenience will likely be used a few times. 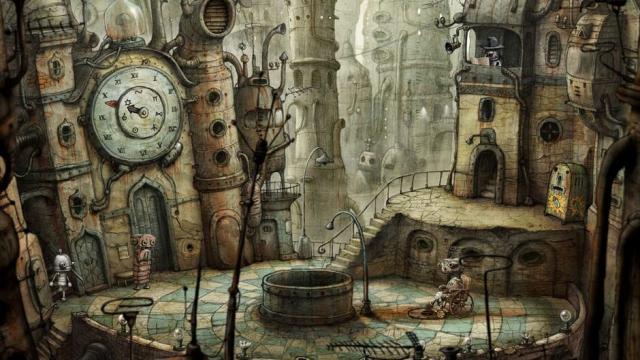 The Xbox One version also bumps into a few minor mechanical snags.  If you make a mistake with Josef in condensed or elongated state and click to move elsewhere he's now dedicated to waddling over to said spot.  Cancelling by way of extra clicks is really unreliable.  Several instances of my icon snapping to Josef's inventory felt uncomfortable as well.  Finally, the walkthrough book is now a total cakewalk.  The PC version demanded you push the up, down, and fire button individually instead of concurrently.

The final consideration is value.  I'm not sure what it is but my total playing time was much shorter than expected (despite forgetting most details).  Discounting any long pauses, I'd be surprised to see if my playthrough took much longer than two hours.  For $14.99?  That's going to be quite tough to grapple with the typical consumer.  And while there are a few easter-egg achievements, the replay value is quite limited. 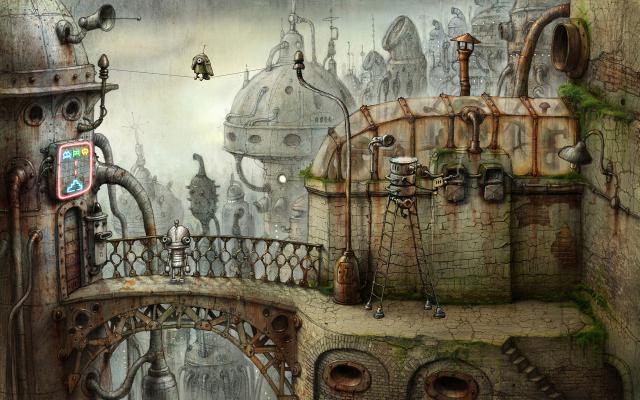 Machinarium is another of those venerated art games that plays with my feelings like a pendulum: an appreciation for the absorbing scenery and the countervailing annoyance of inconsistent game design.  Amanita Design's story behind it, both the limitations they worked with and their artistic intent, make me wish I connected with it as much as I did.  The positives still outweigh the negatives, but I think time has shown Machinarium clearly has some rusty parts.

This review is based on a digital copy of Machinarium for the XOne, provided by the publisher.

Finished both the Vita and PC version of this masterpiece. While I do agree that some of its aspects aged a bit (Samorost 3, for example, is a far more refined experience) I do feel that the score is a bit on the low side. Overall the genre didn't really evolve all that much throughout the years (Telltale did experiment with it, but that evolution had its fair share of issues and turned a bit away from a pure "adventure" style). The game can still be called a go-to title if anyone wants to find out if point and clicks are their cup of tea. Would I recommend some of Amanita's later titles for a younger gamer? Maybe. Is Machinarium still an absolute must? Certainly. Weird that it was ported to the Xone so late. I could have sworn that it was already available on pretty much every platform.

Well, I'm glad you came out of more enthused than me. I mean...I can see that argument for point-&-click adventures, but I think how walking sims have been accumulating more adventure gameplay suggest there's areas to explore. And it's not like playing it safe doesn't afford you leniency, but the fundamentals should at least be sound. That's were I find they fumbled.

Yeah, this only released on Xbox One last Thursday. If you go on Machinarium's wiki page, you'll see just how much they've stretched out port releases after PC. Hats off to their tenacity in getting it everywhere.

That is true. Considering how much flack walking simulators get, they did push the medium forward quite a bit, especially some of the more standout entries like What remains of Edith Finch. Hopefully, Amanita will take a look at those and implement some more experimental elements in Creaks. They already played around with a more gameplay-only aproach in Chcuchel and Pilgrims, so fingers crossed!

Indeed. I'm a big fan of Edith Finch too. I certainly hope so. I'll have to keep them in mind and consider those other games you mentioned in my wishlist. I appreciate you adding to my backlog now! :P