It might not be The Witcher III, but Thronebreaker is a commendable effort from developer CD Projekt Red, one that combines the mechanics of card-collecting games, RPGs, and visual novels into a substantial and handsome package. Some of the game's non-narrative elements—exploration, resource management, and card curation strategy—are underdeveloped or even unnecessary, but extraordinary storytelling and moral decision-making help mitigate any flaws.

Thronebreaker takes place in 1267, before the events of The Witcher game series. The story concerns Queen Meve, ruler of Lyria and Rivia, who fights back against invasion from the southern Nilfgaardian Empire. If you're unfamiliar with the history and mythology of the larger franchise, worry not; it's easy enough to appreciate the players and priorities involved. If you are a loyal follower of The Witcher, though, you're in for a treat: the game features regions previously unseen in the series and even a cameo from everyone's favorite witcher. 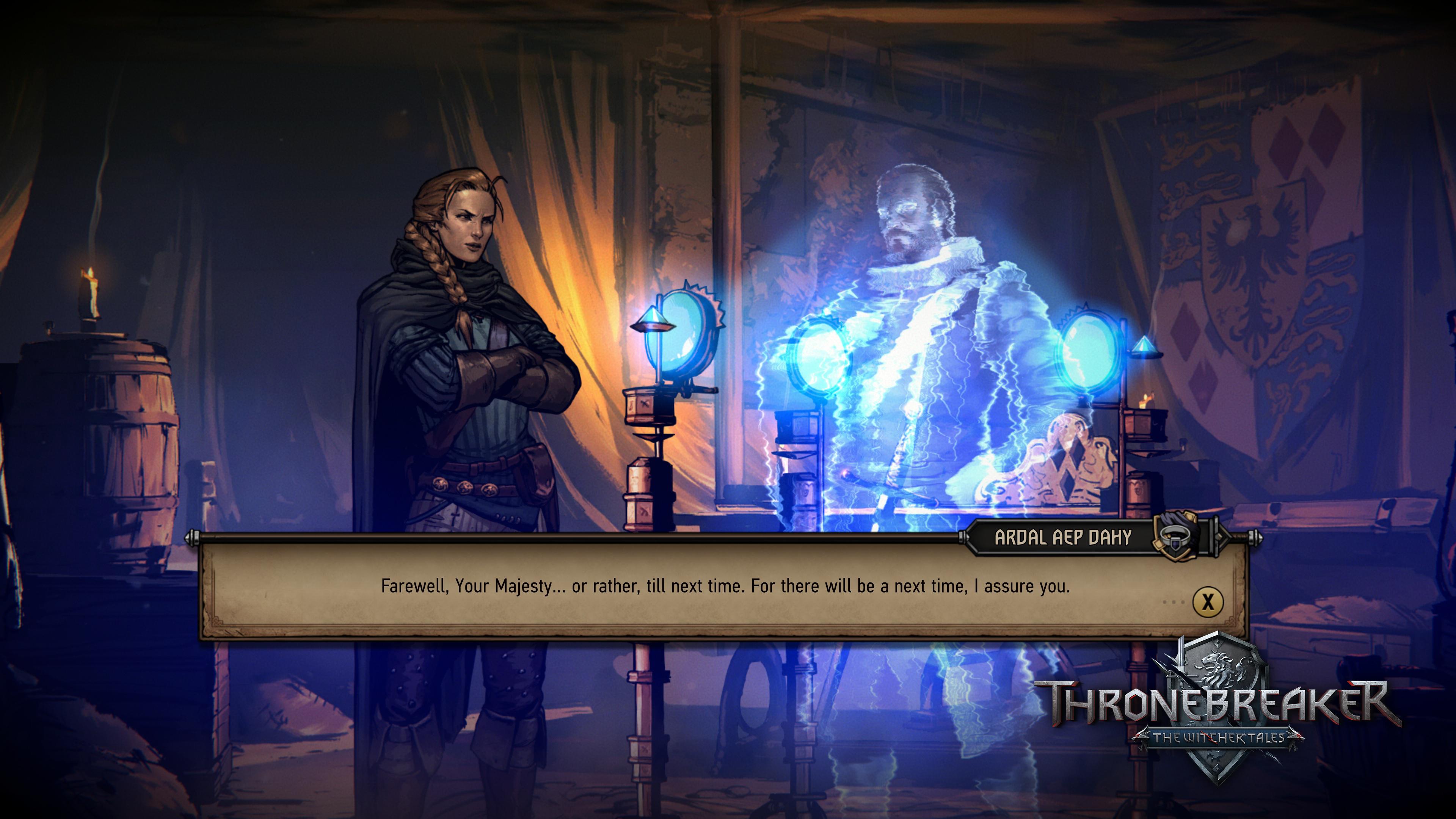 If Thronebreaker has flaws, they certainly don't exist on the narrative side of things. In fact, the storytelling, worldbuilding, and character development in the game are excellent. Meve, a proud and steely monarch who juggles the lives of her soldiers and citizens, is an outstanding addition to The Witcher game franchise, and the supporting characters who cross her path are similarly interesting. Moreover, the wartime setting makes for a gripping story of honor, duty, betrayal, faith, and unlikely alliances. Friends become enemies, enemies become friends, and entire kingdoms hang in the balance.

You'll not simply be a passive onlooker to the political intrigue and plot twists, though. At many junctures in the story, you, playing as Meve, will need to make several tactical choices and moral decisions, which may have short and long-term ramifications. Save an elf from a human lynch mob and it may come back to haunt you. Set a platoon of PoWs free and you may learn the location of enemy reinforcements, but simultaneously lower the morale of your own troops. Thronebreaker is awash in these kinds of agonizing ethical quandaries. You must decide and then you must live with the consequences. 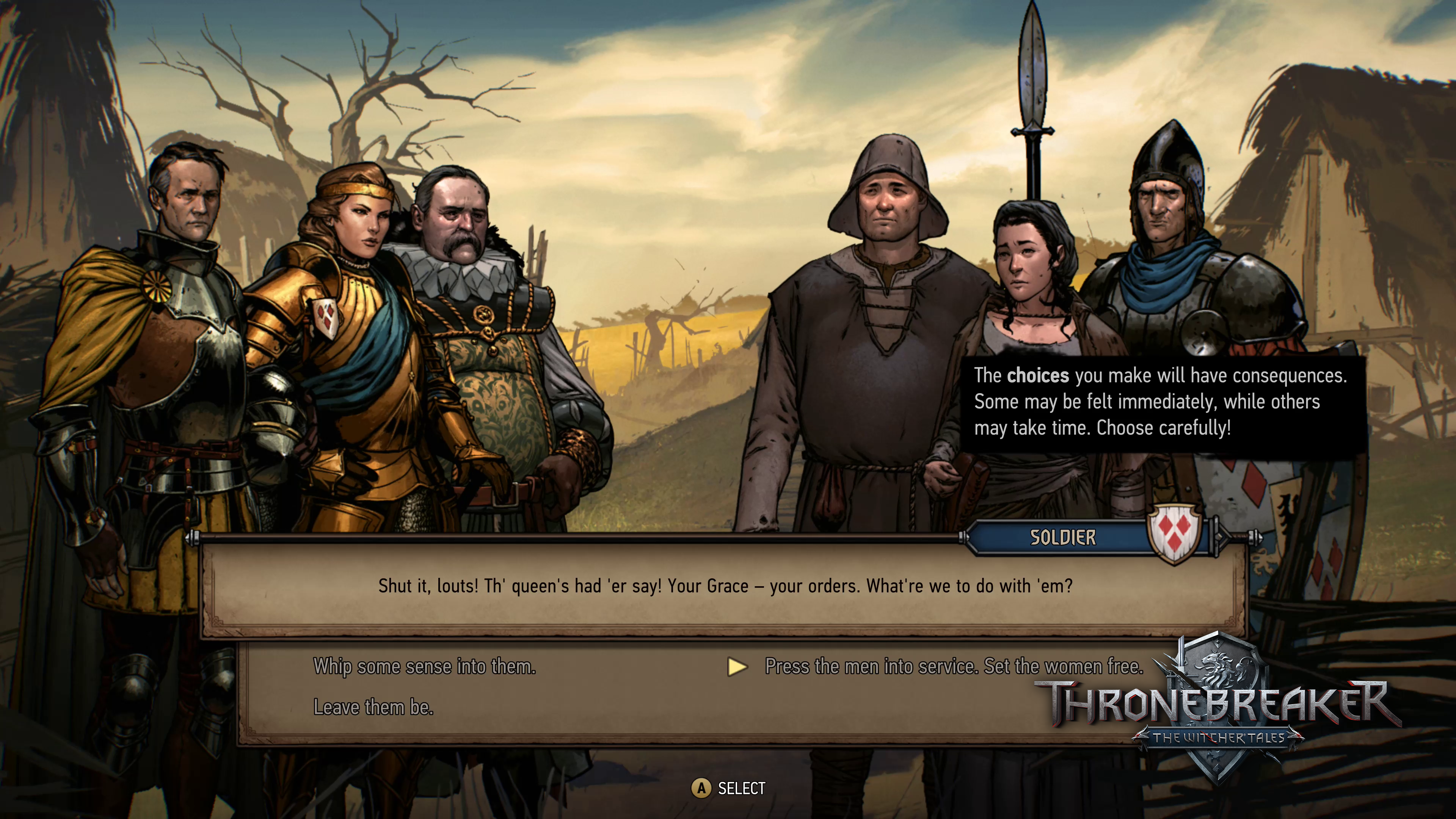 It's clear that CD Projekt Red put most of its energy into Thronebreaker's plotline, world, and leitmotif of moral ambiguity. Therefore, if you value story and character above all else in a video game, don't hesitate to pick this one up.

If story is an afterthought and you prefer a deep, strategic, demanding role-playing card game, Thronebreaker will merely satisfy your craving, not surpass it.

Part card-collecting game and part RPG, Thronebreaker can be neatly divided into three main mechanical phases. The first is non-linear exploration across the game's beautifully-rendered medieval world. The second and most essential is the card battle system, based on a modified form of the mini-game Gwent from The Witcher III. The third revolves around the camp menu, where players can craft new cards and purchase upgrades using resources. 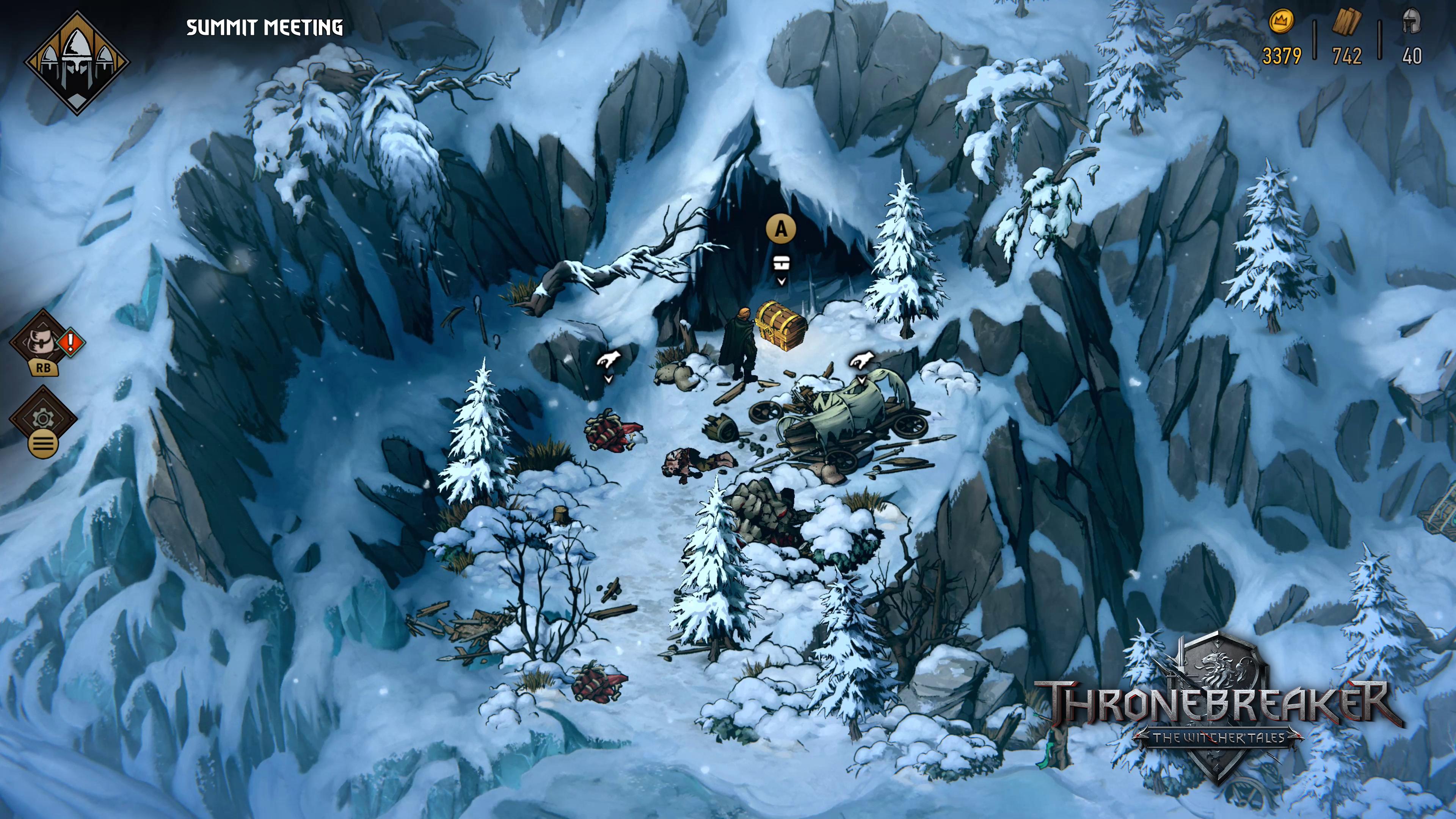 The overworld in Thronebreaker is the tissue that connects its battles, puzzles, and story beats. From an isometric perspective—think Diablo or Baldur's Gate—you'll explore the lands of Lyria, Aedirn, Mahakam, etc., visiting villages, farms, castles, forests, caves, and mountains. Thanks to painterly graphics and parallax scrolling backgrounds, the world looks amazing, yet the act of moving through and exploring the lovely scenes can feel mechanical. You'll move slowly from place to place, finding piles of loot and holding the A button to claim them. The game world is immersive, yes, but it's missing a rewarding sense of discovery.

On your journey through the north you'll also take part in battles, with Nilfgaardians, elves, bandits, wraiths, and other dangerous enemies. Each battle is represented by a round of Gwent, the signature card game of The Witcher franchise. Thanks to a substantial tutorial at the beginning of the game, even Gwent neophytes can wrap their minds around the game's rules and tactics. 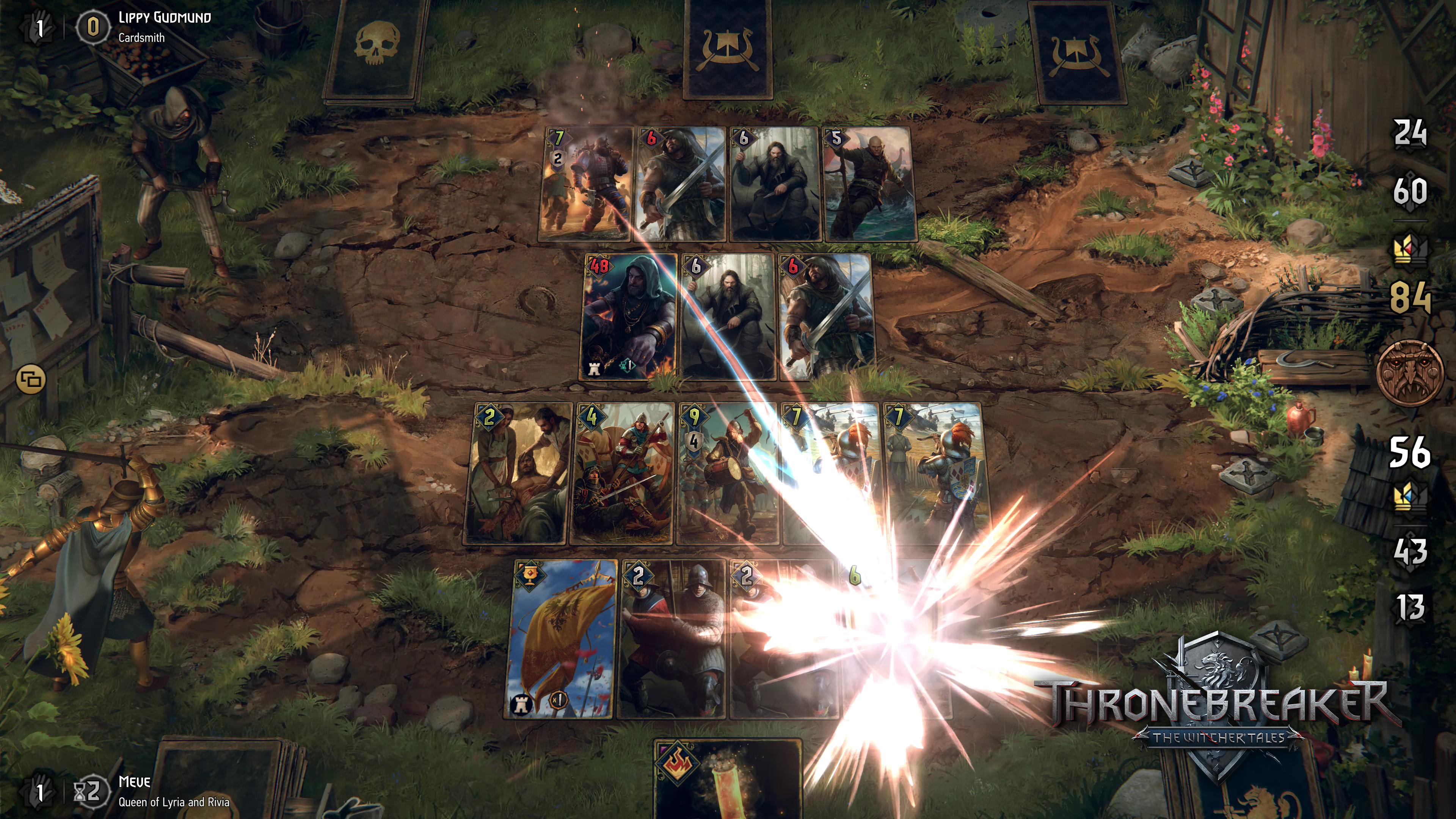 Here's how it works: two players draw cards from decks of at least 25 cards and place them one at a time, in turns, on a board with four rows—two rows per player. Each card has a power number. If, at the end of a round, your collection of remaining cards shows a higher power rating than your opponent, you claim victory; do so in two of three total rounds and you've won the game. Thanks to cards with unique powers, countdowns, and order abilities, the game is great fun. Locating and exploiting the logic of an individual card—for example Wagenberg, which damages an enemy row by the magnitude of friendly cards placed on its own row—is always satisfying.

The big issue with Thronebreaker is that by embracing an RPG structure and focusing deeply on narrative, it sometimes undercuts its own efficacy as a card-collecting game. Very rarely will you experience an actual full-length game of Gwent, where you need to manage your cards across three rounds, forfeit a hand so you can live to fight another round, or think strategically. Far more often you'll deal with a story battle or "puzzle" battle with a unique set of circumstances and victory conditions that lasts only a single round. CD Projekt Red keeps things interesting this way—you'll need to prevent a wyvern card from consuming all the sheep cards on a row, or attack alley cards until one is revealed as an escape route—but the absence of consistent rules and long-term strategic thinking ultimately hurts the experience. 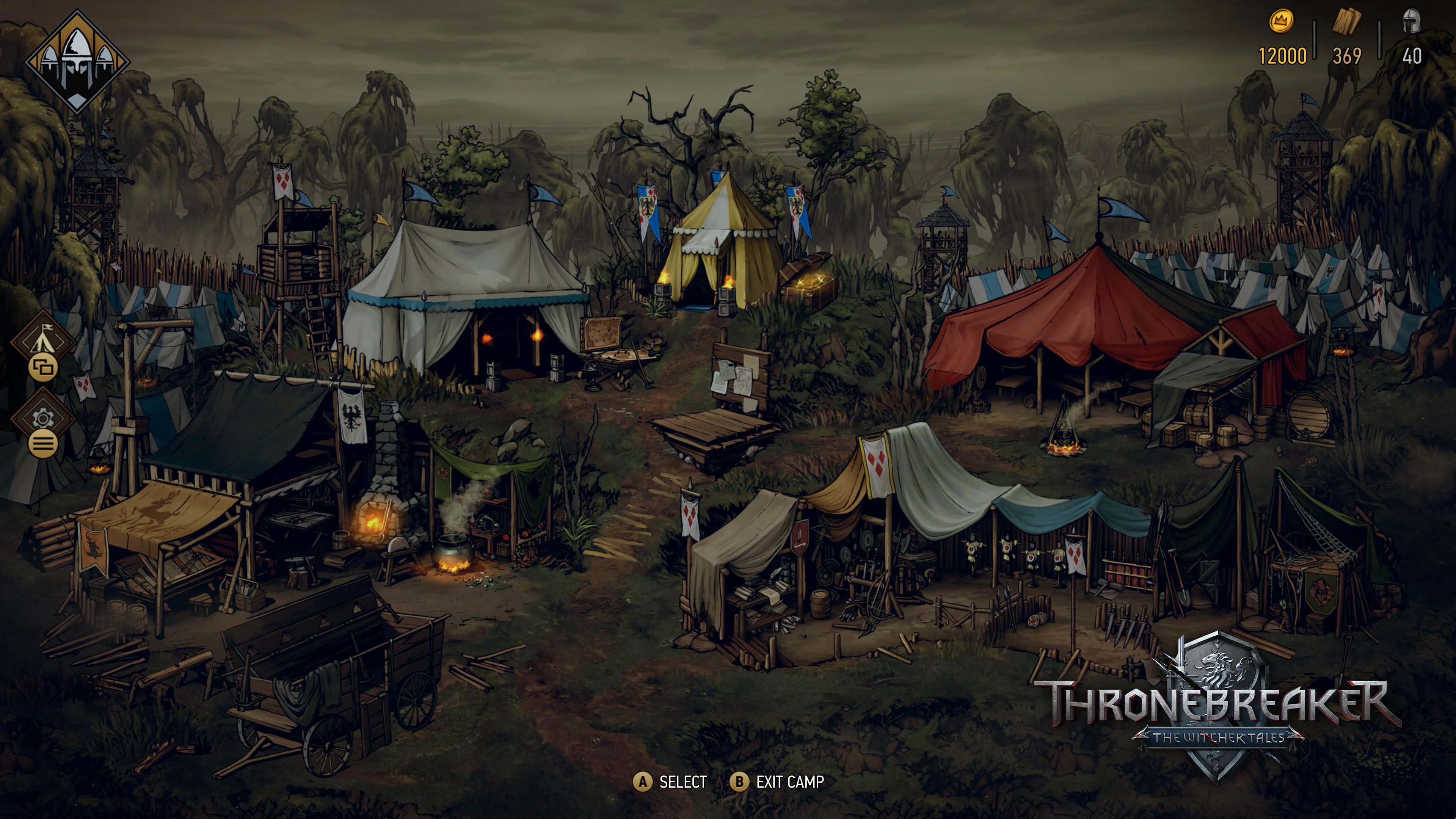 It also makes the game rather easy. On normal difficulty you can breeze through the entire first act without crafting a single card or reorganizing your deck. A couple of useful card pairings and tactics will carry you to victory. Starting in act two the game becomes more challenging, thankfully, but again you can usually succeed without much card organization. Apart from a few difficulty spikes, including an overwhelming final boss, Thronebreaker won't make you break a sweat—particularly if you know Gwent inside and out.

Even though it's not necessary, you can still unlock and upgrade cards via the camp menu. There are several stations at your disposal. From the Command Tent you can curate your deck; from the Royal Tent you can view objectives, letters, and other correspondence; from the Workshop you can create new camp structures, which grant access to new cards and other benefits; from the Training Grounds you can test your deck against an AI opponent; and from the Mess Tent you can converse with your companions. 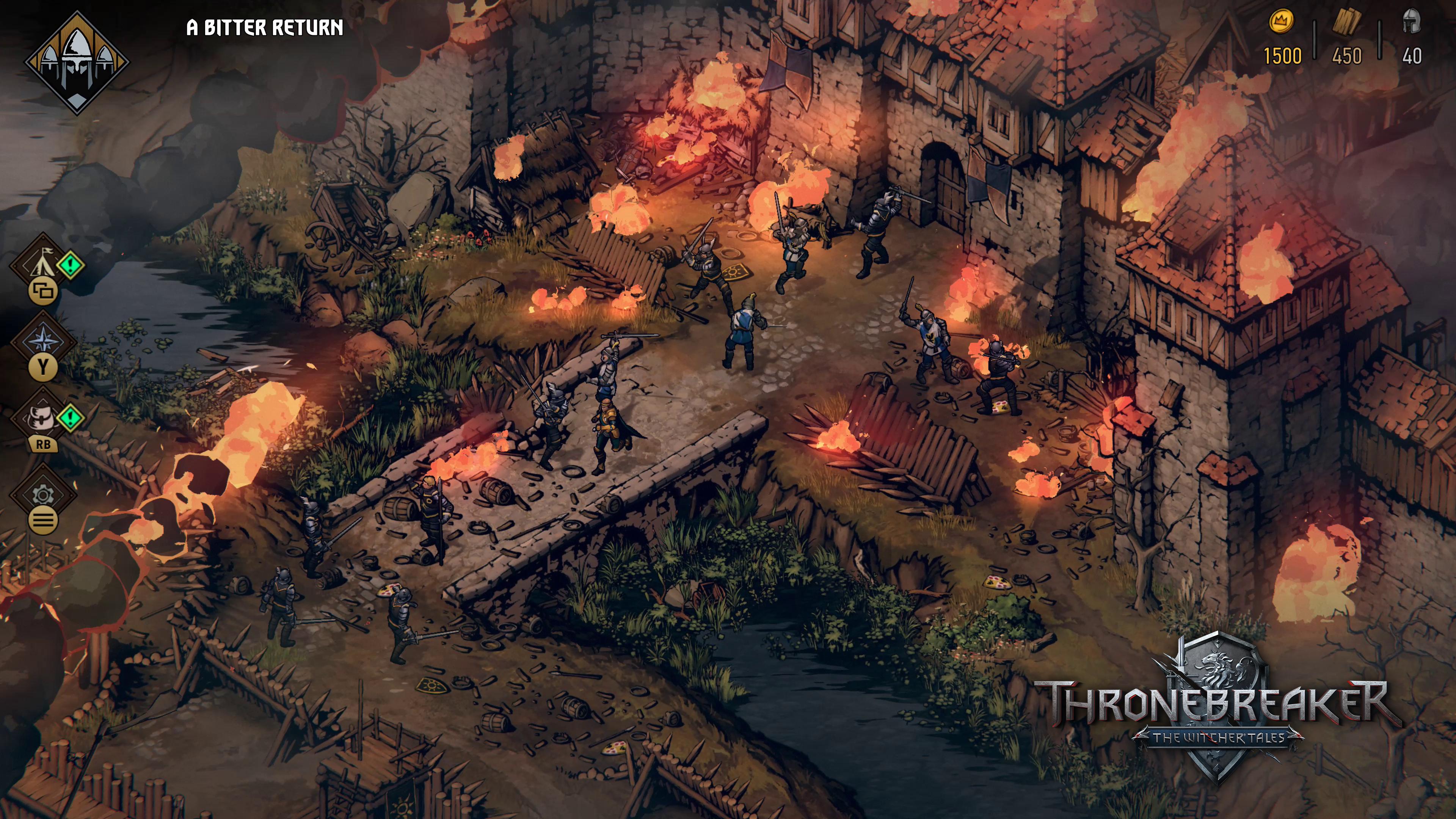 When you combine the facilities of your camp with the game's large overworld, myriad story battles, optional "puzzle" battles, and expansive narrative, you'll discover an adventure filled with dozens of hours of entertainment. Expect to spend 30+ hours on Meve's quest. If you're a completionist, make that 40 or more.

Accompanying all that content are the aforementioned lovely visuals and vistas, plus rousing martial music and some fantastic voice acting and sound design. Overall, Thronebreaker is a polished, attractive experience with impeccable art direction. Minus a strange technical hiccup where the AI opponent delays its move (as if it is thinking of which card to use), the Switch version performs admirably.

Thanks to a lengthy campaign, high production values, and a fun core of card combat, Thronebreaker is a welcome addition to The Witcher family. While it never achieves greatness as an RPG or card-collecting game—due to perfunctory exploration, inconsistent rules, and easy encounters—it excels on the storytelling front. The characters are layered and sympathetic; the twisting, turning plotline engaging; and the moral dilemmas fascinating in their unintended consequences.

This review is based on a digital copy of Thronebreaker: The Witcher Tales for the NS, provided by the publisher.

Shame that the difficulty is imbalanced. I really like the Gwent mechanics and I was hoping that this game will have different situations requiring a specific deck/strategy. I may still pick it up at some point.