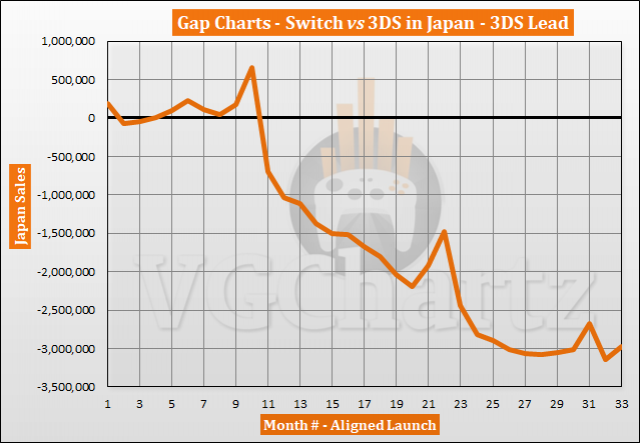 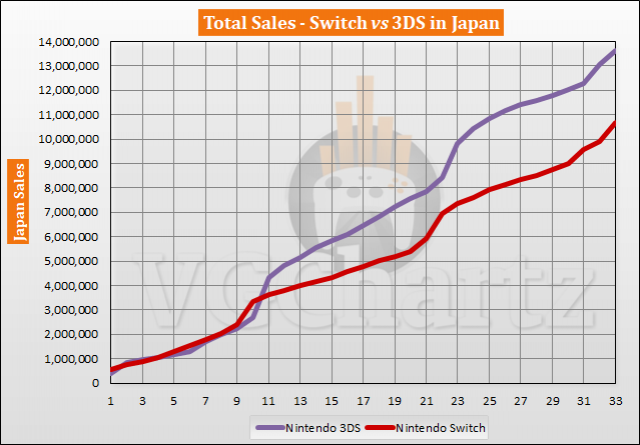 November 2019 is the 33rd month that the Nintendo Switch has been available for in Japan. During the latest month the Switch closed the gap to the 3DS by 175,534 units. In the last 12 months, the 3DS has outsold the Switch by 1.05 million units. The 3DS is currently ahead of the Switch by 2.98 million units.

The 3DS launched in February 2011 (however, 3DS sales have been aligned to March 2011, since it only launched at the end of February in Japan) and the Nintendo Switch launched worldwide in March 2017. The Switch in its first 33 months has sold 10.67 million units, while the 3DS sold 13.64 million units.

The 3DS has sold 24.56 million units lifetime in Japan through October 2019. The Switch is currently 13.89 million units behind the lifetime sales of the 3DS.

I’m expecting Switch to win December so the 2019 gap should be less than a million. Decent showing for the Switch in the year that 3DS got Pokemon X/Y and Monster Hunter 4. 3DS has a blockbuster software year in Japan in 2014 with Yo-Kai Watch 2, Pokemon Ruby/Sapphire, Monster Hunter 4 Ultimate and Smash Bros, but I think Switch can close the gap slightly in 2020 with Animal Crossing being a huge turning point. Switch should have much better legs in Japan than 3DS in 2021 and 2022 vs 2015 and 2016. So the overall race should be close.

Sorry if this is a double post. Did we both end up being correct?
http://www.vgchartz.com/article/442227/switch-vs-3ds-in-japanvgchartz-gap-chartsdecember-2019/

I was unsure if we both had the same conclusion about sales, but merely looked at the numbers a different way.

Switch resisted pretty well until now, and starting next year, it should close the gap again

The 3DS did peak rather early, so I agree the Switch will be closing the gap in 2020.

Switch should have very similar lifetime sales with 3DS (25 million), but way better legs. This year is going to close the gap by a good margin. (3DS had a massive drop in the 4th year)

If Switch follows a similar pattern to 3DS, I think it should end up in the 15-20 million range.

3DS peaked very early, there's no indication that the Switch will follow a similar trend, quite the opposite in fact. Switch will probably catch up upon the 3DS over the next years and potentially surpass it later down the road.

Currently it has a 2 million lead on the Wii and growing with no signs that Wii will ever move to close that gap, only occasionally manage to slow how fast it widens further. That would put 15 million as the absolute minimum, but a very unlikely minimum. Most likely that gap will only grow, considering the gap grew in Switch's favor by almost 3 million this year, and it only has 2.1 million to go to pass Wii's LTD sales altogether, I'm thinking that final gap will be at least 5 million and change, which would put a more realistic minimum at 18 million. Switch's 3DS gap is currently about 3 million, which would put the maximum at about 21.6. But there's a decent chance that the Switch won't drop off in sales quite as quickly as the 3DS did, and that the gap might close or even reverse. I'll hedge my bets and say it at least keeps pace and reverses a little bit, but not completely, and put the maximum at 23.

So I'd estimate 18-23 million for Switch in Japan. That would put it above every Nintendo console except maybe the NES, depending, and with a decent chance to outsell the PSP, the PS1, and if I'm only a bit low with my estimates, maybe even the PS2. In such a case, aside from probably the 3DS, only the Game Boy and DS would outsell it in Japan. Now mind you at current regional sales ratios between Japan and other regions, that would put global sales at somewhere between 80-100 million, which seems possible but a bit low for Switch, but then Japan often seems to see consoles start to die off before other regions, at least it seems to me, so maybe those ratios will widen and translate to global sales of 90-120, which would be more in line with its trend in comparison to the PS4. Or I might just be underestimating Switch in Japan and Bofferbrauer is right.