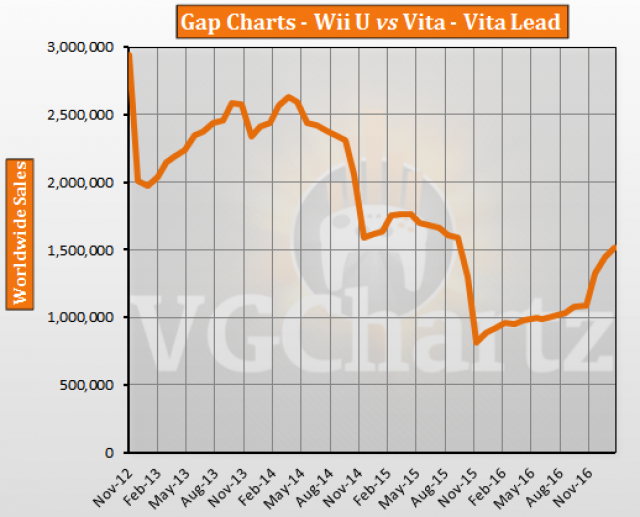 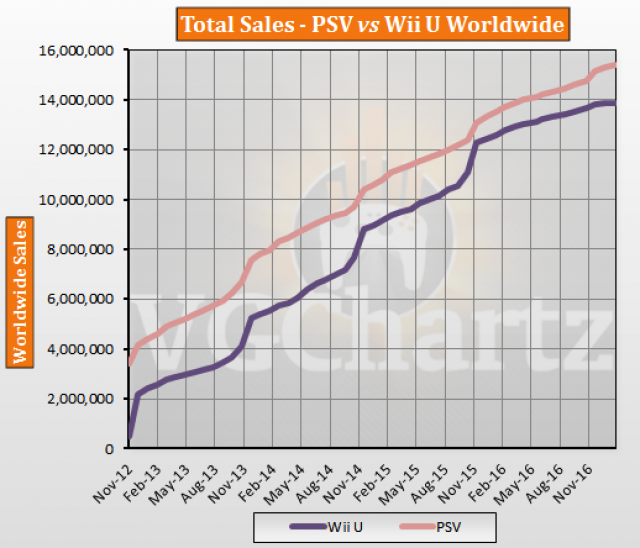 What's wrong with some of you? You're actually getting upset over a WiiU vs. Vita chart and the comments relating to it?

I'd equate getting mad about this race to be the same as guys at a horse race screaming and cheering for the 2 horses at the very back of the pack long after the race is over... they're still just there at the side lines yelling for their favourite of the two to win... even though the race is over.

And both horses have been shot in the head by their respective owners hours ago.

What a cruel fight !

Also wii u must be adjusted down by 300k in NA ( basically usa ) and a bit in France, even though the errors are within the margin.

This get five likes.. In a similar comment about psv, I'm being downvoted, attacked and calumniated from the usual suspects...
Anyway, I'm exposing the sales tracking errors even of my favorite consoles because I'm an objective person ( and adore vgc, so I care for its accuracy ), okay as much as objective can a gamer who likes a specific company can be!

In the past I would not expose them but I matured as a vgc member and understood that this would not be a good thing.

I felt the need to express that, even if it sounds like self-victimization...

Yeah, the hypocrisy going on here is spectacular. VGC true colors for you.

Yeah, the hypocrisy going on here is spectacular. VGC true colors for you.

How much longer til we admit that this doesn't matter anymore?

It mattered enough for you to open the article

It mattered when people were saying the Wiiu was going to outsell the Vita within weeks.

When Sony gives us software and hardware numbers for the PSV.

So much hate in these comments... lol
Deal with it guys, PS Vita sold better than Wii U!

So, you are the one who downvotes?
What's you rationale? I don't care for the accuracy of the site if my favorite console has outsold my...?

KEEP DOWNVOTING... LET'S SEE WHAT MODS HAVE TO SAY ABOUT THAT... VITA VITA VITA... I ONLY ACCEPT OBJECTIVE PEOPLE TO ACCUSE ME... DO YOU UNDERSTAND?

Jesus Christ... Could you stop spamming my post? I downvoted your posts because I didn't agree with them, Ican downvote any posts I don't like (otherwise there wouldn't be this feature). Where is the problem?

We're different. PSV may have outsold wii u even if it's overtracked.
I only care for vgc to fix a huge error! Mainly because, they were doing a pretty good tracking before a specific mistake.

I don't get your problem. There are so many things on this site which are undertracked/overtracked and where we have a proof for it. We have no proof for PS Vita sales being overtracked, all the numbers we have are pure speculation. I don't get why you want PS Vita sales to be fixed. You don't own the console, sales of the system are abysmal, why are you trying everything to show that they are overtracked (with no real proof)?

The problem is the ''so much hate''...
LOL Where's the hate on saying that psv is proved to be way overtracked?

@Dr Vita, he wants vita adjusted down because he doesn't want the Wii U to finish last this gen. When in reality it doesn't matter because even if vita does get adjusted down and the Wii U adjusted down too, the vita still wins because it's still selling.

Kerotan, I have stopped talking you as you know, for reasons that even your fellow sony fans concur!
However, here you're slandering me...So I will have to answer.
Did you read that comment?

We're different. PSV might have outsold wii u even if it's overtracked.
I only care now for vgc to fix a huge error! Mainly because, they were doing a pretty good tracking before a specific mistake.

I'm not like you... Obsessed with console wars you provocative frog!
You were aching for psv to be above wii u...
LOOOOOOOOOOOOK ABOVE I'M TALKING ABOUT WII U OVERTRACKING TOO, ALBEIT IT'S NOT A BIG ERROR...


GOOD BYE FROG... This is the last time that you refer to me, and you intervene in a discussion with me and another person...
Who's say that? Not me, wait... ;)

I think he Dr Vita generally means hate as in... people replying to posts all in caps repeatedly yelling for an answer :> I'm fairly sure that qualifies as internet hate when you go full caps over something like this.

Those Vita numbers are not real, deal with it.

You have a better source? Feel free to share and shut us all up

Lol tak this is the third time you've said you'll never talk to me again and yet here you are. I'm afraid you do care for their sales as do I. That doesn't make you a fanboy or console war soldier. It means you are interested in VG sales.

If any post here is provocative it's yours to me and Dr vita. Quite ironic since you are claiming it about me.

You all need to knock it off and stop derailing this article.

The following articles regarding that comparison, will be funny if vgc ever puts psv back where it was, when they were tracking rightly ( before mistakenly adjusting up by a lot... )People seeing 15.4m now when they may see it with 13.4-14.4m in the upcoming articles.

Lots of Nitendo and Sony beef in these old article comments lol. But really bad sales for both consoles back then :'(

According to VG Chartz the Wii U sold more software! And that's with a much lower install base.

The Vita has no games argument was true after all.

Vita has many Jrpg and waifu games though.

On PS Vita much software than WiiU is sold via digital because of the game tied to the account and not to the console, especially the PS One classic or games that aren't available retail (i'm talking about japanese games not indie and stuffs like that) wich are a lot for PS Vita compared to the WiiU.

Sony need to do their part and give us numbers

Consider the Digital sales of Vita games from the fantastic PSN store that Sony have been fine tuning for the last 10 years over the Eshop which Nintendo still haven't been able to get in any respectable shape for years now, it's still an absolutely shambles even on the Switch.

Title availability etc are all factors which a rational person should be taking into account.

Are you implying I'm a rational person? I feel offended by your comment >:/

I thought you were memeing at first, seems I wasn't wrong

If only those PsVita numbers were real...