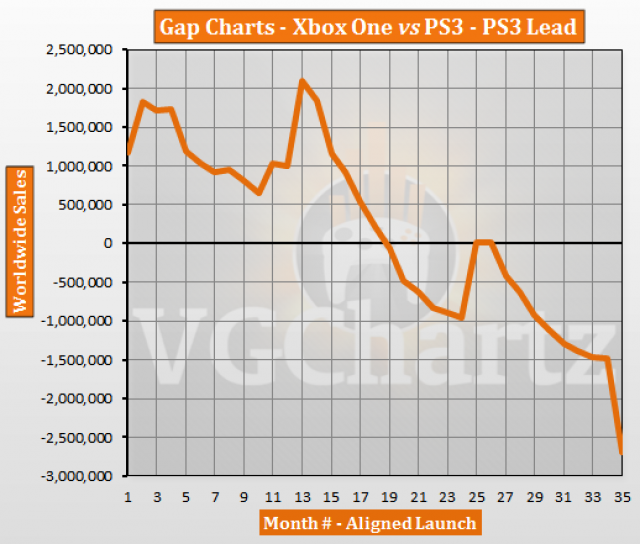 Funny how PS3 was still gaining ground on the XB1 when the S released.

How can the PS3 be considered a failure if it's doing better than BOTH the 360 and Xbox One? What does that make those consoles?

Wild successes according to the school of "Put Your Fingers in Your Ears and Say La La La".

Considering the PS3 cost Sony 4bill in RnD and needed to be butchered heavily to push itself on the market means that the PS3 wasn't exactly making Sony money, not for a very long time.
You can give a console away for free and claim it has sold over 200m units, that doesn't make it a success.

You say butchered, I say "beat Xbox after an awful start, higher pricetag, and coming out a year later".

That has nothing to do with a console being a success(the company who made it doesn't need to make money).

The PS3 sold more than the Xbox One even with a 600US$ price tag. Now that the PS3 got a price reduction, the gap is only growing.

Because the PS3 was compared to its predecessors. The Ps1 and PS2 were doing a lot better than the PS3, which was disappointing.

Heh, bring up the R&D of the PS3 which went into the cell, at least some great technology came out of that, in comparison to what the X360 is known for costing MS money with, those warehouses full of RROD'd systems, really advanced the gaming world, at least now console makers know how to solder chips correctly.

The PS3 did? As far as I know it lagged behind until after the gen was over...

@AsGryffynn: X360 actually lagged behind just about every week worldwide. I only finally passed 360 after Gen 8 started because it had to overcome both an awful start and a later release.

because financially it was a failure. total sales are great, but they took massive losses originally to get those sales due to the cost of machines and the YLOD disasters. If you are just looking at total units sold then it is undoubtedly a huge success.

YLoD wasn't a "disaster". Not in the same sense that RRoD was, anyway.

Giving it another shot I respect that and I agree with you.

The PS3 is beating Xbox One and the Xbox 360 when sales are aligned from their launches. This is another win for Sony over Microsoft in console sales.

Vgchartz enlight me why PS3 isn't a failure, it nearly vanquished all the profits the PS2 and PS1 made.

I consider the Wii a very successful product, because it made money and was innovative. I consider the PS3 not succesfull for obvious reasons. I guess it's popular to bash on Wii. Anyway the downvoting seems to become worse these days. In the past people took the effort to criticize some statements with facts here. These days every opinion that isn't favourable by some community members get down voted for threshold.

Nah, it mostly just stagnated the industry with shovelware. Though, to be fair, PlayStation and Xbox are doing the same with shooters.