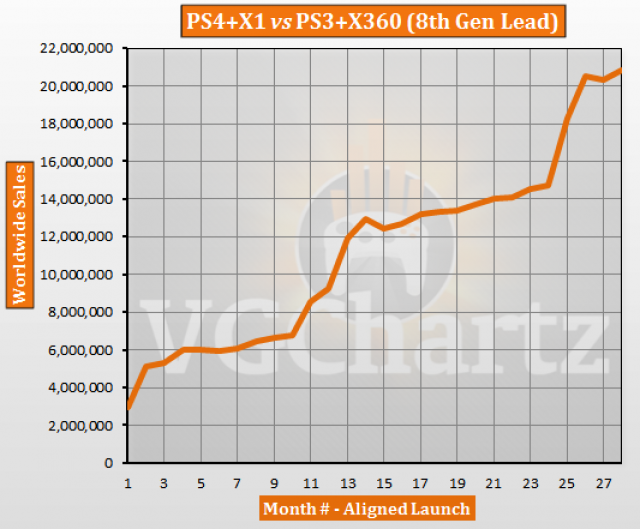 Given how Nintendo has been such a wild card these past three generations, comparisons like these are perhaps a more accurate assessment of the overall health of the console market as PlayStation and Xbox have consistently been "conventional" consoles in every sense, while the Wii and Wii U, despite being good systems with great games, were anything but conventional. I've been doing PS+Xbox-only sales for comparing gen-over-gen sales in the U.S. for months now in the forums. So far, it's looking like the console market is still doing very strong overall (Japan being the one exception). The one caveat of this particular comparison, though, is that the 360 & PS3 had very late peaks compared to pretty much every other console, so the gap may start to narrow here in about 2-3 years, but I think the PS4 & XBO's combined lifetime sales will be comparable to those of the PS3 & 360.

i don't even think the ps4+xb1 will win. We are talking about over 170 million consoles. 360 is still tracking behind xb1 aligned but it's probably gonna sell double lifetime

I didn't say the PS4 & XBO would "win." I said they'd have "comparable sales." The XBO will likely sell considerably less than the 360, but the PS4 should sell considerably more than the PS3. It's far, far ahead of the PS3 right now globally, and in Europe is actually selling nearly on par with the PS2. It should sell anywhere from 100 to 120 million lifetime, with the XBO selling about half that.