If you grew up watching Transformers in the 1980s, then the new action game from Platinum, Transformers: Devastation, is something of a dream come true. It's a love letter to the series that captured kids' imaginations and emptied parents' wallets. It allows players to fight as legendary robot heroes like Optimus Prime, Bumblebee, and Grimlock. What's more, it's genuinely fun to play.

Anyone expecting an operatic storyline from Devastation should prepare to be disappointed. It's mostly the same 'heroes and villains' stuff the Transformers universe is well known for, with the dastardly Decepticons trying to take over the world and the honorable Autobots striving to stop them. It's all in good fun, though, and there are a lot of cameos and nods to Transformers mythology along the way. 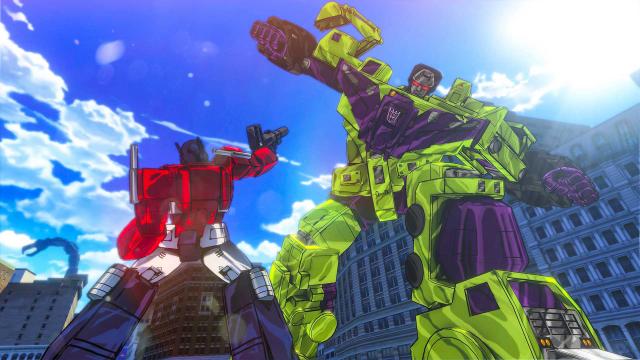 Like many of Platinum's titles, Devastation is a hack-n-slash action game. Players control one of five Autobots - Optimus Prime, Bumblebee, Sideswipe, Wheeljack, or Grimlock - as they barrel their way through seven chapters, slicing and dicing Constructicons, Insecticons, Seekers, and bosses. Borrowing from titles like Devil May Cry and Bayonetta, Devastation focuses around fluid combo attacks, a grading system, and a dodge mechanic that temporarily slows down time.

What makes the combat in the game particularly memorable and unique is the combination of robot and vehicle moves. For example, after Optimus performs a combo with his light and heavy melee attacks, he can transform into his trademark Kenworth K100 cab and finish off the enemy. It's incredibly satisfying to dart around each combat arena, slowing down time, landing combos, and transforming back and forth between a hulking robot and a fast-moving vehicle. 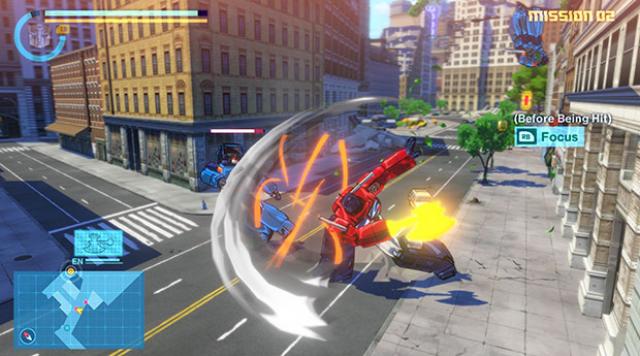 In addition to melee combat, the game offers plenty of third person shooting. Each Autobot can equip up to three projectile weapons, and use them in both robot and vehicle mode. Thankfully, Platinum has allowed some mixing and matching. Want to equip Bumblebee with Starscream's Null Ray? Go for it. Care to switch Optimus Prime's signature Energon-axe for a pair of steel swords? Why not.

All of this is possible courtesy of Devastation's loot and upgrade system. By beating enemies and looting hidden chests, players can collect health items, power-ups, and mystery weapons. By returning to "The Ark," which is accessed throughout the game world in specific areas, players can equip the Autobots with different weapons, synthesize new weapons, and add perks by spending in-game credits.

The perk system, unfortunately, is unreliable. Players create perks by spending credits and playing a mini-game but the results are wildly inconsistent. Sometimes a "failure" will produce a powerful perk, and a "success" will create something pedestrian. Nevertheless, these customization options add much-needed depth to a game that, while entertaining, is lacking in variety.

Most of Devastation is simply moving from point A to point B, where a large combat arena and swarms of enemies await. There are some secret items and side missions scattered around, which spice up the proceedings, but in general levels are there just to funnel players from one fight to the next. 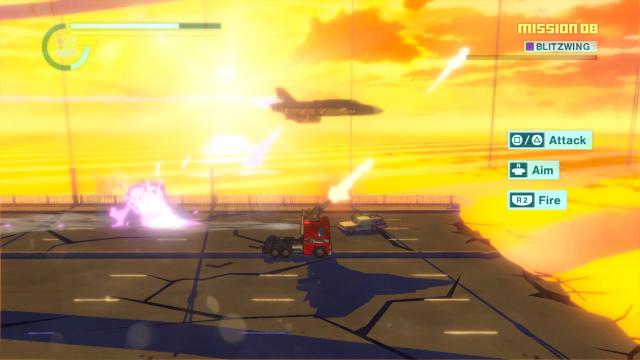 Despite some average level design and repeated scenarios, Devastation succeeds because it's so fun to play. Combat is fast, fluid, and tactical. Boss battles come early and often, and sometimes involve teammates joining the fray. And, with secret items and bonus challenge stages, Platinum provides enough motivation to replay the game, which runs about five to six hours long.

Having been granted access to the Transformers property, Platinum could have mailed in a sub-par action game and called it a day, banking on the brand to carry the game. Instead the developer has crafted a solid, if unspectacular, hack-n-slash game that honors the subject material and respects its fans. There's a lingering sense of deja vu and the levels are dull, but the action is deep, rewarding, and joyful. What's more, the characters you know and love are front and center, and as awesome as ever. Transformers fans, rejoice.

This review is based on a retail copy of Transformers: Devastation for the PS4

they really nailed that transformers cartoon look and feel. which is great! pretty good game and special for fans of the series.

Yeah, it's on my Black Friday & Christmas period radar, but not a full price purchase.

Could you do a multiplat review on the Xbox once in a while? Not all of own Sony systems. Other than a barely noticeable resolution difference, all games look and play the same.

If they are all the same then why should they do the xbox one version? Just look at the ps4 critic and add a barely noticeable resolution difference and you have the xbox one critic for you.

Also PC reviews of multiplats would be nice, especially when there are actual glaring differences that aren't the same across all plats.

This game should get a dlc just as long as the game itself. It will make this short game an average length game

Your website is very useful. People will learn a lot from it. You have done a good work. Keep on posting. I appreciate your work. <a href="http://www.coc-vip.com”>clash of clans astuce</a>