To the Moon - Review

Editor's Note: This review was originally published on November 16th, 2011.  We are republishing it to remind people of this amazing title which won our Adventure Game of the Year award for 2011 since it just recently released on Steam.  Remember, if you love narratives in gaming and don't own To The Moon then you're a terrible person.

I've played games all my life and, sometimes, after playing one established series after another, it can start to feel like the industry might not have any surprises left in it anymore. Luckily, every now and then I come across something truly unique. It becomes a reminder to me of how full of potential the industry is, and rekindles my love of gaming. To the Moon isn't a perfect game by any means, but the atmosphere and story are so superbly conveyed that I can recommend it to anyone that loves a good tale in their games.

To the Moon is the story of two doctors from a company advertising that it can make any single wish come true... for a price. Johnny is an old man on his death bed, and he has employed Doctors Neil Watts and Eva Rosalene to fulfill his final wish - his dream of going to the moon, something that he was never able to accomplish in his lifetime. Obviously Watts and Rosalene aren't from NASA, so they don't have the ability or authority to physically send someone to the moon, but they can do the next best thing, which is make Johnny think he went to the moon. By traversing Johnny's past through his own memories, you can make a whole new lifetime's worth of new memories by convincing his younger self to pursue his present self's dream of a lunar adventure, thus overwriting everything he's done and giving him the life he always dreamed of. Story is the real star and focus of To the Moon, and it shows. The interaction between the two doctors gives off a great 'odd couple' vibe - Watts makes some hilarious jokes and Eva insults him profusely. Johnny and his wife, on the other hand, constitute the serious aspects of the story, featuring some heart-rending moments. The romance between these two is truly beautiful and something I've never seen before in a game. Lots of games have romances in them, but nothing as nuanced and real as the one in To The Moon. It's hard to describe without giving anything away, but I'll say that I was genuinely impressed by how Freebird Games were able to use relatively simple presentation to give clues to the difficulties in their relationship; I've never seen a pixelated character pull off shy and apprehensive quite like River does.

Along with one of the best stories I've ever had the pleasure of experiencing in a video game comes some stellar presentation. While it isn't anything technically masterful, To the Moon shows you how pixels can still have a certain quality to them, to the extent that the use of pixels is actually preferable to the times when the developers use a hand drawn art style for a handful of scenes. There's an emotional nuance to the pixelated look, and I don't think the hand drawn portions added anything above and beyond this. While the graphics have their ups and downs, the sound design is utterly immaculate. There isn't any voice acting, but the music has a haunting poignancy that'll stick with you. One song in particular(sung by Laura Shigihara) ranks alongside "You Were There" from Ico as one of my favorite songs from any medium, let alone in games, and the scene it's used in quickly became my favorite.

Not quite an RPG, but not a typical adventure title either, To the Moon is a game that ends up becoming more a visual novel than anything else. The graphics and character control all harken back to 16 bit classic RPGs like the Mother series, but you'll never take part in any battles. What you'll actually be doing is more akin to the item hunting and interacting of an adventure game, though instead of using them to solve puzzles, it's the simple act of discovering these items that moves you along to the next area; it turns out that you can only access Johnny's most recent memories directly, and you have to find memorabilia from events further in his past in order to work your way towards his younger days and plant the lunar seed.

Usually before you move on to another area you'll have to solve a simple puzzle of flipping rows/columns of tiles in an attempt to get all the squares the same color. The puzzles never take more than 30 seconds or so to complete, but the game does keep track of how many turns you use and tells you the minimum possible, so perfectionists could take longer trying to think up the perfect strategy. To the Moon isn't really about puzzles though, and most of the time you'll just be exploring the environment in an attempt to better understand where you are and continue the story. Starting from the end of Johnny's life adds a sense of mystery, as you find out what events made him and River the people they were and what hardships forced them both to make mistakes. The conclusion leaves the story open for further episodes, but I wasn't left frustrated because although Eva and Watts will move on to another patient, the story of Johnny was fully told without any need for, or hint at, revisiting it. While it's easily one of the best told stories in the industry, it's not as long as I'd ideally like. That could be because I didn't want something so wonderful to ever really end, but I would've liked at least some replay value, or more length for the price. $12 will get you about three and a half hours of sublime story-focused gaming, though, so it's still a great value prospect even if it isn't perfect, and I will likely replay it one day just to repeat the experience.

To The Moon is that special kind of game that, while I can't recommend it to everyone, I think there's a certain subset of gamers that will find this to be the perfect way to spend an afternoon. Those who think story needs to be lessened for gameplay to become the sole focus of the industry will likely find this disgusting, but a beautiful story filled with romance, strife, humor, and some of the best music this side of a Team Ico game is probably the only thing that could have torn me away from Skyrim right now. This is my first foray into the games designed by Freebird Games and Kan Gao, but it certainly won't be my last. I really can't wait to see where this series goes next, and if you give it a chance I think you'll be waiting with bated breath right along with me. 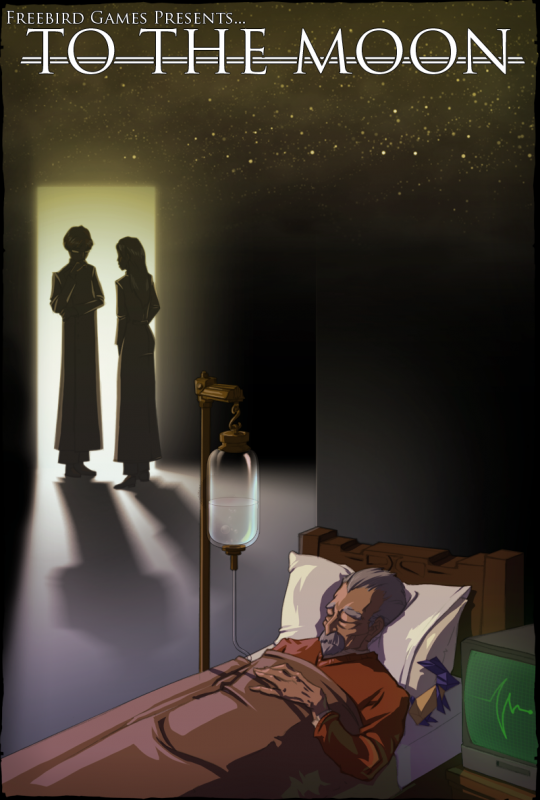