It all started with a green dinosaur, 23 years ago. He was Mario’s trusty steed in Super Mario World - a living, breathing power-up in a game full of many other inanimate items. It was that game that introduced the world to Yoshi, an enigmatic green dinosaur who won the adoration of many players. That undying love for the most adorable dinosaur ever created led to 1995’s Super Mario World 2: Yoshi’s Island, a series prequel starring Yoshi as he led Baby Mario through a turbulent adventure en route to his parents' doorstep. Since then, Nintendo has released the occasional new Yoshi game to try and recapture the magic of this title, with mixed results. Now, developer Arzest has cooked up a new Yoshi adventure, Yoshi’s New Island, and while things may look sunny side up on the surface, the game is actually a bit scrambled. 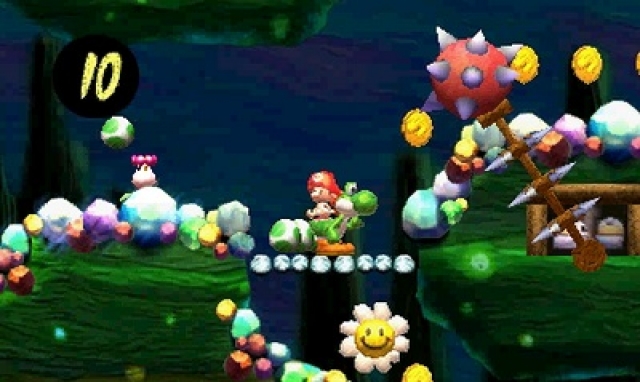 In this new adventure, Baby Mario and Luigi are again attacked by Kamek the Magikoopa in transit from the stork factory to their parents’ home. Baby Luigi is kidnapped, but Baby Mario escapes and lands near a pack of Yoshis. While this is happening, Baby Bowser has taken control of Egg Island and made it his new evil vacation home. Baby Mario can sense where Baby Luigi is and the Yoshis agree to lead Baby Mario to his destination.

Yoshi’s repertoire of skills from prior titles carries over to New Island. He can jump once followed by a flutter jump that greatly increases horizontal distance with a slight vertical boost. He can grab enemies with his tongue, then spit them out or swallow them and instantaneously lay them as an egg. These eggs can then be thrown at objects or enemies and serve as Yoshi’s main form of combat. Care must be taken not to get damaged, however, as Baby Mario will fall off Yoshi’s back and begin to float away in a bubble. As Baby Mario floats, a countdown will tick away and if it reaches 0, Baby Mario is kidnapped by Kamek and his goons. 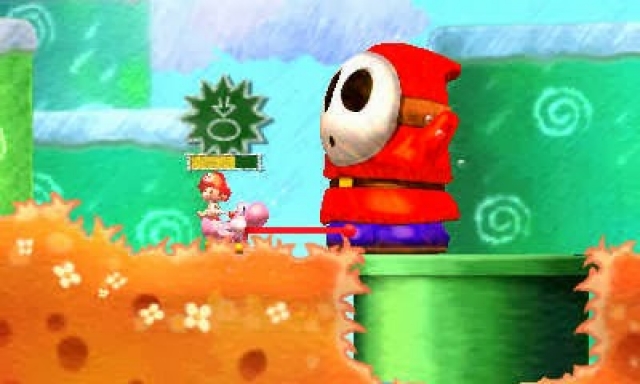 If this all sounds familiar, that's because it is. In fact, despite being called Yoshi's New Island, there is very little that is new about this title. Environments look identical to those from past games, from the macro-level of the settings down to the micro-level of the enemies, platforms and objects. While it can be fun for old gamers to feel the nostalgia of their past adventures, a game needs to do more than talk about the old days to be memorable. New Islandintroduces two mega egg powers that can cause widespread destruction: the Mega Eggdozer and the Metal Mega Eggdozer. Swallowing a giant Shy Guy allows Yoshi to quickly pass it through his body and create an enormous egg (in what should earn our dinosaur friend an achievement for gastrointestinal fortitude). Tossing this egg will cause an egg-streme demolition in its path. The metal version weighs Yoshi down, allowing him and Baby Mario to walk underwater. They're nice additions, but this is the only new thing that Arzest contributed to the established series formula. They did include a local multiplayer mode which has players competing and cooperating in small mini-game challenges, such as collecting coins via flutter jumping or breaking balloons with egg tosses, but this is more of a diversion than an impressive addition.

Each of New Island’s levels has three things to collect: red coins, flowers and little star creatures. Unlike traditional Mario side-scrollers, Yoshi's New Island's levels are untimed, which encourages players to search every nook and cranny and collect everything. Its collection logic is very friendly - you won't likely be screaming in agony over a hidden object. Secrets often exist where you see a platform or two branching off the main path. Invisible clouds can be discovered pretty easily by jumping into an area that looks tantalizing, like it's asking for you to take a look. Coupled with the happy-go-lucky atmosphere that is a staple of the Yoshi series, it becomes a relaxing jaunt through the game, unlike many other, more stressful platformers. Yoshi can once again transform into various machines and vehicles, like the sled, the jackhammer, and the fan-favorite helicopter. These transformations are part of short, minigame-esque segments of levels and are controlled primarily by the 3DS's gyro controls. These were fun little bursts, but I wished that the transformations could have been used more often in the game and for longer periods of time rather than shoehorned into their own sections. 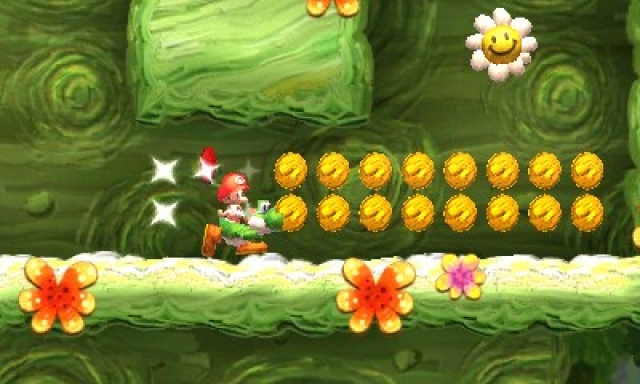 I realize that art style is a subjective concept that can be viewed wildly differently by multiple people, but I am not a big fan of Yoshi's New Island's choice of aesthetics. In 2D, the polygonal character models clash with the backgrounds and give off a weird, out-of-place vibe. In 3D, the character models and backgrounds appear on different layers and it becomes less of an eyesore. Still, this art style looks a bit muddy and is less engaging than the eye-popping, colorful sprites used in past Yoshi titles. The soundtrack fares better, as it fits the relaxing playstyle of the game, but if you go into New Island hoping for a song as memorable as the Athletic tune, you're bound to be disappointed.

Other than the lack of new additions, New Island's biggest flaw is that the game is too easy. Modern Nintendo platformers have begun to settle into a pattern: the first one or two worlds introduce players to the game and let them have fun with minimal consequence. Then the game drops the kid gloves and begins pushing the player with challenge after challenge, with each level making the player earn their victory. Yoshi's New Island is an easy adventure with simple level design for much of the ride, and by the time the player starts to feel tested, they've reached the last world in the game. In one sense, you could say that New Island is a Yoshi game for a new generation, as the youngest gamers weren't even born when the original Yoshi's Island game first released. But most of you who are reading this review are more seasoned gamers that don't need an introduction to the genre, and for this group, New Island rarely offers that thrill of facing and then surpassing a difficult challenge, even when going off the beaten path to grab collectibles. 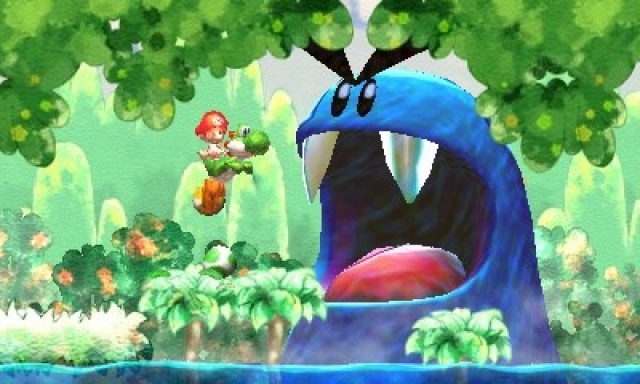 There isn't anything inherently wrong with Yoshi's New Island. It brings back the atmosphere and mechanics of past Yoshi titles and provides new levels to experience them in. But New Island relies too much on what has worked before and copy-pasted it onto a blasé platformer, thus not achieving the magic that made the original Yoshi's Island so enjoyable. The end result is a decent platformer that does a workman's job but doesn't aspire to be among the greats. It is a game that will inevitably be forgotten as time goes by.

This review is based on a digital copy of Yoshi's New Island for the 3DS, provided by the publisher.