Publisher and developer Earthwork Games in a press release sent to VGChartz announced the physics-based RTS, Forts, has sold over one million units worldwide. The game released for PC via Steam on April 19, 2017.

The Forts - High Seas DLC is set to launch later this month on Friday, March 25 for $9.99 with a 20 percent launch week discount. The DLC adds a new water system, new campaign, floating fortresses, weapons, and missions.

"Forts has come a long way since launch in 2017," said EarthWork Games Founder Tim Auld. "The High Seas DLC is an expansive update with tons of content to enjoy, but as we look to the future, we also want to thank the amazing community who have supported us in the five years since Forts launched. We can’t wait to share Forts - High Seas on Friday, March 25, 2022!"

Forts is a physics-based action-RTS, where players are challenged to construct custom bases and destroy their opponents in a battle for the last of Earth's natural resources. Construct an armored fort while collecting resources. Arm it to the teeth. Develop your technology to unlock advanced weapons, then target weak points in your opponent’s fort. Shoot down incoming missiles and patch up damage before your fort comes crashing down. Defend your reactor at all costs! 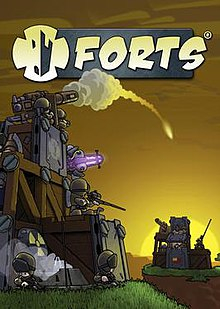