I hate moving house, it’s nearly all stress, from the inevitable breakages, to putting your back out trying to jam a washing machine in a space that’s a millimetre too small. Fortunately, Unpacking does away with all these stressful elements; no heavy lifting or breaking things, and no rubbish to clear away. Everything unpacked just needs a place to go.

Describing itself as a ‘zen puzzle game’, Unpacking does exactly as the title suggests. Opening up in an isometric pixel art room, you unpack, one by one, all of an unseen character’s belongings, placing them as orderly as you see fit into household spaces to enable progress to a new house and new rooms. None of the usual puzzle gaming pillars exist of time limits, or scores to beat. Belongings often don’t have specific spots where you have to place them, although certain limitations exist on where, and what room, items can be left in to allow you to move on. For example, leaving a toaster in the bath tub would be frowned upon, though if desired even that element can be turned off in the accessibility options. 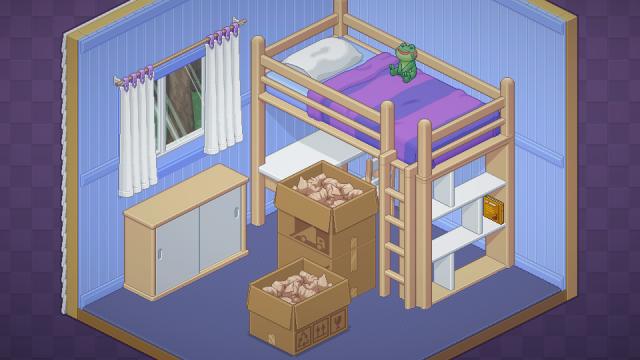 The zen puzzle element in play is itself a pleasant experience. It really is a slippers on, feet up, chilled out affair, though if anyone is watching you play as you stack those different sized books randomly, as opposed to the ‘correct’ method of descending height order left to right on the shelf, it may not be as relaxing as it should be. The Xbox controls are fine, and the stick speed can be adjusted if necessary, though it does seem it would be more suited to using mouse controls on PC.

The pixel art gives the whole experience a lovely nostalgic feel and is really well considered, allowing objects to be easily identifiable (albeit once or twice it was a slight struggle to do so), and thus an idea of where an item should probably be placed is pretty intuitive  - though again, once or twice, I found the required item placement somewhat obtuse and needed a trial and error approach to progress. However, depending on fulfilling certain criteria, that approach may give the player new in-game art stickers available for use in photo mode. 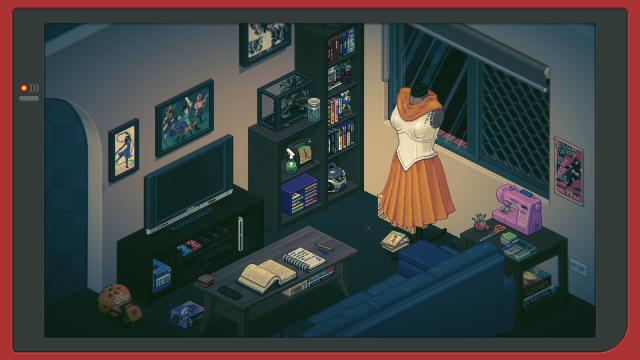 The music, by Jeff van Dyck, is perfectly attuned to the style of the game, while the sound design is also on point, with soothing ambient noises of chirping birds, or the hum of outside traffic, interrupted only by our unpacking sounds of boxes tearing or the popping out of a frame, while clanks of cutlery and clinks of ceramic plates when stacked only add to the ambience.

In and of itself this would amount to a nice, but probably forgettable, experience. However, the genius move by developer Witch Beam is in attaching a young girl’s life to these belongings, as we almost voyeuristically dip into her story during eight house moves over a twenty year period, via thoughtful and clever environmental storytelling as her ‘unpacking ghost’. There's no big exposition drop; you get a changeable line of written dialogue alongside a photo of each move, which depends on the room you finish last. This frames the scene, while you tease out who she is and her story, sometimes from the house itself and sometimes from the belongings already in the house, combining any information you garner with her personal, and sometimes intimate, possessions that you unpack. You get a feel for what is important to her, the items that bring her nostalgic comfort, and as there is a certain ambiguity attached to most objects, I found myself inquisitively attributing little stories to certain trinkets like a small model of the Eiffel tower, which I imagined she picked up on a trip to Europe before starting university. 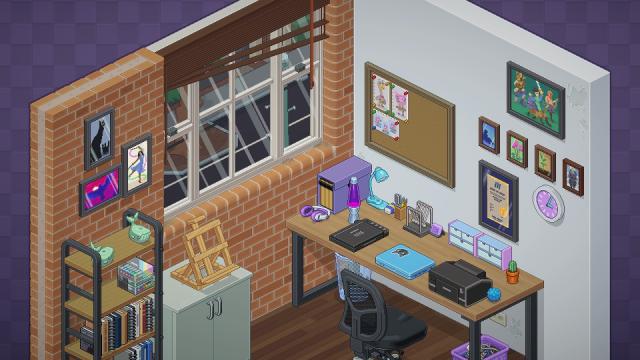 By the game's very nature, some repetition and patience is required of the player over its five hour or so runtime (give or take dependent on approach), as you unpack and place a fair amount of the same objects in consecutive houses, and while there was a point during playing where I found it mildly too repetitive, it does help define what value is placed on her belongings. The end result being to highlight new items when they appear and what they might signify, and when something has no longer been packed - perhaps lost, or left behind intentionally and discarded - you notice it.

Unpacking is a lovely game to play, a thoughtfully crafted experience where an empathetic approach rewards the player. Slight moments of repetition and occasional confusion don’t detract from a synergetic experience where there’s so much more to unpack than simple possessions.