Time loops are quietly becoming all the rave these days.  Although not before Eiji Aonuma &Yoshiaki Koizumi (Majora's Mask), writer/developer Nick Pearce was technically ahead of his other time loop-inspired contemporaries.  It's a humble origin story of insane dedication to a Skyrim mod that netted him industry writing awards and the drive to make a full game.  Now with a budget, a bigger crew, professional voice actors, and so on, his studio's first title arrives nearly five years after that mod.  Will it be remembered?

You’re miraculously saved by a mysterious Karen (really) from drowning in the Tiber River.  In keeping with her reputation, she presses you to find someone who'd wandered to some nearby ruins.  After stumbling into an elegant bathhouse and reading a cautionary note, you enter a portal transporting you back ~2000 years into a now-restored Roman city.  This awe-inspiring place, hidden within a cavern, has some drawbacks for its 20 some inhabitants: there's no escape and all are governed by "The Golden Rule."  The latter is what The Forgotten City's central themes hinge upon. 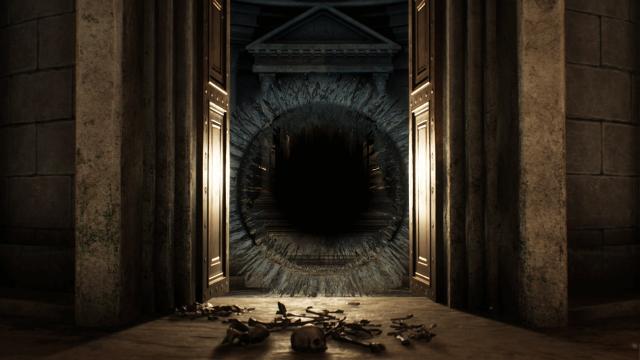 Imagine being in the Roman Army.  Think of some grave offenses committed by several unknowns within your cohort and your leaders' form of discipline being decimation (the shortest straw drawn in a ten-man group is executed by the other nine).  Now, imagine if one sin meant punishment for everyone within your community without impunity.  A simple theft would result in all trapped dwellers turning into golden statues.  That's doomed to happen to all of Magistrate Sentius' people, but this portal to another time is his back-up plan.  With Sentius’ guidance you can discover who's destined to doom them and end the time paradox.

This preamble may be a lot to take in, but the story succinctly doles out this information along with hints for important revelations.  With respect to its moral conundrums, politics, character personalities, and more, no time nor sentence feels wasted.  Some exposition is saved by the strong environmental storytelling too.  The grandiosity of this underground, mythical world keeps your attention in part by unsettling you.  The gilded remains of past sinners are mottled across the place and they always seem to move their head right after you look away – aurally suggested by metal rubbing against metal.  All of these elements come together like interlocking gears, and it's quite impressive how many are turning 20 minutes in.

How these townspeople assess & occasionally stretch The Golden Rule makes interactions and dilemmas so engaging.  What constitutes a "sin" to the unknown god's eyes?  How does your modern-day understanding conflict with the Roman residents'?  These questions are supplemented with various questlines (primary and secondary) to accomplish before the prophesied sin is committed.  Being out of the timeline doesn't mean you’re incapable of triggering the sin yourself, either by an obvious action (murder or theft) or incidentally revealing it through dialogue.  Accomplishing that, the world loses its color and Dennis Kleinman's stentorian voice booms throughout the entire cavern: "the many shall suffer for the sins of the one!"  Fortunately, the reactive dialogue options for your reset limits repetitive exposition. 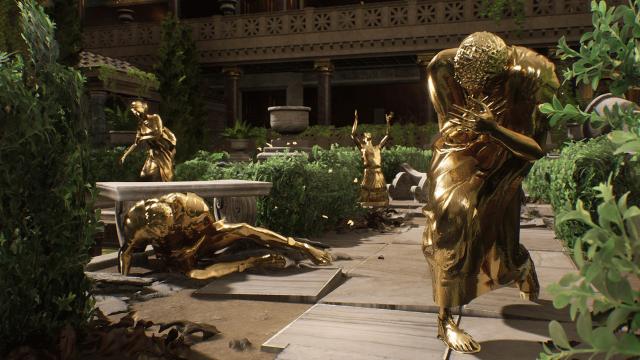 If there's one adjective that captures The Forgotten City it would be "well-composed."  A great amount of work went into incorporating real-world history (Roman, Grecian, Egyptian, etc.), both in the writing and level design.  Even side characters with mere 5-8 minutes of dialogue can be so memorable because of the set-up and payoff in examining how empires inherit – or plagiarize – past myths.  Rather than just refashioning Skyrim's world to a cool Roman-era backdrop, Nick Pearce put in the work to make every location contain something worth discovering.

These points are supplemented by respectable, if uneven, presentation.  Despite having a list of actors I didn't immediately recognize, the majority still handled their roles professionally.  The contention for underwhelming facial animations & lip syncing is a tough one to level against such a small team, but it's tough to outright ignore either.  The lion's share of gameplay is navigating dialogue options with close-ups of everyone's robotic mannerisms, after all.  I should stress that it's not bad per se either; only that the distraction coached me into focusing on subtitles more often.

In sum, I can't be fast enough in shelving this narrative as one of 2021's best.  It's not without some quibbles beyond the presentation, namely in not having more flexibility with certain dialogue options; however, any blemishes don't compare to the meaningful ideas studiously explored.  What's more impressive is that these concepts feel organically integrated within the characters and the overarching plot. 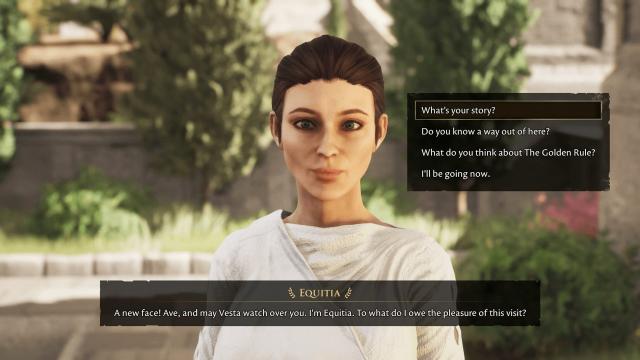 For as exactingly as The Forgotten City's story handles its time loop conceit, the gameplay is less-accurate by comparison.

The template is still molded by the adventure/walking sim sub-genre, but there's also a modest smattering of puzzles, action, and role-playing dialogue options.  Though not insanely complex, puzzle-solving keeps your attention with a non-linear approach.  Whichever goals I pursued first may be different from yours, but neither will feel like a 'lesser' option.  It's reminiscent of Warren Spector's near-decade-old criticism of open-world games going "a mile wide but an inch deep.” The possibility space within the city block is highly interactable, can trigger a fail state that'll require you to reset the day, or lock you out from talking to critical characters.  There's an implicit reward to exploring each inch of the world.

Although the puzzles are intertwined with the world and world-building, it's annoying how often the answer is quickly handed to you.  On top of gold statues turning their heads, you'll occasionally hear whispers through them unheard by (almost) everyone else.  It adds a bit more to the atmosphere, but will also outright tell you how to tackle every situation.  It's really obnoxious too, since there's clear signposting within the environment already.  The same issue extends to the sparse bow-n-arrow combat sections.  They're mechanically basic already, but the few times 'combat puzzles' are used the answer is hastily given. 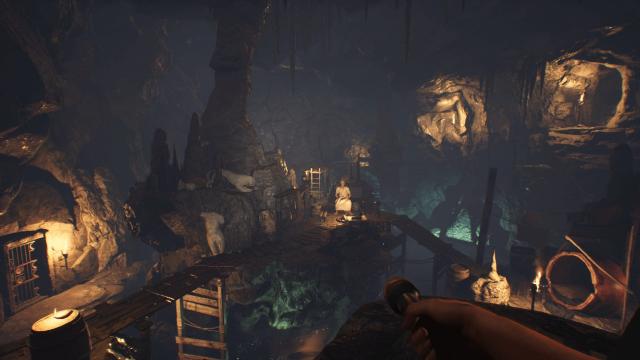 From a design perspective, The Forgotten City's time loop conceit also doesn't feel like it reaches its fullest potential.  In contrast with villager schedules in Majora's Mask, the majority of interactions and plot developments are static.  Sure, there's plenty of fun to be found conversationally; for example, you can fool an obnoxious merchant into giving you thousands of denarii ad infinitum – and it won't constitute a sin either.  Caveat emptor, as they say.  But there isn't a 'time mastery' element a la Groundhog Day.  Think about dedicating one loop to learning all about new monotheistic cultists (Christians), which'll inform your next run about finding an heirloom or a key within a certain time window.  It could've gone beyond an in-game reset button with all your gear in tow.

On a brighter note, Modern Storyteller does an admirable job on atmosphere and world design.  The contrast of splendid Roman architecture hidden within the side of a mountain, and capable of sustaining a village, never got boring for me.  Even though there's a helping of in-game loading screens and NPCs clipping through objects, it's still relatively polished and I never experienced any framerate issues on Xbox Series X.  There were infrequent sound issues with respect to simultaneous NPC conversations flooding my headphones though.  Finally, Michael Allen's soundtrack succeeds in capturing the awe and unease of the world. 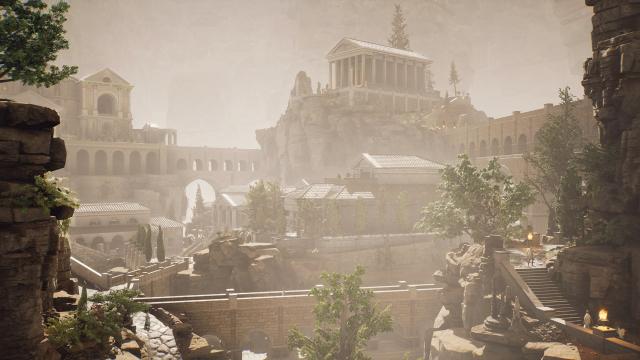 Like several recent developer stories, the humble origins of this freshmen studio feel like a shot in the arm for this industry.  But it's not getting a pass on that alone.  From a consumerist perspective, its asking price ($30) feels worth it because greater value is discovered the more you learn about this interesting world.  Some reservations about The Forgotten City's game design keep it from attaining Legion-dary status among the new wave of time loop games, but its exceptional narrative ensures I won't forget it either.

This review is based on a digital copy of The Forgotten City for the XS, provided by the publisher.