Switch vs 3DS and Wii U Sales Comparison - February 2021 - Sales 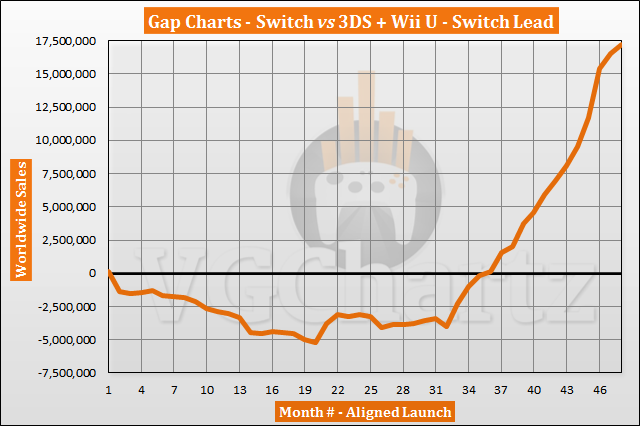 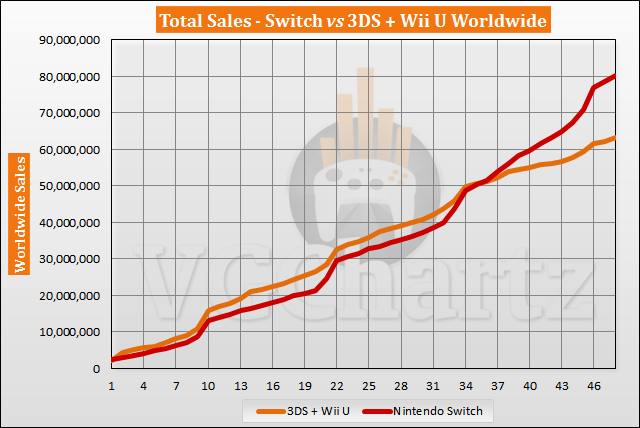 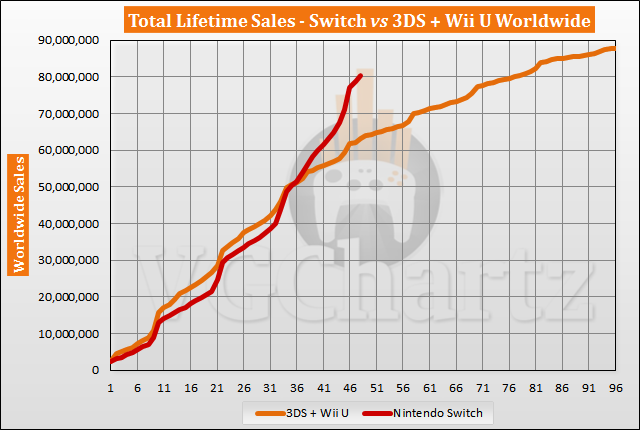 All things being equal, I think the November or December comparison will be the last of these charts.

Even if the switch was gaining by 1 million per month, it would still take the holidays to push it over the edge.

That said, I can't see it being any later than December for the switch to overtake the gen 8 consoles.

Switch has a good chance to hit 100 million this year. So it'll probably pass 3DS+WiiU in October.

Oh I definitely see the switch hitting 100 million this year. I just don't know how much will be holiday sales vs Jan-Oct. I'm guessing 25 million at minimum for the calendar year.

The "gap change in latest month" is comparing Switch month 48 to month 48 for the WiiU/3DS combined... this is not the same as the amount the Switch is catching up to the lifetime total. WiiU/3DS are no longer selling (well 3DS is basically nothing) so whatever Switch sells in a month is how much it catches up to total WiiU/3DS.

In other words the Switch only has average 1.5 million per month to pass the WiiU/3DS combo in the first week of September. So my guess is it will happen in August, slight chance in July if it gets some good boosts.

July would be impressive. I'm still sticking to the holidays. But I could see it happening as early as August or September.

It all depends on how the summer turns out. I'm assuming a drop in summer for all the consoles once most people have a vaccine. But maybe not. We'll see.

Can you clarify what months you mean by holidays then, as I would consider it to be Nov+Dec. + maybe October if you mean the holiday quarter.
Lets break it down to weekly:
Average sales per week Switch needs to catch up to WiiU/3DS by the last week in July = 414,000
by last week in August = 350,000
by last week in September = 304,000

This doesnt take into account any adjustments (though adjjustments could be up OR down) and ignores the 3DS still selling (but as it's less than 2000 per week its negligible)
Frankly I was being conservative by saying "slight" chance in July.

July is a conservative guess by saying slight? Either way July is bold.

Holidays. November and December for this year. Starts around Thanksgiving. Ends around Christmas. Also January in some parts of the world but that's irrelevant for the sales this year.

I could be wrong. I don't expect the switch to fall off a cliff as some might say. But so far it's a pretty weak year going into the summer. Mario golf(which I'm actually excited about) and skyward sword (once was enough).

But ok, Assuming your calculations are correct, then I would still say early September.

Maybe I'm overly optimistic about things somewhat going back to normal this year. But, traditionally, games and consoles were weak in the summer. And with people buying switches like crazy last year and possibly wanting to go on vacation this year, yeah, I could see some sub 300k weeks.

I don't know what the switch currently is selling on average for the year. So a few below average weeks might not affect things much. I don't know.

But it seems to my July won't happen. August is unlikely. September is possible and even likely. Which is what I said previously.

I hadn't crunched the numbers. So when I said holidays, I meant we would be waiting until the end of November to see the monthly chart. It was just a rough estimate.

No problem
My initial reply was because I thought you were taking the "gap change in latest month" figure of 742k to determine how much the Switch is catching the WiiU/3DS per month.

My guess would be 1st or 2nd week in August, but early September is definitely feasable if it slows down, this would be in line with the minimum 25 million yearly sales you mentioned earlier which is a reasonable estimate.