The throwback ninja action game Cyber Shadow comes courtesy of developer Aarne "MekaSkull" Hunziker and publisher Yacht Club Games — and it's hard to imagine a more ideal match. Hunziker, the one-man team behind studio Mechanical Head Studios, dreamed up the idea for Cyber Shadow, a 2D NES-style game that borrows heavily from Ninja Gaiden and Contra, while Yacht Club leaned on its 8-bit experience with the Shovel Knight franchise to steer Hunziker's development and add an extra layer of polish. The result is pretty much what you'd expect: a nostalgic action-platformer with tight controls, authentic NES-era presentation, a rocking chiptune soundtrack, and a potent mix of old-school challenge and new-school accessibility.

Cyber Shadow follows the cyborg ninja Shadow, apparently the last remaining member of his clan. Awakened by a helpful drone in the ruins of Mekacity, Shadow fights back against a legion of synthetic lifeforms that appear to be harvesting humans for their life essence. 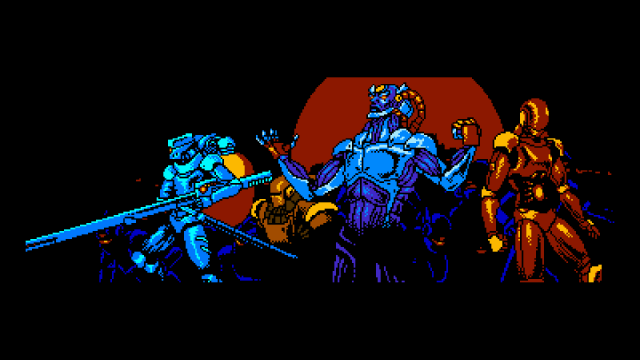 This is a fine, effective premise for a retro action game, but Mechanical Head takes the idea further. Through flashbacks — presented via in-engine cinematics and Ninja Gaiden-esque animated cut-scenes — we learn more about life in the city before its fall. Thanks to left-behind computer logs and Shadow's preternatural ability to read the imprinted thoughts of deceased ninjas and civilians, we discover more about the unnatural deeds and human selfishness that precipitated disaster. Finally, after several trips into the Ethos, a parallel plane of existence, we begin to wrap our heads around the religious ideology of the clan, and the continuum between life and death that underpins it. In these ways, Cyber Shadow goes beyond what is typically expected from the genre.

Similarly, the game exceeds expectations on the gameplay front, thanks to its commitment to Yacht Club Game's design philosophy: "the trials of NES games without the tribulations". While the game leans into unforgiving platforming and combat situations from classics like Super Mario Bros., Mega Man, Contra, and Castlevania, it provides enough modern quality-of-life features to keep things from feeling truly hopeless. That includes plenty of checkpoints, the ability to spend accumulated currency for perks at said checkpoints, and several health and energy upgrades spirited away throughout the game. 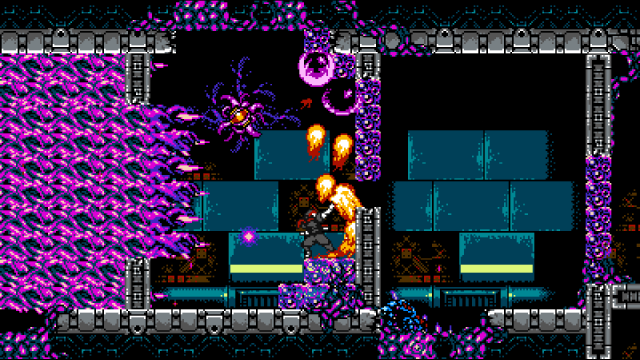 All that said, Cyber Shadow does stumble slightly with a few difficulty spikes and a handful of arduous platforming segments where checkpoints are few and far between. Still, there's nothing here that makes you want to punch your fist through a wall.

Cyber Shadow is an action-platformer, so you can expect lots of death-defying jumping, deadly combat with rank-and-file enemies, and climactic boss battles. Everything works extremely well, due in part to the game's razor-sharp, responsive controls and in part to the steady way it bestows Ninjutsu skills. At regular intervals Shadow will earn new abilities: shuriken, a vertical fire attack, parry, wall slide, etc. Each of these mixes up the rhythm of the action and opens up new types of trials. 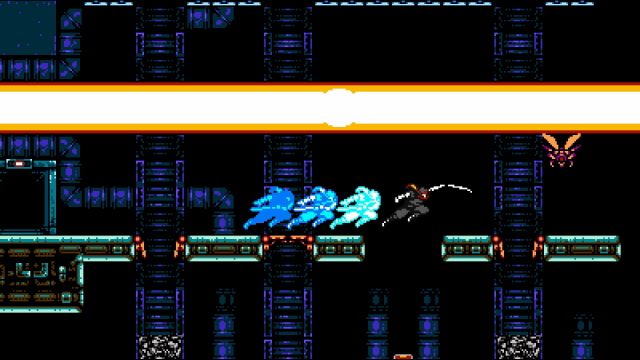 The game really explodes open, however, with the addition of double jump and dash. Not only does this open up new pathways in older levels — providing backtracking and exploration opportunities that grant the game greater depth — but it bestows upon Shadow mastery of the air. Towards the end of the game you'll be flying through empty space, bouncing on top of airborne enemies, deflecting bullets, and slashing robotic bad guys to shreds. Cyber Shadow does an excellent job of making you feel like you're getting stronger, and devising clever level designs and gauntlets to match your new skill level.

You'll need every skill in your repertoire to take down the game's 12+ bosses, which come in many shapes and sizes. There are fast-moving bipedal synthetics, hulking mechs, and even an aquatic robot dragon. All boss battles are distinct and memorable, and for the most part tough but fair. The one exception to that rule is the game's final showdown. It's a multi-phase fight where you need to topple three bosses in a row without taking a breath. Worse, the final phase adds some previously-unseen mechanics that will take a little time to decode. 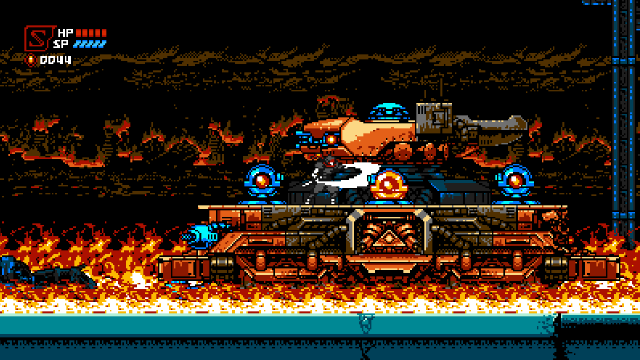 Cyber Shadow will take you approximately eight hours to beat, but add a few more on top if you're going for 100% completion. In addition to searching for hidden health and energy upgrades, you can extend your playing time by tackling 40 different feats, for example "parry 50 times".

It's great news for gamers that Mechanical Head Studios and Yacht Club Games connected for Cyber Shadow. Together they've crafted an outstanding action-platformer that's inspired by the classics but not beholden to them. It handles splendidly, looks and sounds great, and provides hours of dangerous, high-stakes gameplay.

This review is based on a digital copy of Cyber Shadow for the NS, provided by the publisher.

Sounds like a winner! I was hoping it would turn out good!

Caught my eyes immediately. Thanks for the review, since I had not heard about it and I'll follow it with great interest.

Surprised I haven't seen this covered by more publications given the slow month and reputation of the developer.