Depending on what day you ask, it's been forever or yesterday since I evaluated Gears 5.  Even during a pandemic and previous studio head Rod Ferguson leaving, The Coalition has been hard at work adding content and fixing issues throughout 2020.  For someone who's casually played during each major update, the differences are clear as day to me.  Fixing annoying launch issues and next-gen visual upgrades aren't the only aspects that've received some love.  What began as modest side content, Escape Mode's trio of protagonists have received an origin story via a new expansion campaign: Hivebusters.  How does it measure up?

The territory will seem familiar if you've played the cooperative mode.  Keegan, Lahni, and Mac – the three selectable heroes of Escape – have been handpicked for a secretive Hivebusters program.  This ragtag crew, known as ‘Scorpio Squad,’ must infiltrate a Swarm hive and detonate a chemical weapon at its heart.  It's practically a suicide mission judging by the odds, but it could be the key to saving Sera.  In essence, this is a prequel story to the recycled set-up you can expect in Escape.  Not an expansion of curated maps with reused audio barks from the crew; a beginning-to-end narrative. 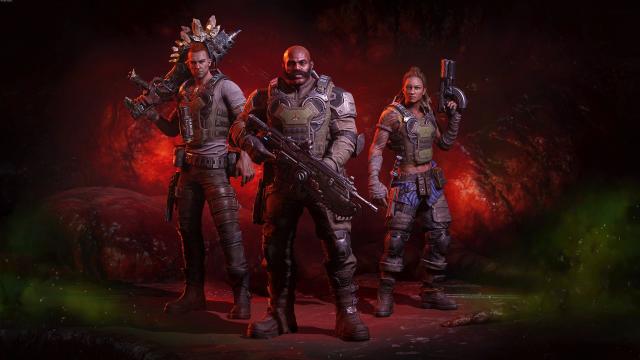 Now the predesignated personalities of leader, solemn warrior, and Scottish loudmouth are given backstories and emotional context for their insane missions.  As someone who's enjoyed Gears' lore and stories to… various extents, I came away appreciating these side characters getting more limelight; however, it's a shame these archetypes don't rise to the main campaign.  Perhaps I'm being too biased but I think Mac ranks as my least-liked smarmy teammate yet.  To the expansion's credit, a nice addition is how the hallucinatory aromas of their toxin bomb's compound base give them flashbacks of their worst memories.  This means unsettling memories come rushing back for whichever character you control during some cinematic moments – a nice method of rekindling horror elements previously absent from the series.

One aspect I'm torn on is the script's relatively short length.  Bear with me.  It's nice to have the size of a Marvel movie script – with similar setups and payoffs nestled in the dialogue; that said, part of me feels like something is missing too.  The central plot device Scorpio is striving for is a sensible reward.  The problem is treating that acquisition as both the lead-up and climax doesn’t feel like the proper end.   Perhaps my judgment is clouded by the lackluster final boss too.

In sum, the story hits the mark for what you'd expect.  If you were never a fan of any Gears in this respect?  Don't prepare to be won over here.  For those wanting to get lost in this world again?  Scorpio Squad's dynamics – with fair acting performances – and breathless pacing do just enough to bump it past c-tier filler, but you can also spot the potential for something more. 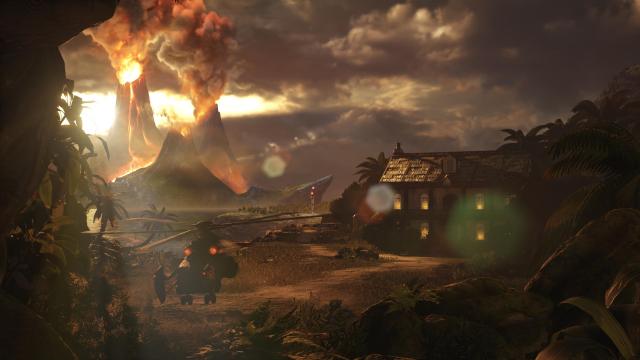 In keeping with its foundation, Hivebusters maintains character ability traits found in Escape within the framework of a linear campaign.  Characters aside, the rest of the story stays the same: walk through safe area, engage in upcoming shooting gallery, wait for the gong to indicate you're clear, and repeat.  There is the occasional stealth opportunity, but without Jack's Cloak (from the main campaign) this is treated more as a chance to pick off one grub and get to real fighting.  The variety of weapons is virtually identical to Gears 5's campaign, and so too are the enemy variants.

This typical structure along with the crunchy violence can still feel cathartic, but the familiarity comes at a cost.  It's like the inverse problem of Gears 5: 3-player co-op is more evenly enjoyed but the nuanced character from playing solo is now lost.  Jack as an upgradeable partner added a lot to 5's action vocabulary; plus, The Coalition dipping its toes into open-world design felt adventurous.  Having a back-to-basics approach a la Gears of War 4 feels more constrained after the exciting first half wears off.  Outside of a couple of split paths that present special vantage points there's not much experimentation.

Keeping with the launch frustrations I'd aired about the original game, this expansion has similar blemishes that interrupt gameplay too.  I had one hard crash during an otherwise mundane scene and had to worry about a corrupted save file; fortunately, the latter resolved itself after restarting the console.  Also, it seemed like several fights had a couple of dimwitted Swarm drones for easy kills.  As if two of them colliding near the same cover spot resulted in them nonchalantly standing up and doing nothing.  Given how often I carried a sniper, the free headshot always woke the other one up and resumed fighting.  Although never as flagrant as my time with Gears 5's launch, these distracting issues suggest another round of final polishing could've gone a long way.

Although functional and viscerally satisfying, Hivebusters' shooting foundation doesn't congeal with its Escape Mode roots.  There: Keegan's ammo replenishment and Lahni's electro-knife (which I guess is canon now?) were compliments for Escape's race against the clock.  The benefits and drawbacks are more pronounced.  Putting Keegan's ability in a standard campaign takes away the staple of juggling varied armaments thanks to his generous cooldown timer.  Because of this: it neither fully satiates the tried-and-true bloodlust from older titles nor honors the adventurous side of the latest entry.

The singular thing that holds true for this series is no exception here: the visuals are downright impressive.  Since all of my experience is based on an Xbox Series X, I can't speak for any technical mishaps potentially found on 8th-gen hardware.  For me?  There was nary a moment of dropped framerates – even during its most hectic scenes.  The Galangi Islands are not simply sold by The Coalition's prowess with Unreal Engine 4 but also the well-realized layout to the volcanic backdrops.  It takes a couple of notes from Uncharted with respect to logically partitioning the distance from your goal, so as to make each area feel like scenes instead of levels. 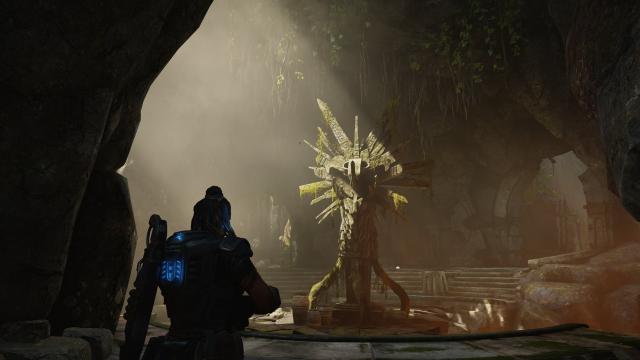 Leaving aside any nerdy deep-dives that go beyond my understanding of computer graphics, Hivebusters' art design is something else I admired.  Speaking as one of those weirdos who's read several Gears novels, it's pleasant to further explore tropical hideouts that have been articulated before.  It's a shame the amount of new enemies only amounts to one, but shooting galleries inside mega-volcanos and Polynesian-esque villages are still exciting in their own right.

Sound design and soundtrack amount to what's expected for this series.  Perhaps the 'crunchy' headshots and body obliterations can sound too comical compared to the old Locust days, but it satisfies the lizard part of my brain.  Maybe I’m one of those who’ll never tire of hearing these enemies transform into mulch with this gratuitous arsenal.  The soundtrack seems to be plucking some of Ramin Djawadi's best picks from the main game along with extra rock ballads.  Nothing particularly surprises within this department, but it gets the job done all the same.

Value is one of the most perplexing qualities about Hivebusters.  Barely getting 3 hours out of a price-busting $20 expansion could incite a harsher outlook with you too.  I don't disregard the added benefits of 3-player co-op (offline or online) and other considerations, like collectibles and various difficulties, but I'm not hankering to rush back in as I was when the main game's credits rolled.  Obviously the benefits of Game Pass Ultimate made this an easy download, but considering the price with the latter half's dip in quality makes my judgment more conflicted.  It’s funny to think of shorter indie games that’ve felt more content-complete by comparison. 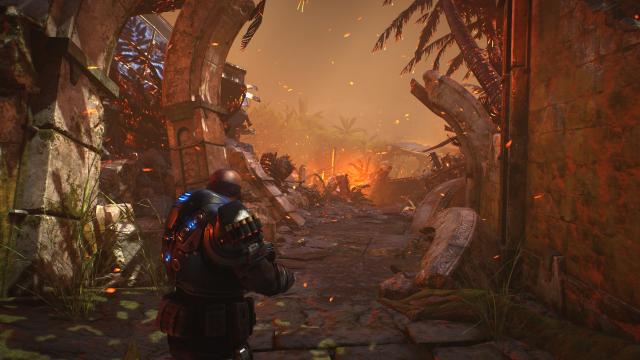 After multiple DLCs focused on weapon balancing and new maps, The Coalition's first stab at a full-blown expansion is an odd duck I somewhat respect.  Embedding more character into Escape Mode characters provides greater incentive in appreciating their tasks – not just because the game tells you.  But when considering its ephemeral length and the connected comic series releasing alongside, I can't quite shake how... going-through-the-motions it feels by the end.  Latching on Escape's character class structure with a regular campaign being a primary example.  All of this leads to it being an easy sell for fans, but not reaching the heights of other venerated expansions from 2020.

This review is based on a digital copy of Gears 5: Hivebusters for the XS

I didn't know this was coming but enjoyed the hell out of it for around 3 hours. It was included with Gamepass so it's a 9 for me. Would probably even pay a small amount to buy it if I had to.

I played this on PC via Gamepass Ultimate, which is my first time back with Gears 5 since launch. The graphics were stellar once I got it working but I did get this weird thing with chequered blue boxes appearing over character models in all cutscences.
I found the pacing in the first half of the game to be broken. You’re treated to a tutorial which is downright unnecessary for an expansion pack. The characters were also really one-dimensional earlier. I couldn’t understand for the life of me why Mac kept whinging about impossible odds when I was breezing through the Swarm with only minor problems.

I think you can make a fair assumption that in an expansion pack, nearly all of the players playing it will have played the base game first - hence a tutorial is rather redundant.

My complaint about Mac is not so much is whining contrasted against the other squad mates, but against the narrative and level design. Playing through it, I was not having much difficulty advancing through the Swarm, so to have Mac constantly saying how impossible the situation seemed just felt bizarre. Maybe if it was structured so the base had been damaged and the path barred, forcing you to take a detour and not knowing where it would lead, if you started off with 2 other squadmates who got killed or if you finally come up against an encampment with multiple heavy enemies that you can’t get past.
But none of this happened, so I’m just left wondering what Mac is complaining about.

Maybe. Do you remember the optional tutorial in Gears 2? That would have been a better fit for me.