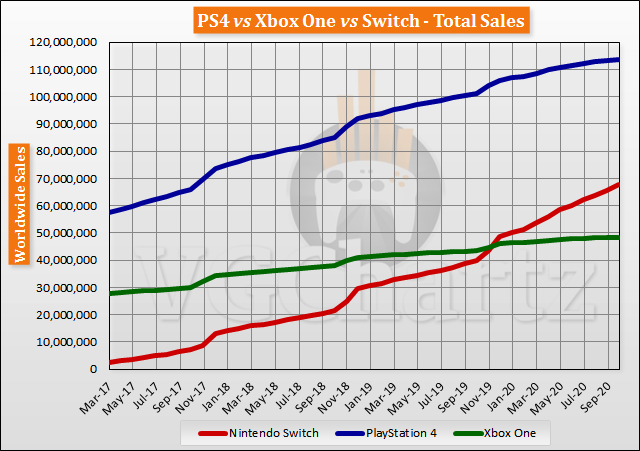 Looking at the total sales of the PlayStation 4, Xbox One, and Switch through October 2020 shows the PS4 is currently ahead of the Switch by 46.02 million units and ahead of the Xbox One by 65.31 million units. The Switch has consistently outsold the PS4 to close the gap since the middle of 2019. 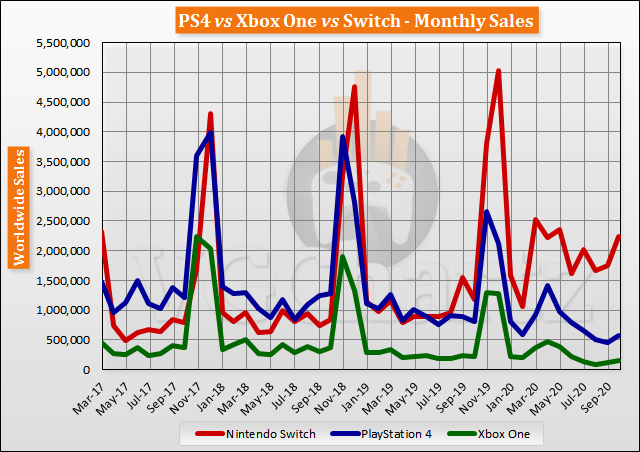 Looking at the marketshare, the Switch managed to achieve 75.5 percent of the monthly sales. The PlayStation 4 accounted for 19.2 percent of the consoles sold, and the Xbox One 5.3 percent.

The Switch was sold 68.3 million times as of September 30th 2020. That means it most definitely hasn't sold 67 million units as of the end of October 2020 one month later. That are wrong numbers.

Is the gap that big though?

@Kakadu18: Shipping takes a while, up to 2 months depending on where it goes. All those consoles are already sold for Nintendo, but haven't arrived at their clients stores yet. Add to this all the consoles that need to be on the shelves inside the stores (or in depots in case of online retailers), and you get a couple weeks worth of unsold stocks together that make the difference between shipped and sold.

And like Trunkswd explained, since there are so many sales during the holidays, orders are huge during that season and thus the gap between shipped and sold is even larger during the approach to holiday season.

And considering how much the Switch is selling right now and what's expected for the holidays, 2-3M could possibly not even be enough right now, meaning the Switch is more likely overtracked a bit rather than undertracked.