Updating an older formula from a series that’s been on hiatus for a long time and bringing it into the present is always a difficult task. Attempting to both keep the spirit of the original titles present while updating it to modern sensibilities tends is a tricky balancing act that goes wrong at least as often as it does right. With that in mind, here’s Crash Bandicoot 4: It’s About Time, developed by Toys for Bob, perhaps best known for the remastered Crash N. Sane Trilogy and trying to bankrupt every parent with a child under the age of 7 with its previous Skylanders games. So which side does this new offering fall into; a solid series update or a failed attempt at capturing the spirit of classics? 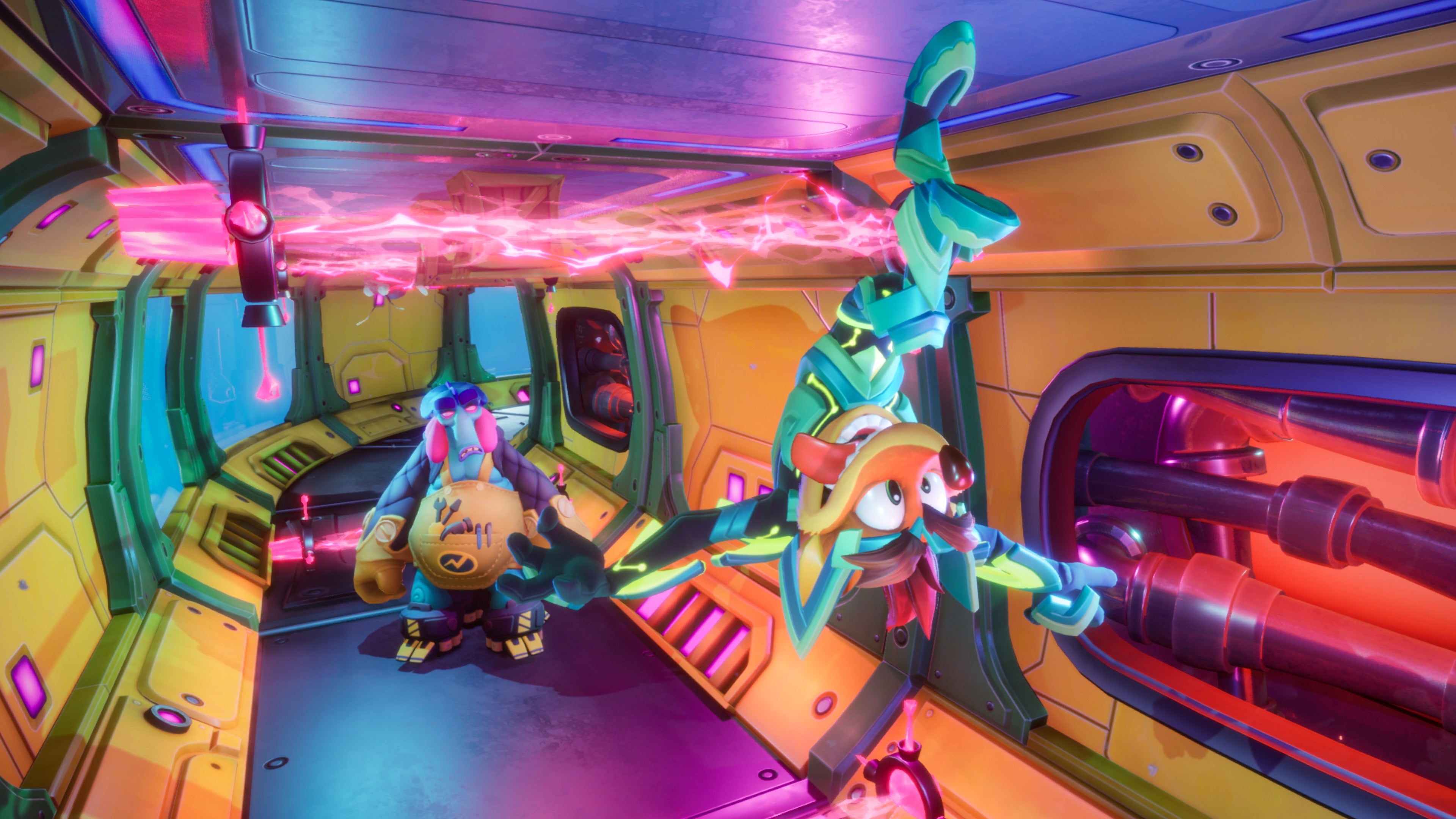 The backdrop setting for Crash 4 is something of a mess, but it’s a fun mess, and it helps compliment the game nicely. A various entourage of past Crash baddies have gotten together and are planning on taking over the universe by manipulating space and time itself. Crash and his sister, Coco, must progress through a series of stages and dimensions while hunting down various masks that can undo the destruction caused by the evil Dr. N. Tropy, which feels like a rather fitting villain name for a game releasing in 2020.

If you’re just looking to beat the game, I’d say Crash 4 is probably a bit easier than older titles. Levels are scattered with copious checkpoints and the platforming overall feels much more generous, with far fewer high-precision jumps than previous titles. I’m normally not a fan of games dialling back difficulty from past installments, but I think it works for the best here as these are almost all concessions designed to cut down on some of the more tedious and seemingly unfair parts of older titles. The option to play with or without a limited number of lives is a solid addition as well. Personally, struggling to overcome a well designed challenge is a lot more enjoyable when there isn’t a ticking clock in the background counting down the number of failures until I have to restart the level, but it’s good that this option is left in for players who want it. 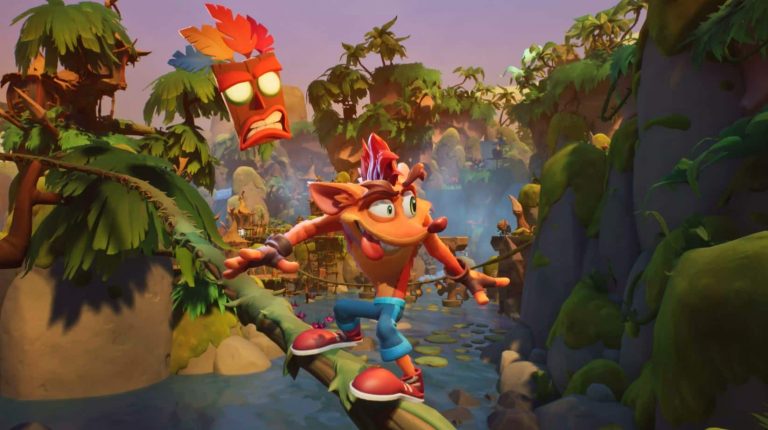 Like its predecessors, Crash 4 places a heavy emphasis on completing levels while collecting various items, often boxes or gems. Many of these are in hard-to-reach spots and require thorough knowledge of the game’s mechanics, which lends Crash 4 the series staple sense of replayability. Despite what felt like a drop in difficulty to me, going for 100% completion is still a notable undertaking, and the myriad of unlockable challenge levels, including paralogue stages that place you in control of a different character with a story that runs parallel to the main narrative, gives this game a wealth of content.

That said, for every cleverly placed item that forces the player to put their reactions and platforming skills to the test, it seems there’s another that just feels unfair. Examples of this are the placing boxes off screen so that you can’t see them and will only stumble onto them by luck, or putting a gem on the side of a chase sequence where the player can’t react to it without knowing where it will be on a second go-through. This isn’t a new problem for Crash, as previous entries have resorted to what feel like rather cheap tactics for hiding items, but it’s a little disappointing to see it return. 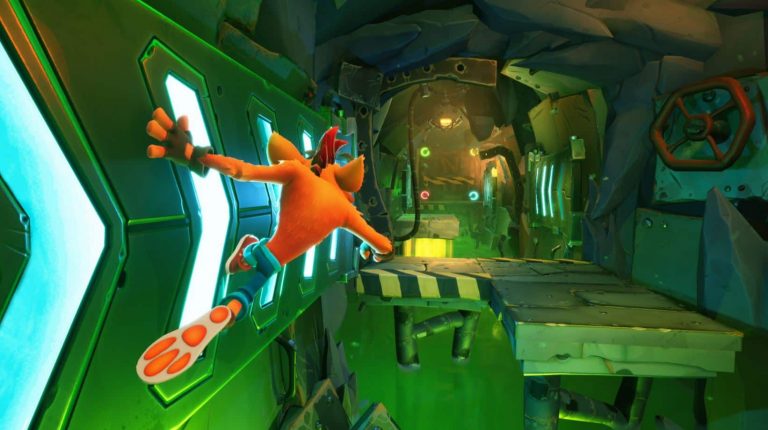 And while Toys for Bob has ironed out many of the gameplay kinks from prior installments, it would be remiss of me to not mention that Crash’s biggest long-running issue, depth perception, still occasionally becomes a problem. It’s not as big of an issue as it was in the first three titles, given the reduction in instances that require very precise jumps, but the odd chase segment or perspective shift will occasionally cause some frustration with how Crash handles.

From a design standpoint, there’s quite a bit of variety to the levels as well. Along with the standard platforming segments and the aforementioned inevitable chase sequences, Crash 4 has implemented a few new mechanics as well. Some levels now require the player to swing from ropes/vines and grind along rails in a manner not dissimilar to Retro Studios’ recent Donkey Kong Country games. Another significant aspect is the addition of masks, which switch up the gameplay for certain segments by giving the player the ability to phase certain platforms in and out of existence, flip gravity, slow down time, and swap gravity. These get used quite frequently and creatively, and their segments are some of the highlights of the game. 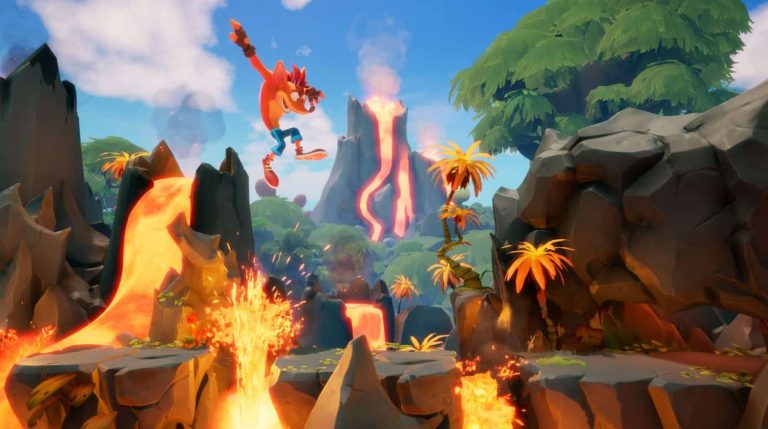 That said, perhaps the most surprising improvement Crash 4 makes is with regard to its boss fights. They’re a notable step up over bosses in previous entries (and most 3D platformers in general), which tended to just focus around repeatedly dodging attacks in a small environment until the boss became vulnerable. There’s still an element of that present, but Crash 4 often mixes in platforming as well, which forces the player to keep track of both the enemy and where they’re jumping. It does a much better job of feeling like a test of how well the player has mastered the game’s core mechanics, and these types of fights are ones I’d like to see more 3D platformers aspire to include.

Aesthetically, Crash 4 is quite pleasing to look at, particularly in the realm of animations. There’s a great deal of character given to Crash and Coco by how they jump and navigate the various areas. And as for those environments, they’re nicely varied and enjoyable to look at, with some particularly unique artistic flair in a couple of cases. I don’t think it quite holds up to the very best the genre has to offer, but Crash 4’s areas are largely unique and engaging from an aesthetic standpoint nevertheless. The music is fairly standard Crash fare, and serves its purpose, although I do wish a bit more effort had gone into making the tracks stand out. 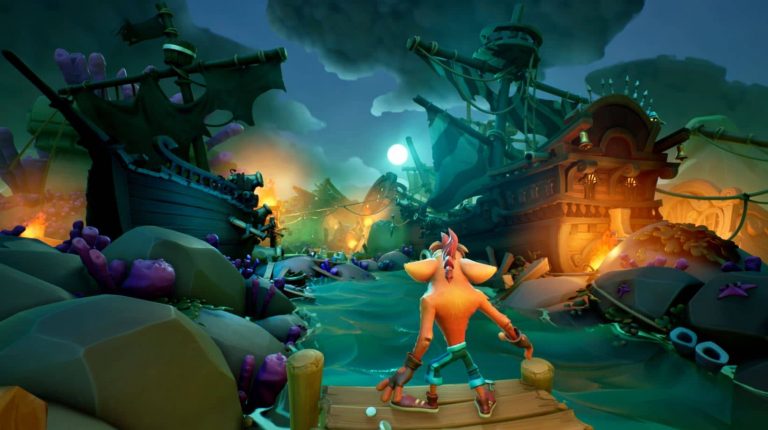 Crash Bandicoot 4: It's About Time isn't perfect, but I do think it represents an excellent return to form for a series that has been largely bereft of original content for the past two decades, and in some ways constitutes a significant step forward for the genre that other platformers should take note of. Toys for Bob has done a commendable job in taking an older formula and smoothing out many of the wrinkles while simultaneously building on it to make it better. If you’re a fan of 3D platforming, you owe it to yourself to check this game out, and even if you aren’t, you’re likely to find an engaging enough experience here to make it worth your while.

This review is based on a retail copy of Crash Bandicoot 4: It's About Time for the XOne

On a serious note: this review did help tip the scales in me going all-out and purchasing it right away.

Even a broken games industry is right twice a day =p

I'd be very curious to know what you think when you get around to playing it.