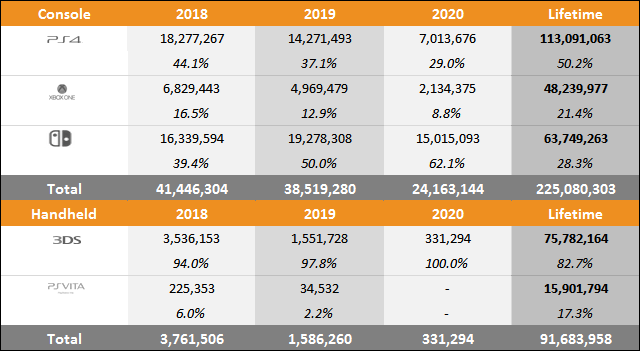 Switch reached 15 millions this year ! PS4's 50% market share is about to go.

Nintendo selling extremely well. Sony will take global sales back from Nintendo come November and onward. But Sony does that every generation though :/

Umm what??
Sony has no chance of taking back global sales from November onward. Switch is far hotter right now than any Sony system has ever been. Switch will probably have the second most sales ever by a system in a year this year, behind only the DS's best year. Also systems generally take a couple years to have their sales heat up. PS5 won't be beating the Switch in yearly sales until probably 2023 when Switch is getting very late in its life.

It didn't with the PS3. And I'm not sure at all the the PS5 would outsell the Switch in the end.

@Slwowenberg Have you seen the news my friend? CNN, Forbes, YouTube, all rate the Sony PS5 as highly anticipated. Nintendo Switch is hot yes but the PS5 is brewing up something else. Like Sony projects to sell 10 million by Febuary of next year that is insane to me. And Nintendo is selling extremely well too. And Sony will outsell Nintendo on a year to year basis come November. I don't feel good saying it as Nintendo I love them they've always been a underdog to me but that's ehat I think will happen. Sony are even limiting PS5 pre-orders to one per person. I didn't think I'd be this age and see something like that.

@Bofferbrauer2 Yes friend. I remember the Wii outselling the PS3 crazy times lol. Glad Nintnedo is different from what it was 10 years ago. But Sony is different now too. Sony messed up with the PS3 and Nintendo was able to outsell it :D However PS4 broke records for Sony and PS5 as news outlets combine alike write it will as well. Been gaming since the 80's and Nintendo always domianted until Sony came in. No one touches Nintendo in handheld but Sony simce the 90's has taken the home console crown, well when Sony doesn't mess up lol. Excited for PS5 and Switch. It'll be intense these coming years :D

Maybe November depending when it launches. But i doubt the PS5 will sell over 20 million units in it's first year i i would be surprised if Switch would drop below that next year.

@xMetroid I highly expect that to happen though friend. Which is insane to me. Sony wants production units of 10 million by the end of this year alone and expect sell well over 10 million by Febuary of next year. Nintendo Switch is selling extremely well each month too its not letting up :O. I just notice from the news outlets I follow there's extreme Sony anticipation. PS5 doing 20 million in a year isn't out the question I think. Especially since analyst predict it to outpace the PS2 :O. Oh man if Nintendo releases their 4k Switch I hear about ... Guns blazing everywhere. Sony and Nintendo heating up really benefits us gamers :D

If Sony produces 10M until the end of the year, then it would be impossible to sell much more than that by February. Those consoles would need to get shipped out first, which can take months until they arrive at their final destination.

PS5 will have a big start, no doubt about that. However, I'm not sure how much momentum it will have. For that to evaluate, we'd need a pricetag first.

@Bofferbrauner2 Yes friend. If Sony can meet the supply and demand with this PS5 they can do well more than 10 million by Febuary. Jim Ryan stated they're goin with 10 million due to the increasing anticipation for their PS5. I believe Microsoft has indirectly confirmed price tags for their Series S and Series X, so now Sony will likely announce a price tag very soon as they will feel more comfortable now :D rumors I saw were $400 for the digital PS5 and $450 for the disc version. Im thinking Sony will go $500 for the disc version but that's just me lol. 4k Switch, PS5, and Series X dropping ... Such good times. These sales charts of Sony PS5 and Nintendo Switch will be interesting to see :D

plus its highly likely that the ps5 would be dead in the water in japan, especially with them focusing less and less on the games japanese people actually want. the 3ds was outselling the ps4 a couple weeks ago. currently switch:ps4 in japan is something like 30:1 in sales.
home consoles were kind of dead in the water in japan, the only reason the ps4 did almost as well as the ps3 is becasue it had weak competition- it took the ps4 3 years to beat the vita there.
less japan support means less compelling reasons to pick it up VS xbox.

@TheBraveGallade Yes friend. Japan has always been a fascinating one to me. Nintendo really kicks Sony's butt in this territory. The Switch outsold the Vita and PS4 in Japan. Also with Japanese gamers preferring handheld and mobile gaming Sony stood no chance against Nintendo. At the same token, outside of Japan, Sony's PlayStation brand is much stronger than Nintendo's. Sony outsells Nintendo in Europe, North America, and the other major territories outside of Japan. That's why this is all intriguing to me. Sony PS5 slighty maybeee will outsell the Nintendo Switch for a month or two in Japan than Nintendo Switch will outsell it going forth. But on a worldwide scale outside of Japan, Sony will outsell Nintendo. PS4 did that to the Wii U, Wii did that to PS3, PS2 did that to Gamecube, and PS1 did that Nintendo 64. History tends to repeat itself and if Sony starts off the 9th gen correct and doesn't mess up ... Sony PS5 could win it all. However I wouldn't count Nintendo out, they're heavy underdogs :D!