If there's one key point to emphasize about Invader Studios it's this: their adulation for the Resident Evil series and classic survival-horror can't be denied; in fact, this freshman Italian developer literally made its start by announcing an unauthorized fan remake of Resident Evil 2.  Despite Capcom announcing their official one shortly thereafter, Invader had the skeleton of a game already.  With an original story and their own IP, Daymare: 1998, they were prepared to craft a true love letter.  While I still appreciate the displayed enthusiasm for the genre, it's nigh impossible to ignore the foul stench emanating from this rotting carcass.

The dead walk!  As the name implies, the year is 1998.  An emergency broadcast erupts from a Hexacore facility in Washington State, warning of workers turning into flesh-eating monsters after an incidental gas leak.  You start the game as Liev, "H.A.D.E.S." security agent (Hexacore Advanced Division for Extraction and Search).  As the game progresses, the protagonist count makes for a trio: another H.A.D.E.S agent named Raven, and Samuel, a simple park ranger experiencing the traumatic aftermath of this apocalypse. 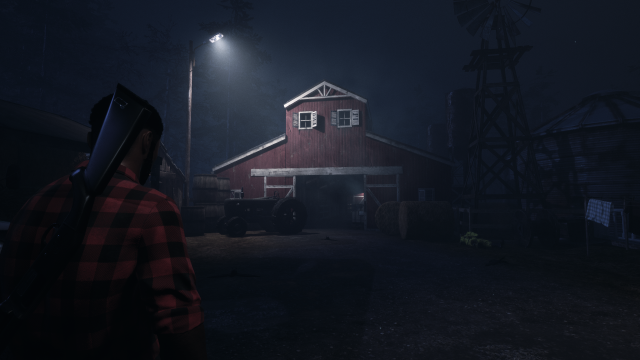 In honoring the campier roots of the original Resident Evil games, with respect to writing and goofy line delivery, I was never able to find solid footing on what Daymare wanted to accomplish.  It's leaning so hard around the "Jill sandwich" & "master of unlocking" flavors of localization errors that it essentially circles back in on itself.  The character dynamics are so hackneyed and flavorless that the sole connection to make is laughing at how intense or cool these characters believe they are.

This kind of stupidity extends to story structure too.  Each chapter has the equivalent of a foreword: an older man is off-camera near a chessboard talking about how the fallout across this lab and the town of Keen Sight is “all part of the plan.”  Whatever nefarious plot he may have hatched from all this doesn't really matter since viewers have no context for who he is—until the credits stop rolling.  The story has a weird obsession with laying out the groundwork for a franchise, a la Marvel post-credit sequences, before making a compelling plot.  Critical matters like side character motivations are relegated to this interactive post-credits scene.  This jumbled structure cheapens any twist to the point of uselessness, like several of David Cage's best examples.

The rare example of adequate storytelling can be found in the clear stakes.  Since Samuel suffers from "Daymare Syndrome," he periodically has to fight off hallucinations.  Occasionally, battles between real & illusory zombies are melded together.  This feels visceral and houses most of Daymare's solid scares.  How the simple stakes of a post-pandemic outbreak bend too far is the contrivances propelling the narrative.  Samuel's disregarded pill container, Agent's Liev's obtuse gloating before it gets the better of him, and Raven's incredible survivability strain suspension of disbelief, even by B-movie standards.  It's less about character mistakes happening versus apparent telegraphing sapping any tension. 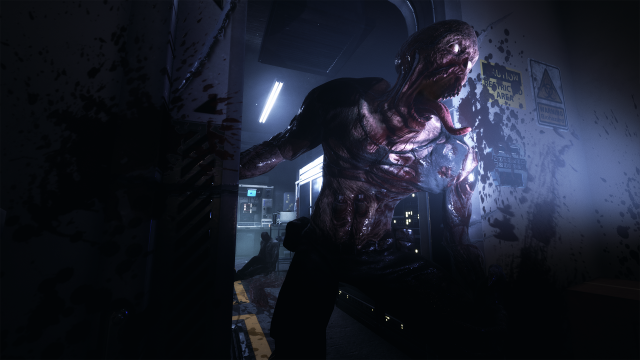 There's also the presentational fumbles with Daymare's storytelling to consider.  I don't think the lesson to take from the original Resident Evil is to hire the first English-speaking people within your vicinity to do hours of voice acting.  It's been a long time since I've heard this many mispronunciations in such a game.  Beyond that, basic inflections and tones whenever people are chatting feel stilted.  Although some voice actors have—surprisingly—modest rap sheets, others like Robert Streiner (Sandman) only have this game in their portfolio.  Even basics like inconsistent voice recording suggest a shoddy setup.

Having the overused zombie template puts Daymare on lower ground in today’s age, but anyone can still succeed by utilizing sound storytelling fundamentals.  Even campy ones can capture a mood that keeps you invested.  But when considering this third-rate dialogue, uneven structure, dumb plot, and bad performances, you can’t skip fast enough.

Outside of voice acting, lackluster presentation is part and parcel for the game.  Out of all the indie/mid-tier titles using Unreal Engine 4, Daymare may be one of the worst current examples.  This may also work as a complement to UE4's consistency: even with a small team biting way more than they can chew, certain qualities like lighting can still be appreciated.  Other aspects like character models vary from generic to horrifying in their own right.  At first glance, I thought Sandman was filling a diversity quota by showing someone with Down syndrome could pilot a helicopter; over time, however, he was simply the beginning of odd face models stuck with lip-syncing as awkward as Resident Evil 2’s 500% facial animations. 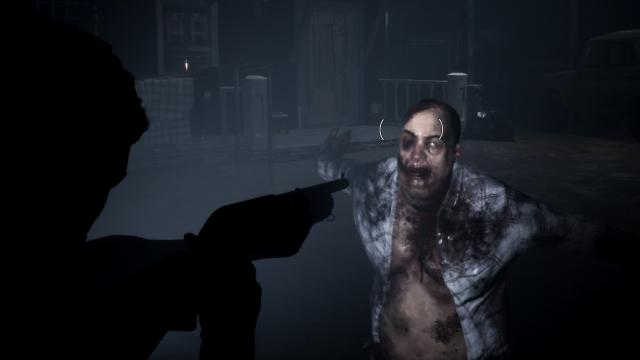 If speaking more to artistic aspirations, there's more success to note.  Samuel's red-tinged paranoia scenes feel inspired and specific areas get more polish whenever Invader are adorning their inspirations.  A smattering of 90s-era graffiti and frescoes also makes Keen Sight seem livelier.  The misfires come back to mediocre zombie variation, with several standard types being carbon copies.  Outside of the "normal undead" army, strong enemies are routine besides one: an acid-spewing chicken nugget creature.  Something about his tortured face up close gets to me.

Sound is another inconsistent quality.  The best positive would be Alessandro Galdieri's soundtrack.  Whether in respect to its era-tributes or varied instrumentation, I can say certain tracks were the sole reason I felt any tension in specific combat scenarios.  While I can't press this as ranking among the best by year's end - some of it is formulaic or tonally mismatched - it's easy to tell how much fun Galdieri was having, which in turn rubbed off on me.  When considering this is his first credited OST?  Hats off to him.  Dragging the enthusiasm down, sound design never hits an exemplary standard (indie or no); occasionally, weird audio issues can creep in like quarter-second delays in bullet impacts or when simply walking around the environment.

As stated before, Daymare arrives at a strange time for this genre.  When thinking about third-person shooting of today mixed with 90s survival-horror, it's easy to think of how this 'game dish' is so underserved; then, out of nowhere, we're served two high-budget Resident Evil 2 & 3 remakes that've satiated most fans and critics alike.  Coming back to a middle-market version ($34.99 digital) shouldn't disregard its place outright.  Yet when the gameplay template is already outclassed, I'm put in a bind about the sparse ideas I genuinely admire. 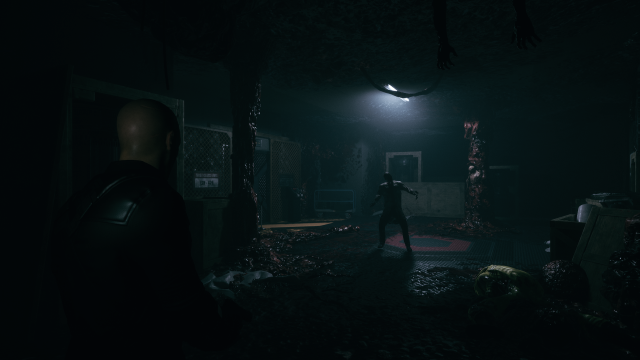 What delineates survival-horror games comes down to resource management.  The amount of items you can carry in your inventory, the number of rounds left in your last clip, and current health status all meld to elevate the otherwise-expected horror atmosphere.  The best examples have a synergy you can't find elsewhere: knowing how dire your straits are whilst still being compelled to press forward.  This restricts any kind of guns-blazing approach and makes any special ammo worth a bar of gold.

Many of Daymare's best gameplay successes stem from honoring that baseline.  The weapon assortment (different between all three characters) runs the gambit of one/two pistol variants and either a shotgun or SMG.  One of the emphasized nuances is the two disparate reloading states: methodical and quick.  The risk/reward dynamic is quite simple: slow approach takes a few agonizing seconds, while fast drops the previous clip near your feet, which can be picked up later.  There is also the complementary clunkiness to refilling ammo or taking drugs via your arm-mounted "D.I.D." device that highlight some tense moments.  Similar to The Last of Us, the outside world keeps going while you're fiddling with your inventory.

These interesting ideas are dampened by poor gameplay execution though.  Controls are clunky in a more... obtuse way than standard tank controls.  It's one thing to have natural gun sway, it's another when aiming feels more like I'm coordinating on an x/y axis grid.  "Shift two inches over right, then three up."  Stiffened positioning combined with the expressive lumbering from zombies never settled into a rhythm for me.  This is also thanks to an unreliable framerate; a constant 30 couldn't even be maintained on an Xbox One X.  There's also lacking visual communication in regards to close quarters engagements.  The windup and generous hit detection zombies enjoy is bound to enrage, especially when you know a melee hit should've registered. 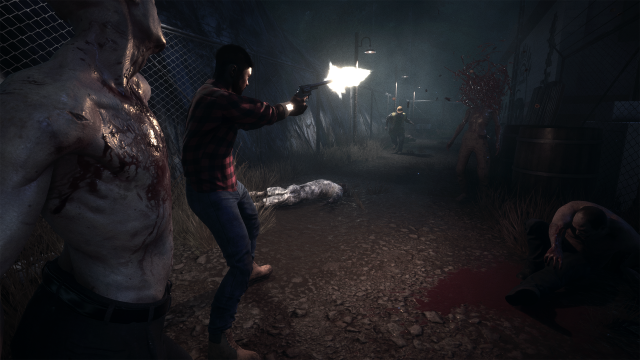 The disappointment piles on when considering the level design.  It's not a good sign when you see a classic Resident Evil love letter often disregard the interlocking levels it's known for.  Outside of the hospital in Chapter 2, the majority of forward momentum is a semi-linear path with the off-chance of a puzzle breaking up the doldrums of combat.  Some conundrums were quite rewarding too, like one utilizing Morse code.  But the problems stem from a by-the-numbers layout to go from X to Y.  Some inspired ideas like two characters' divergent paths through the same location are nifty, but so often my navigational brain was on cruise control.

There are multifarious qualities I haven't touched on yet—positive and negative.  For good, I also like the combining dynamics for special bullets and medicine mixes.  This, along with being able to store and trade items in special Hexacore lockers, fleshes out inventory mechanics.  For bad, there are numerous quality-of-life issues in regards to enemy AI.  The worst is being able to one-shot any zombie in a non-combative state, which occurs often due to so much pedestrian level design.  AI frustrations also extend to the final boss.  Every different stage with him is likely to have multiple examples of him doing nothing until you wake him back up with a few bullets.

What I have trouble considering is Daymare's value proposition.  In respect to its multiple difficulties (Easy, Normal, & Daymare) and my collectible-hunting playthrough going past twelve hours on Normal, it's easy to see a solid return-on-investment.  But the issue I have is why Invader’s small staff desired to make this overly expansive.  You’re just going through a routine so often.  Paring down the excess fat could've enabled them to focus and polish more thoroughly; instead, we're left with long stretches of unnecessary repetition and casual boredom. 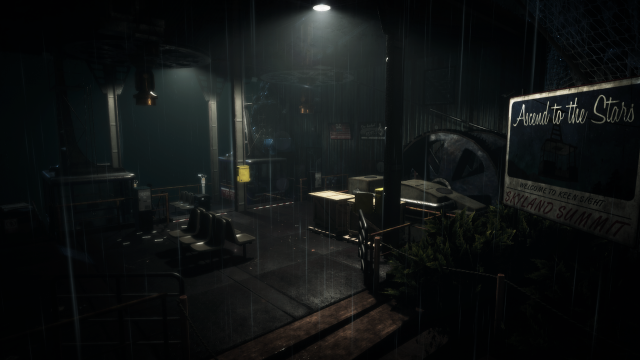 For all the pustulous boils and decrepit flesh, Invader Studios put out something I subconsciously feel they hoped honors a well-beloved series.  Wishing can only get you so far though.  Daymare: 1998 winds up being a deflating imitation of the source material.  Several crucial aspects, technical and artistic, consistently rein in my otherwise-appreciative outlook on their worthwhile concepts.  When all's said and done, it's closer in line to “Resident Feeble” than Capcom’s best.

This review is based on a digital copy of Daymare: 1998 for the XOne, provided by the publisher.