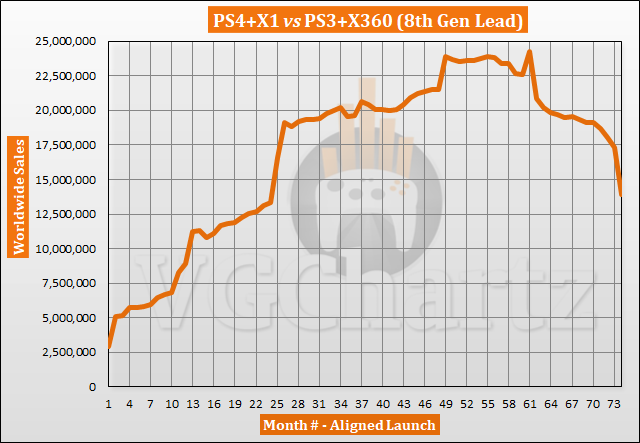 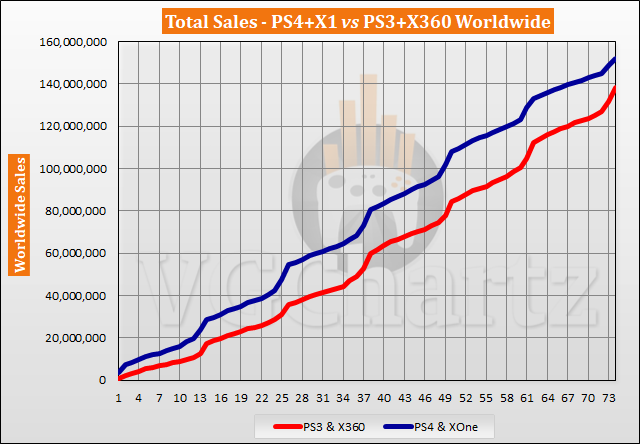 Their sales directly affect each other, we can see this by PS+XB combined selling similar amounts for 3 generations in a row.

The line is going down

I'm thinking PS4 will probably sell about 10 million this year, XBO about 2, so the gap will once again shink by about 7 million, cutting it in half.

Had Xbox One sold 60 millions this gen would win...

But then maybe PS4 would sell less if Xbox One sold 60 millions so idk. I think it shows the small decline, a lot more people started playing on PC since 2013-2014.

this is not correct, there is no official 360 sold through numbers, same for PS3. we only know that PS3 official shipments are 87.4m.

360 was at 83.6m back in March 2014, after that MS stop giving separate hardware numbers. But it easly did another 3.8m to surpass PS3, we know this because we know XBOX family numbers, and XB1+360 shipped 13.1 million from July 2014 to June 2015. then no other hardware numbers were released, but 360 got discontinued only in April 2016, this mean it had another holiday to sell.

Shipments numbers clearly have 360 as the winner.

those shipped numbers on PS3 they did sold them eventually so are the same as the sold 87.4M.
XB360 is around 85-86M even vgchartz has it. Also both of the consoles were selling until 2017, because 360 got discountinued in 2016 but there were some units left on the stores and PS3 was officially discountinued in 2017. Also everywhere in the net when you search you will find numbers for 360 around 84-85 and 86M at most but nothing more. As it is estimated by this site too. 360 did around 86M with PS3 87M. In total 173M

Problem with this is indeed VGChartz, because at this point in case it wasn't clear, VGC is not a good source, and every other source just copy VGC (like wikipedia, or sites), and also now because is common to hear that PS3 passed the 360, even many important people say that when really, there is no true source for saying that PS3 is higher than the 360.

All we know is that 360 shipments are higher, by a few million, and with higher lifetime shipments is also super likely sales in general are higher.

Okay, but there is not anything in particular you can confirm these numbers. Therefore you can't just bet one number and define it as 360 numbers as we don't have official numbers. The close we have is around 86M which is also in the wikipedia article (which is not taking info from here) and is also the preety much same number in this site and on every other article over the net too. And why would be impossible for the 360 to just sold around something like 1.2-1.3M in 2015 and another 700-800K in 2016 ? It is normal to be this low because the xbox one and ps4 were on the market for 2 years by then and 3 in 2016, and preety much everyone bought them because 360 and ps3 were still at high prices around 249 to 299official MSRP, and ps4 and xbox one were at 399$ (with temporary 349$ price in the holidays) How can you think that 360 would've say at this position ?

Also I couldn find any report for 2015 that xbox brand sold 13M, where is this ? Microsoft stopped announcing any kind of numbers after 2014 when they announced 10M sold for XB1.

You see how fast the 360 is still selling?

And after that we never knew anything about Xbox hardware
The thing is, we have pretty good estimate for XB1 hardware, and with those estimate we also have a good idea of 360 sales. And the thing of all of this is that even in the very worst scenario possible, 360 still did more than 87.4m lifetime.

No, it hasn't. I can imagine some numbers and write them down too. Where is your proof ? I can say that 360 sold 10M from 2014 onwards, and I can say that it sold only 2M. What is the difference ? Anyone can tell everything and every number that he wants. Where is the article for xbox family sales in 2014 ? You are not showing anything only writing down some numbers.

And for the numbers okay, until end of 2014 xb360 sold 1M more so 85 at the end of 2014, 2015 1M, so 86 and with 2016 possible another 500k. Again under 87.4. Without anything confirmed any number can be made up as I said. Every article and chart in the internet and every website points to around 85-86M units and you are the only one who just imagine numbers because microsoft didn't officialy told how much they sold and since they stopped sharing numbers now 360 did more than 3M in its last 2 years, because what ? theorically it can be possible ? it is yes but I can say that 10M is also possible and I can say that only 2M is also possible. how can you back up this ? with what ? with thinking?

All the numbers i talked

I can't go to your profile for some reason, comment on my wall so i'll reply there.