The reboot.  There’s no escape from such a maniacal beast across any medium, it seems.  The latest victim in its crosshairs is the Call of Duty series.  Not the original that began the series, but the one which officially reformed it into what we know today.  Since its precursor we’ve seen copycat series come and go, new genres arise, and two US presidents leave office since.  Now, developer Infinity Ward (& rolodex of Activision’s 1st-party developers) return to their cash-cow with an emphasis on realism and more grounded combat, though not completely eschewing its action expectations.  The result is a haphazardly-made FPS redressing past sins of a missing campaign and its outdated tech while inadvertently suggesting those fixes weren’t the biggest concerns.

[An old, blind man is being watched on video venting about “foreign powers invading the country.”  The camera slowly pans to several men in the back of a white van.  Most carry weapons; one dons a suicide vest.  They collectively exit the vehicle and appear to be in a city square.  Nearby civilians, mother and son the nearest, hesitate to comprehend what’s happening.  Then, pandemonium and horror strike the masses as the bomber slowly raises the detonator.  Just as the screams hit fever pitch SMASH CUT to BLACK SCREEN and TITLE.]

This is Modern Warfare in a nutshell: the constant need to remind you that “shit gets serious, man!”  I don’t begrudge looking at the theatrics of past campaigns and thinking a back-to-basics foundation could prove useful.  The premise seems more aware of current events too.  Terrorist developments in the UK and a chemical-weapons extraction op gone awry point towards one direction: the emboldened positioning of the Al-Qatala terrorist organization within the fictional Urzikstan.  The old man mentioned previously, called “The Wolf,” is Al-Qatala’s leader and he’s had it with foreign invaders, especially the Russian Army.

From a bird’s eye view, evil Russian factions is certainly more digestible today than before.  And honing focus on the Middle East, fictional country or not, does give some breathing room to touch on important ideas.  Despite the—scant—credit to give, the narrative moving everyone along feels cloying in its attempts to feel hardcore.  The overly bombastic setpieces haven’t been limited so much as they’ve been supplanted by intricately-staged emotional beats that run the gambit of torture, child murder, and war crimes.  These heinous actions that are either witnessed or sometimes perpetuated by your side, always with the glowering Captain Price telling you “we decide where the line is because we’re in the right,” rarely escape feeling like juvenile props.

Before this story critique is mischaracterized, I do believe tough subjects can be broached by developers.  But when considering just how obsessed this series has been, and continues to be, in crafting controversial headline-bait around important narrative beats they feel artificial - even corporate - by design.  That’s the key consideration: intention and staging.  You have a basic story with one easily telegraphed “twist” once you remove the supposedly gut-wrenching beats.  With those moments?  The writers lift from Zero Dark Thirty, 13 Hours, and more to cram in as much Alpha-Zulu-Tango dialogue and morally-grey material as possible in the hopes squeezing out emotion until you’re a dry sponge.  And it’s weird just how effective every actor is at their respective role in the process, but that’s like examining a measure of alcohol diluting tainted water. 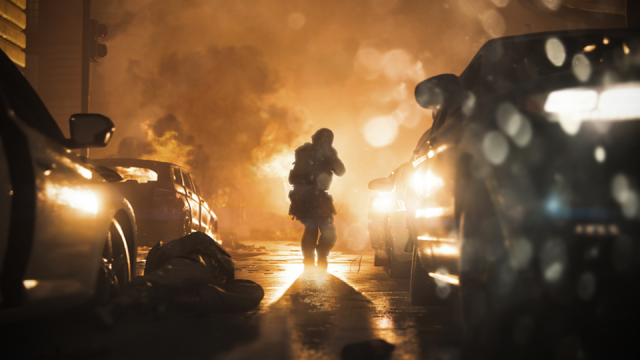 If an FPS campaign were wholly reliant on its story and tone Modern Warfare would be worse off.  For all of my criticisms of those aspects, I’d be remiss to admit I still yearned to complete it.  Perhaps part of it comes down to the quickened pacing (with an average runtime of 5.5 hours), but I think it’s more down to the additional polish and structure.

A long-time complaint has finally been answered: this isn’t running on an updated Quake engine; instead, this one’s been built in-house and maintains the same 60fps standard.  Although it’s better to leave the technical jargon about its lighting, textures, etc. to those more qualified, suffice to say there’s plenty to appreciate, especially for someone like me who’s last thoroughly-played CoD was Advanced Warfare (in all of Spacey’s fish-eyed glory).  While you shouldn’t expect the environmental destruction of the Battlefield series, greater attention has been given to weapons.  It’s more than just the improved textures but in actually seeing the difference of emptied clip signifiers for certain guns, the sensation of reloading whilst aiming down sights, and disparate bullet effects.  There’s a greater mix between its arcade nature and military simulation.  Combine this with the improved sound design making each engagement a cacophonous display of violence and you get a new technical baseline that’ll last for years.

The gameplay structure feels less muddled than in previous campaigns too.  The transition Call of Duty 4: Modern Warfare made back then to the formula is still felt today.  Before it, the protracted fights in big areas were the series’ staple.  Since CoD 4, larger combat arenas have become reliant on vehicular-based gimmicks that’ve lost their freshness since and barely have more flexibility than a QTE.  The bread-and-butter has come back to the stealthy, more condensed bits which feel akin to playing SWAT in an empty house; in fact, one of the best levels is a four-story house raid and the optional cover system locking your gun onto cover or door jambs feels like a breach-and-clear maneuver.  Aside from the great “After Dark” level, it’s a shame how often the tenser sections don’t get much breathing room before we’re off to the next Bay-Splosion fest.

As engaged as I often felt all is not perfect.  As someone who finished on Realism difficulty it’s surprising to see just how bad pathfinding can be when you’re taking the lead; conversely, it’s also annoying how characters repetitively bark orders should you stray off the beaten path for a second.  Enemy spawning is sometimes obnoxious too, leaning on one of CoD’s longest-running sins.

Overall, Modern Warfare’s campaign structure could be seen as a return to form.  But considering how liberally it plucks decade-old characters and scenarios to accomplish this?  The law of diminishing returns can't help but be felt.  The upgraded audio-visual experience goes a long way in securing Infinity Ward’s vision of bombastic combat; at the same time, disregarding that veneer reveals a well-worn template desperate to garner attention with its controversial context. 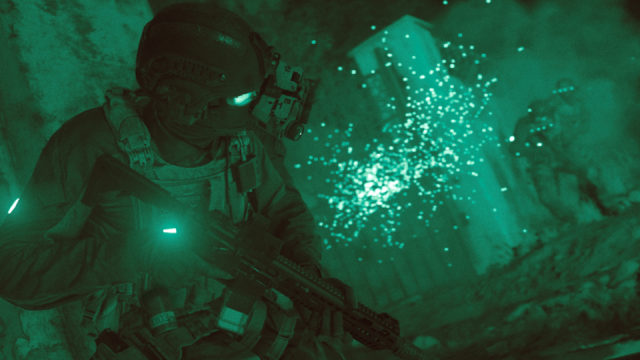 Before diving into the cooperative & competitive multiplayer components, it’s worth noting a publisher deal locks away content from Xbox One and PC players for an entire year.  Spec-Ops Survival, CoD’s version of Horde Mode introduced in Modern Warfare 3, is a PS4 exclusive mode until October 26th 2020.  Wherever the blame ultimately lies, I find this to be one of the most egregious publisher deals in respect of timed exclusivity.

Perhaps such deals wouldn’t make such a fuss if the standard Spec Ops missions weren’t so half-baked.  Each operation serves as a continuation of the campaign where up to 4 online players are tasked with completing what’s essentially a raid.  The further you progress the more infantry is vomited out to the point of straining believability.  Although you can take several hits before going down, the artificially-inflated number of enemies suggests this wasn’t ready for launch; add to the fact that potential extra rewards are listed with a “Coming in November” watermark and the evidence suggests this was an afterthought.  Seems fair to treat it the same way in this review.

Competitive fares better thanks to the plethora of options:

- Ground War (new mode supporting vehicles and up to 64 players).

Ground War’s grand scale initially clicked with me until maneuvers became routine again.  When even small bits of debris can halt big tanks or APCs the epic battles diminish in possibility compared to Battlefield.  It’s also limited to two maps as of now, neither are bad but nor are they top-tier.  The plurality of more intimate, three-lane Gunfight maps, however, is part of what makes it so interesting.  Replacing custom loadouts and killstreaks with preset weapons and one-life-per-round stakes should be a prerequisite alternative from here on. 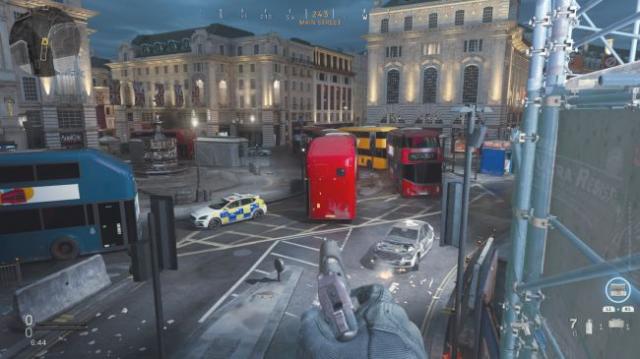 Dozens of clones have come and gone yet few still match CoD’s Skinner Box template of disparate weapon, ability, and attachment unlocks.  Even for someone who has lost track of all the subtle nuances supporting this system it’s tough to deny how it hooks you back in.  The thorough stat-tracking that’s considered, the various challenges that range from dailies to selectable missions, and all the custom attachments and paint jobs are all complemented by a clean UI.  And it’s the first in the series to support cross-play between PS4, Xbox One, and PC.  All these wrinkles outside of combat felt easy to explore and understand.

For all the good these modes and touches do to sustain engagement, Modern Warfare has one of the most disappointing launch map collections in respect to mid-scale fights.  It’s a coin toss between getting something I enjoy (Gun Runner) or loathe (Caves).  Across several maps, there are some insanely beneficial angles into spawn points that cause me to wonder how they got past testers.  Combine this with current weapon imbalances (725 being my most hated), the improper sound mixing with boots or unnecessary callouts, and I’m left waiting for it to get out of its beta phase.

Make no mistake: there is a slightly more tactical approach to appreciate across these surfeit modes—including a night-vision variant added in update 1.06, but it’s easy to notice release-rush affected competitive multiplayer.  With it adopting a Fortnite-like Battle Pass system in lieu of map packs, I hope it’s worth going back into soon. 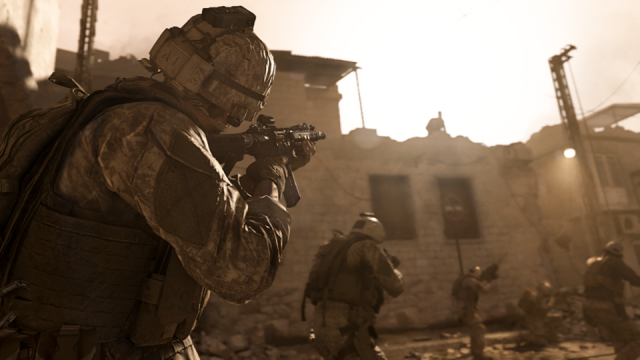 Call of Duty: Modern Warfare is a game unsatisfied with the series’ expired technology but not much else.  It’s a reboot that so glibly grabs from more memorable campaigns of the past and relies on cheap shocks to distract from that.  The multiplayer supporting it ranges from sub-par cooperative options to promising competitive modes in desperate need of tweaking.  Where this reboot stumbles can be plainly seen when measuring it in two distinct categories which the original so easily surmounted: its past and its competition.

This review is based on a digital copy of Call of Duty: Modern Warfare Operator Edition for the XOne