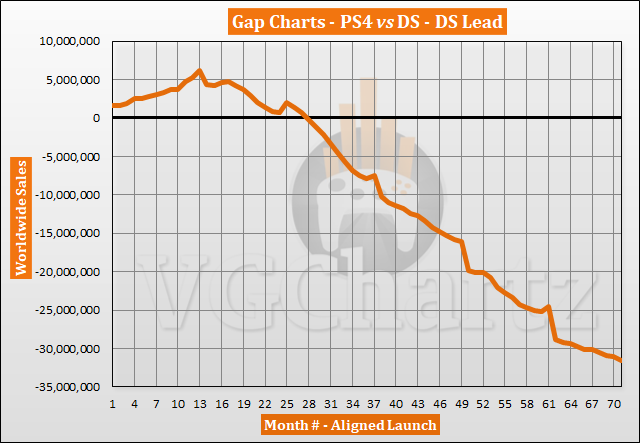 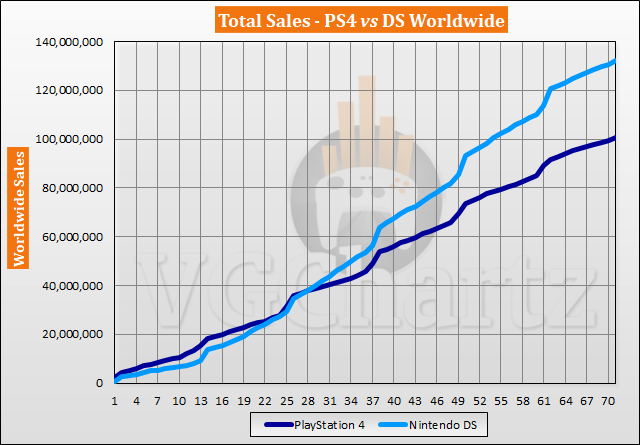 Wow, even this late in the lifecycle the DS has the stronger momentum.

Yes, this is one of the last months the DS will beat PS4.. from christmas onwards PS4 will beat DS with much. DS makes 8M next year, then 3M, then under 1M.. PS4 will make much more than this the next 3 years

DS is the one recent Nintendo console that had fairly decent legs, so it keeping up this late isn't such a surprise. It still had worse legs than any PlayStation other than the Vita, but for a Nintendo console it's legs were excellent.

Only way is Ps5 becoming a big flop.

DS was a monster, it's impressive PS4 is as close as it is.

The cheapest DVD player helped the long tail sales of PS2. PS4 don't have that feature. Ps4 sales will be similar a PS3 sales trajectory. Second, Sony console don't have domintance in majors areas, like the USA and Japan.

yes, but the sales of PS2 after 2005 are not because of the dvd anymore.. dvd was new 2000. by 2005 the dvd was mainstream and only a fraction of the sales could be because if the dvd. and yes sony console does not have dominance in usa but as a hime console its dominating usa. and I am just saying that is possible to reach 150M not that 100% will do it. but 100% will make 130M at least. and no it will not do only 7M like PS3 after PS4 launched. PS3 wasn pricecut and was expensive and ps4 was cheap. now ps4 larts are not so expensive as ps3 were back then so it will get pricexut soon to 199 probably. and with ps5 being 500 or even 600$ at launch the difference is big. many people will opt out for the budget version which will be ps4. with the ps3 noone had a choice.. 299$ or 399$ for next gen. anyone would pic ps4