NOTE: This review contains spoilers for The Legend of Heroes: Trails of Cold Steel III. It's not recommended to read further if you plan on playing the third game in English.

While Western fans are no doubt overjoyed by the announcement that The Legend of Heroes: Trails of Cold Steel III is coming to PS4 this fall, Japanese players could already witness the conclusion of Falcom's hit JPRG series following the release of Trails of Cold Steel IV late last year. Expectations were extremely high and developer Nihon Falcom faced a difficult task to meet them.

After the final events of Trails of Cold Steel III, the whole continent is on the brink of collapse as Trails of Cold Steel IV kicks off. The curse of the Erebonian Empire has spread and infected the minds of many and the whole country is preparing itself for war. Rean has given up the fight against the demon within himself and is trapped in a underground base; Ash wanders around without a sense of purpose, deeply affected by the murder he's committed; Myuse has left without a word; and the remaining members of Class VII wake up stricken with despair in the village of Erin, where Emma and the other witches live. Not to be discouraged, Rean's friends muster their courage in order to save their leader and prevent war from breaking out. 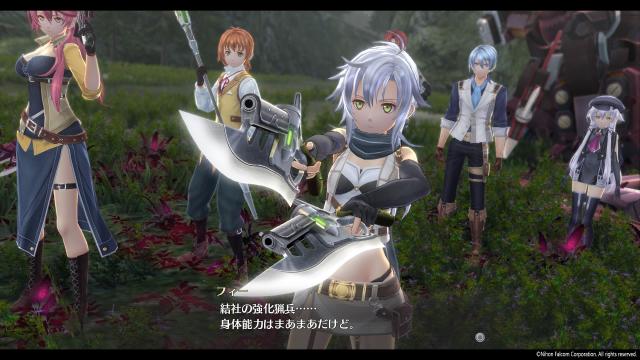 From there, Falcom's title is divided into four major phases of uneven interest and length. The game lasts more than 100 hours but it's unfortunately badly paced at times. The group, for example, searches every region of the Empire in order to discover Rean's exact location, but later visits the exact same places again so as to rescue more comrades. This means it fails to give the player a real sense of a grand RPG adventure. The story is also a little bit too neat and tidy, in contrast to the previous entries which managed to be more surprising. In short, Trails of Cold Steel IV lacks an appealing narrative structure. 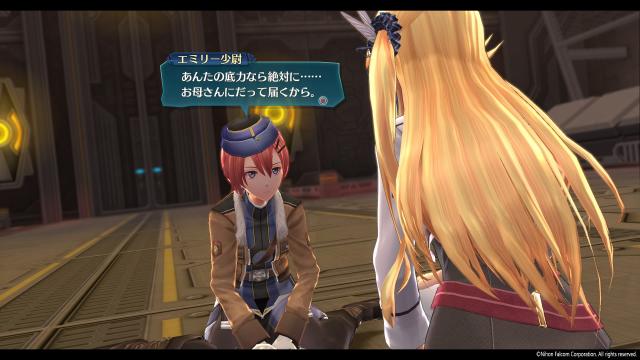 After the stellar Trails of Cold Steel III, I can't help be disappointed by the final part of the narrative in particular; it's very poor in terms of plot twists and lacks intensity most of the time. The atmosphere is ill-fitting for the end of a saga and, while the world is about to end, Rean and his allies are still asked to 'prove their strength' all the time.

Underpinning this atmospheric mismatch is the fact that the player is often thrown into encounters that look like sports matches, rather than battles to the death. Trails of Cold Steel III was much better designed in this respect. And ultimately, it's a game in which the villains aren't really all that bad, so the narrative lacks a strong sense of adversity and emotion. It left me to wonder whether the series' exceedingly friendly atmosphere hadn't gone a bit too far. 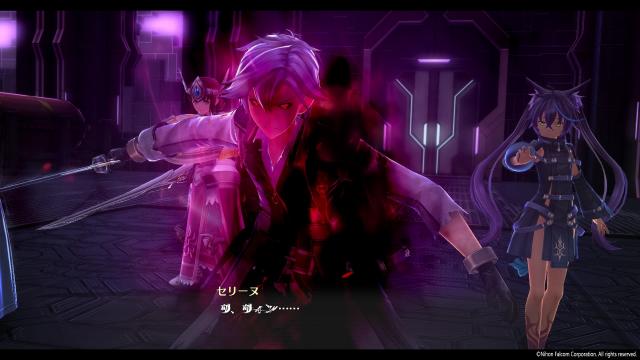 Of course, that's just an inadequate overall summary. Over the 140 hours that it takes to reach the end credits there are certainly some enjoyable parts. In particular, the rescue of Rean is unforgettable, featuring a perfect sequence of events that are breathtaking, loaded with epic fights, and stunning surprises. The endings themselves - both the 'good' ending and the normal one - are elegantly told too. Both of them are quite moving, but the 'good' ending is definitely the best, if for no other reason than for the spectacular final fight it features.

Trails of Cold Steel IV also continues the very rich universe that's been built throughout the four games. Most of the secondary quests feature a short story involving characters from the whole saga, even the less important ones. Even random NPCs have tons of lines and little background stories of their own. Given the large number of secondary characters, Falcom couldn't fully integrate all of them in the story (the Thor students introduced in Trails of Cold Steel III for example don't get much screentime), but the huge number of side stories and humorous events leaves no doubt that Trails of Cold Steel IV is the climax of a great saga. 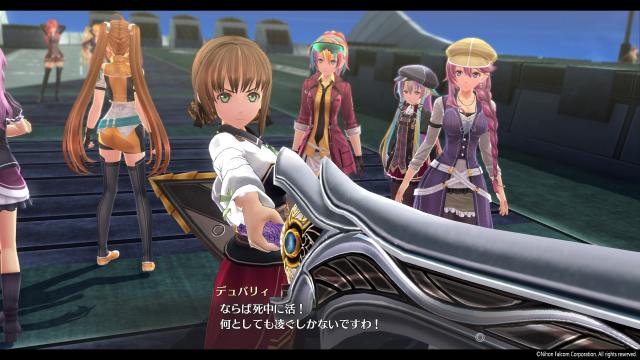 The secondary characters are great, but the main characters are of course a lot more important. Trails of Cold Steel III was fantastic in terms of playable characters, so expectations regarding the last game were quite high, and Falcom had teased fans by saying that the cast would be massive. Which was technically true - the player can control even more characters than in the previous entry - but this isn't always necessarily a good thing. 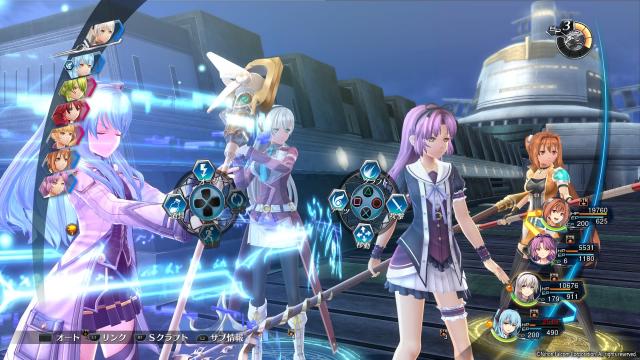 Trails of Cold Steel IV also receives an impressive number of guest characters, including a large part of the cast of Ao no Kiseki and Sora no Kiseki. But unlike Trail of Cold Steel III, you come to actually play them only for a very short period time. Despite the undoubtedly rich gameplay and the large array of combinations and fighting styles, I can't help thinking that the game could have offered even more. It lacks a post-game dungeon where you could use all the characters, for example, which was something that had been included in Trails of Cold Steel II.

I'm fully aware that my take on this is entirely subjective and that I might be asking for too much, but some of the main characters from before have also been ruined. Elise, Alfin, and Claire aren't playable anymore and get so little screentime that it's almost outrageous. 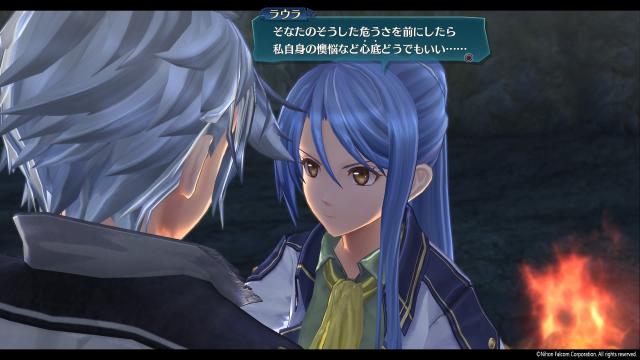 As Trails of Cold Steel IV ends the saga, Rean must also end his love affairs with the numerous girls. Some of them are clearly cuter and more interesting than others (Emma's segments are exceptionally fun), but the funny thing is that relationship progression is designed in such a way that the player can date all of the female characters in one walkthrough. The whole game is actually loaded with dating events, but you can also deepen your friendships with male characters as well.

The gameplay is generally unchanged in Trails of Cold Steel IV, although a few tweaks have been made. Trails of Cold Steel III had already optimized the formula quite well so there was no need for big changes anyway. What has changed is that orders can be improved by clearing challenges hidden in treasure chests that are scattered within the various regions. Some characters also receive new highly destructive S-breaks. At full charge, these ultimate attacks deal considerable HP damage. The major change, however, is that certain enemy characters can now use their own orders, which makes those encounters significantly harder. Their orders cancel yours, so you really will need a plan B.

Rean's berserk mode has evolved a bit - the protagonist can now unleash the full power of the curse within him, boosting all his stats at once. You need to be careful though, because he can hold only three turns in this state. Series fans will also be pleased to welcome back the Lost Arts, the rare and dramatically powerful magic introduced in Trails of Cold Steel II. Those spells cost all of your MP and can only be used once per battle.

The progression system in Trails of Cold Steel IV is also less linear than in the previous title, with the Lost Arts being hidden in remote locations of the Empire, along with a couple of other surprises. There are now quite a few discoveries to make simply by roaming here and there between main story segments. 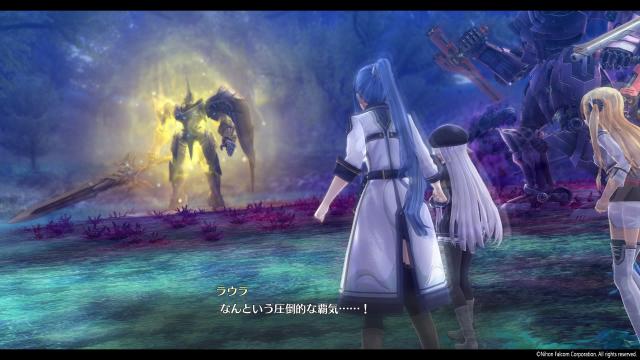 Mecha battles have been made a lot harder than before. The Kishins - the mythical robots of the Trails of Cold Steel series - enter the final confrontation between each other, and only the best survive. Opponents have no mercy; they chain critical blows and S-breaks so quickly that your party can barely catch a break. Here, at least, Trails of Cold Steel IV gives the impression of a real climax. 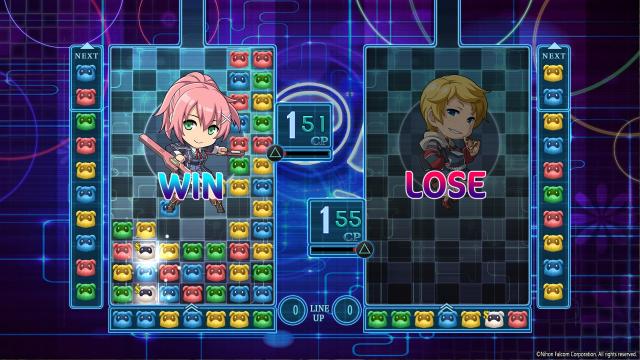 Trails of Cold Steel III was already rich in terms of mini-games, but Trails of Cold Steel IV includes even more. In addition to the card game, this fourth game adds blackjack at the casino, a theme park, and an addictive clone of Sega's Puyo-puyo. Finding and challenging all of the possible competitors in the story is a big side quest in and of itself. You can now also choose former Class VII characters when fishing, but unfortunately this possibility hasn't been extended to all of the characters.

In terms of visuals, the game uses the same old-looking engine, so don't expect to be impressed on that front, especially when compared to the best-looking games in the genre. Nevertheless, you'll probably notice more detailed character modelling in this entry. The music has been a strong aspect of Trails of Cold Steel since the second episode, and the saga ends on a very positive note again. Battles themes are particularly impressive, my favourite being Deep Carnival, and the music on the world map is also beautiful, reminding me of old-school JRPGs. The most striking track is Lyrical Amber, which actually brought tears to my eyes.

Really enjoyable in some respects, but very disappointing in others, Trails of Cold Steel IV is maybe overly long considering the story it wishes to tell. The overall narrative just isn't very compelling and suffers from poor structure. While it's still very emotional at times, it doesn't include enough surprises to match the experience offered by Trails of Cold Steel III. Elsewhere, the battles are still extremely good, there's a great choice of characters, and the visuals have improved slightly.

This review is based on a retail copy of The Legend of Heroes: Trails of Cold Steel IV for the PS4

Cold Steel IV has yet to be announced for western markets? But I have my copy right now. In my hands.

lol I didn't even catch that I just assumed he was reviewing the NA version and got it early. 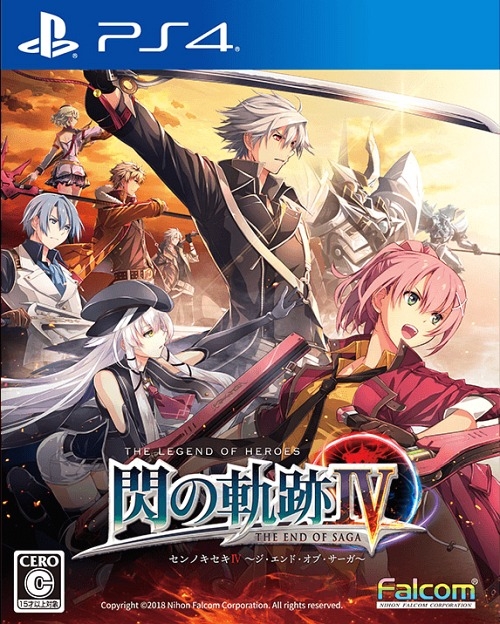 The Legend of Heroes: Trails of Cold Steel IV

The Legend of Heroes: Trails of Cold Steel IV