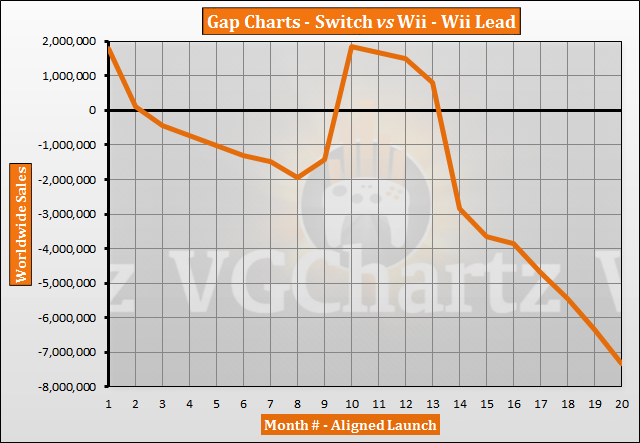 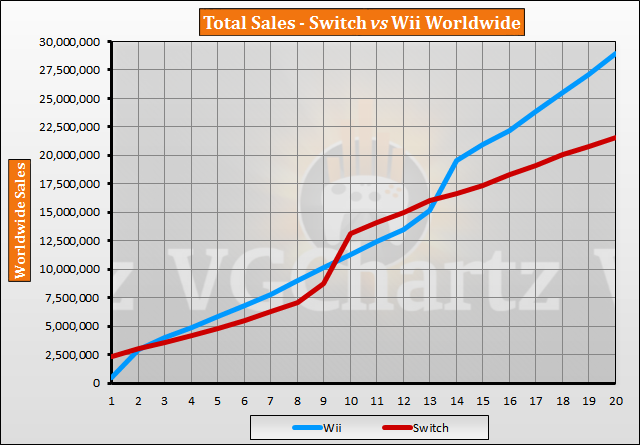 Regardless of the current sales gap, I think it's too early to predict whether or not the Switch will outsell the Wii since its sales plummeted after the first 4 years, which is not typical of the average console. I think the Switch will have better legs long term.

This doesn't make sense. Nintendo is always front loaded and so you can expect to see a similar drop after 4 years. However, the Wii will be so far ahead by then that I'm not sure how you are expecting it to get to 100 million.

Nintendo's portables haven't been nearly as front loaded and with the Switch acting as a successor to the 3DS, 100 million is certainly possible.

I agree with SuperNintend0rk. I tend to think Switch sales will increase next year, and continue to sell strong for the rest of it's life. After the 4 year mark the Switch will definitely be closing the gap between it and the Wii.

As for this statement, "Nintendo is always front loaded", that is actually not true. Some of their consoles are front loaded and some have a very healthy tail.

60% of the time, Nintendo has a very healthy tail. And it is not a coincidence that all of these consoles had good third party support. Switch already has a ton of third party games with a lot more on the way. It is clear that Switch is going to get the same kind of third party support that it's handhelds always get (or better). This kind of support always leads to a strong tail end. Just look at the 3DS, it still is selling and it still has games slated for 2019. That is what we should expect from the Switch too.

I agree with you 100%. I couldn't have said it better myself!

Switch sales are below what it should be trending at, because Nintendo didn't release any strong titles this year until the holidays. Give the console at least 12 more months and then we'll a curve that is more indicative of it's lifetime sales.

For comparison: Wii lead against PS4 was ~6 Million at Month 22!

You should wait middle of december this month before giving any pronostic.

I don’t think it’s going to make much of a difference. No way is Switch going to clear this 6 million difference when it’s entering one of the most competitive holiday seasons ever. Switch will sell well LT, but will most likely peak in 2020, due to PS5 likely releasing later that year.

My guess of 65 million is looking more and more accurate. People should shy away from comparing it to the Wii to determine its success. Its like comparing any console to the PS2. If you are saying a console needs PS2 numbers to be successful, that ridiculous. For Nintendo, the Wii should be considered an outlier. If you do that and compare the Switch to their other consoles, you will see it is a crazy success.

I don't see anything that points towards 65 million LTD

I highly doubt the Xbox will get to 50 million.

@cosmicsex why ? xbox is at 39m now, it will make around 3-4m in the rest of the year, every year until now xbox one have made between 3-4m in the last month or 2, so with december sales and the rest of november xbox one should be easily around 43m and many of the years xbox one have made around 7-8m a year, so put it even with some sales down for 2019, let's say 6m it will be around 49m with 2019, and it will easily made 1m and even much more for another probably 2 years ( assumed live left in it ) so it have a chance to get to event 60M at best I would say