Who would have thought that two relatively unknown and distinct indie studios would collaborate to create what could very well be one of the stand-out action 2D shooters of the year? We’re talking about a title that invokes shades of classics like Contra and Metroid, which makes it so surprising that it seemingly came out of nowhere. It’s particularly odd as neither Killhouse Games or Pixelshard - who are known for just a handful of elaborate strategy games and basic puzzle titles, respectively - would ordinarily produce such an experience.

Those who have played Killhouse’s premiere series Door Kickers might be surprised to find that this spin-off, entitled Door Kickers: Action Squad, is about as different an experience from its predecessors as possible. Throw out the common thread of SWAT teams busting in and rescuing hostages, and it feels like a completely different universe; one inhabited by a cheesy action flick rather than a realistic tactical sim. Rather than focusing on pointing and clicking within an overhead grid and initiating commands ahead of time, Action Squad completely flips things on its head, instead going full-throttle with real-time action and reckless, arcadey run-and-gun gameplay. 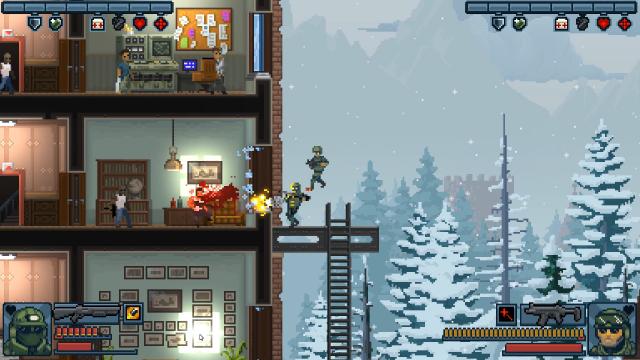 Any sort of strategy elements are kept to a minimum, and mostly relegated to an easy-to-manage loadout menu and subtle in-game decisions. In this menu, you can purchase upgrades like increased health and quicker reloads through a sort of universal currency of stars, which also doubles as a skill rating upon completing a stage. The tactics of Action Squad basically boil down to swiftly and evasively gunning down baddies, swooping up hostages without getting them killed, and occasionally disarming a bomb, all without dying. Instead of a top-down view, you’re given a simple side-scrolling perspective, with a charmingly retro 8 bit aesthetic slapped on.

In true oldschool fashion, there’s little in the way of a narrative, tutorial, or other fluff; just mindless, white-knuckled action. And while everything feels almost cartoonishly basic, Action Squad manages to do a lot with a little. It provides adrenaline-pumping excitement, crisp, responsive controls, and a difficulty level that hits that sweet spot and makes you want to kick down just one more door and knock out another one of the several dozen stages. 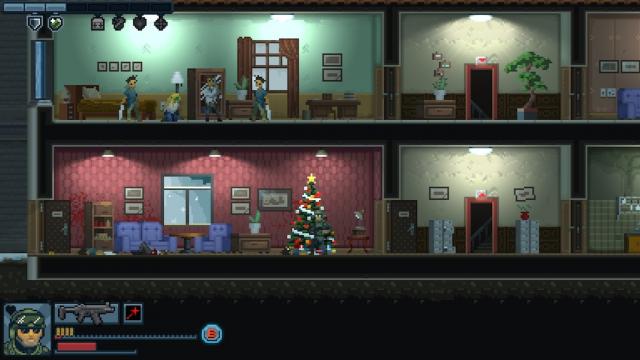 You’ll notice upon jumping in that you can pick between a handful of SWAT trooper classes. These run the gamut from a smg-spraying Assaulter, to a stealthy Recon, to a slower, clunkier trooper wielding a pistol and a giant shield. Each class comes with a unique set of stats, weapons, and specific ability nodes. You can also build up to extra resources, illustrated by a progress bar at the top-left of the screen during your run, by taking out strings of enemies without dying. This allows you to whip out handy first aid kits, gear refills, and class-specific ultimates like spiner support which picks off enemies on screen instantaneously.

The name of the game is essentially to breach each room throughout the multileveled indoor environments, frantically fire off shots, and take out each of the gun-wielding henchmen while taking care they don't unload on you or the hostages, which you must un-tie and release. Sounds simple enough, but there are a couple of catches here. One important mechanic to note is that holding down the trigger button for prolonged periods will cause you to go full-Rambo and spray bullets all over the place, conveniently missing baddies and making you vulnerable. This means that swift button tapping is often vital. You’ll also need to make sure to keep hostages out of harm's way, as you risk killing them either directly or by trigger-happy foes, and can lose valuable points if you make a slow, noisy, or otherwise clumsy entrance. Thankfully the hostages are usually kneeling, so your shots will typically whiz over their heads during the heat of battle.

While many rooms are darkened and can only be revealed once you’ve busted down the door, some give you a full view of what’s happening, allowing you to plot your attack before you enter and alert them. Should you take the back entrance where there is less firepower awaiting you? Opt for a quick and clean long range spine? Take cover behind that nearby crate? Maybe toss a blinding flashbang into the overcrowded area? Making the right decisions in these sorts of scenarios can mean the difference between life and death. Though often just plowing through with enough firepower and getting your shots off quickly is enough to satisfyingly neutralize all threats in a particular area. 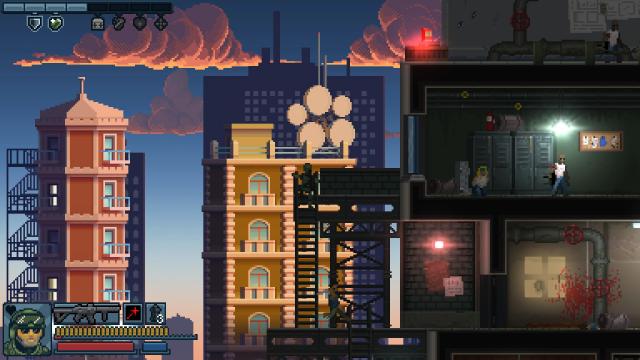 You can also play either a local or online co-op mode. While the online play is quick and easy to set-up, the simultaneous local multiplayer is where the true fun lies. Kicking back and busting down doors with a buddy is an experience that feels tailor made for this game, as you can take advantage of using multiple classes at once and increase your firepower. You may choose to take on the close-range enemies, while a friend picks them off from afar and handles hostages. You can also revive them, which makes for quite a useful ability.

Door kickers: Action Squad is a thrill to play through, even with its almost overly-pixelated graphics, stiff controls, and moments of frustration after being abruptly gunned down by an overpowered henchman. Everything feels crisp, tactile, and visceral; not just gunning down or blowing up groups of foes, but even the simple act of breaking through windows and doors. It really feels like an overtly violent version of an old NES game that never was, or a playable 8 bit action movie. All we need is Bruce Willis or Arnold Schwarzenegger to complete the scene. This retro charm is further enriched by the deliciously 80s synthwave and guitar riffs that complement the action nicely. 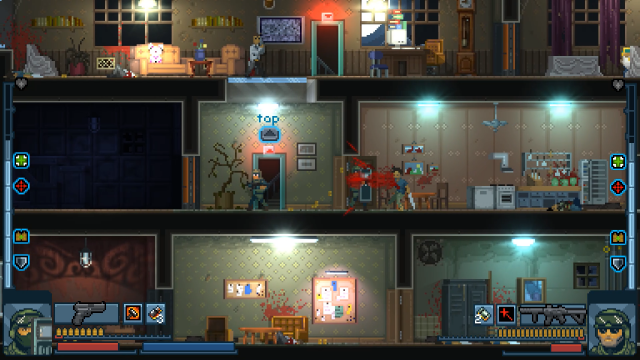 If there are any blemishes, they mostly involve the basic, sometimes repetitive nature of the game. Yet, the scope and difficulty escalate at a nice pace that keeps things interesting, along with the array of unlockable weapons, gear, and abilities to toy with. There is a fine blend of fast-paced button mashing with a hint of tactics fans of the original Door Kickers will recognize. Those who like their shooters action-packed and intense, especially those who appreciate that late 80s retro gaming flavor, will certainly get a kick out of this one.

This review is based on a digital copy of Door Kickers: Action Squad for the PC, provided by the publisher.