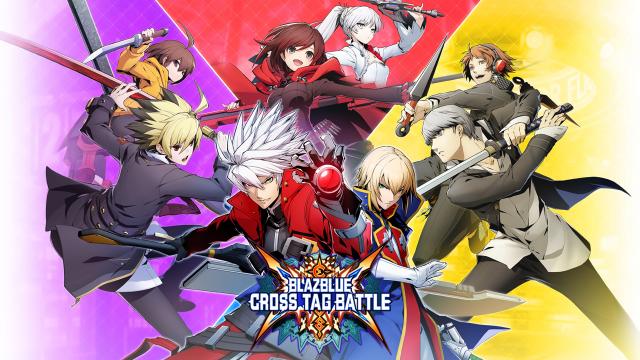 When you have several independent games or franchises, it's often a good idea to unite them in a cross-over title. After countless iterations of BlazBlue, Under Night In-Birth and Persona 4 Arena, Arc System Works has finally decided to gather all of its characters from these series and have them face each other in an ambitious cross-over.

BlazBlue: Cross Tag Battle is a 2D fighting game in which you always play a pair of characters. 2 vs 2 is the absolute rule here, in all game modes. PQube's game comes with a story mode, traditional fighting game modes such as training and survival, and a vast online mode with lots of matchmaking options. The training mode is fairly dense and proves a big help for newcomers or people like myself who tend to play more 3D fighting games such as Tekken or Dead or Alive. I was able to master all of the important moves and controls in a few hours and was then ready to put up a decent fight against global competition.

I wouldn't say that BlazBlue: Cross Tag Battle is accessible to everyone, however, but rather to anyone who's willing to put some time and effort into learning its intricacies. It takes a lot more skill and practice to keep up with opponents than in most 3D fighting games and you can't just expect to win while knowing just a few moves - you need a much more rounded and complete knowledge of how the battle system works as a whole. 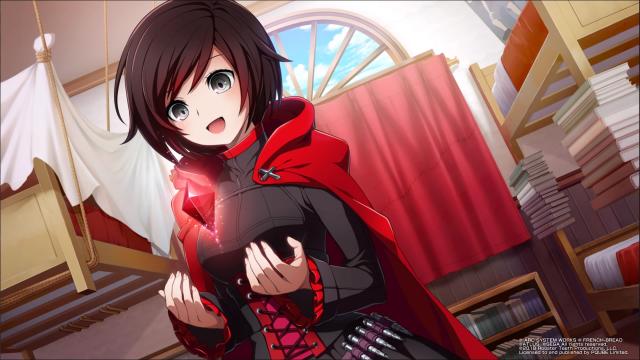 The story mode contains four different narratives (one for each franchise present in the game). That said, narrative might be a bold word to use in this case - there actually isn't much in the way of storytelling at all. All of the game's characters are transported to an unknown world and told by a strange voice to fight each other. You play as the main character from each represented franchise (so Ragna in the case of BlazBlue, for example) and they'll pair up with anybody who makes an appearance so as to progress towards their goal.

To make things worse, the true identity of the mastermind behind these events is nothing but a severe disappointment. Another letdown is that the story mode completely blocks PS4 share, even though there's really nothing to spoil. Granted, the conversations between characters from different franchises and worlds can be a lot of fun, like the part where Ruby seems convinced that Yosuke and Yukiko are respectively a ninja and a geisha. Dual audio is greatly appreciated here. But in all it's a fairly weak story mode, and the lack of arcade mode compounds the issue. With an arcade mode at least you could have fought the CPU with your favorite characters and not just those randomly chosen by the lacklustre storyline. 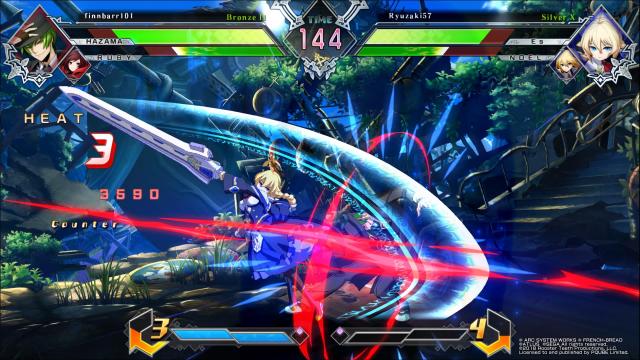 But story mode is definitely not the main attraction of fighting games nowadays. The gameplay is lot more important and BlazBlue: Cross Tag Battle is at the same time orthodox and inventive when it comes to gameplay mechanics. Each character has one or two basic combos and a couple of mid/long attacks that you can combine to create a more efficient chain of attacks. Unlike most 3D fighting games, here a combo starts only if the first blow hits (you can't expect to make an approach while executing your combo). There are some exceptions, like Noel, but counters are punitive.

It's therefore a very technical experience as it takes skill to manage the adequate distance between yourself and your opponent. Fortunately, there are a lot of clever ways to close the gap, depending on the character. Ruby, for example, has a sort of flash move that teleports her slightly forward. Adding to this, you have a special attack called a reversal, which is handy to counter a rival's offensive; and an ultimate move called a distortion skill, which is a powerful strike that can be linked to any another move, but costs some skill points. Skill points are limited but they refill during the fight. 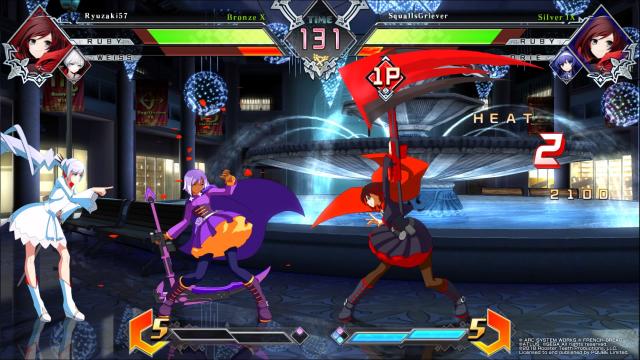 All of that refers to what you can do with one character, but the 'Tag' in the title isn't just there for show - BlazBlue: Cross Tag Battle features highly advanced and elaborate interactions between your two characters. Basically, you can 'tag' in your buddy using R1. Doing so will consume half of the assist gauge but it refills quite quickly so you'll be able to use it fairly often.

R1 causes the partner character to appear and deal a blow to your enemy, which can either be connected to your current combo or serve as a counter in a defensive way. The circle button causes both of your characters to corner your opponent and hit him/her several times. And while it requires more complicated inputs, you can also summon your buddy to perform a combo at the same time as your active character. That's called a double combo. Last, but not least, your second character can connect his/her own Distortion Skill after you've landed yours. Let's say that you connected a Distortion Skill to an initial combo, it makes for a highly destructive chain that can be used by trained fighters. Another important mechanic is that your tag partner can interrupt an opponent's combo by replacing your active character, essentially 'rescuing' them when they're in a lot of danger. All of that is a lot of raw material to play with and build your own tactics around, so the possibilities feel almost endless. 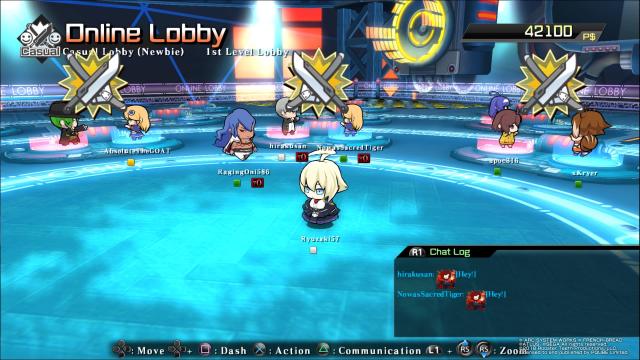 Online lobbies are fairly original for a fighting game, since you actually walk around with your avatar until you find an available battle kiosk. When someone joins you at the battle kiosk, the fight can begin. There are also a wide range of stamps that you can quickly display to exchange greetings with opponents before and after the match. One lobby can gather up a maximum of 64 players, and there are several of them for each region of the globe. There are different kinds of lobbies, from ranked ones to rooms especially designed for new players. But the best way to enjoy online competition remains the standard matchmaking: you just have to pick the 'entry' option in the online menu and wait for someone to challenge you.

Matchmaking seems extremely accurate and the game has no problem finding opponents with a similar score. The balancing of online matches is therefore a clear strength of Cross Tag Battle and it really maximizes enjoyment. After all, there's nothing better in a fighting game than close fights between players of a similar skill level. Another strength of the game's matchmaking is that you can continue your activities in solo modes in-between matches. So, for example, you can practice training while you wait for a rival. The final delightful surprise is the excellent replay gallery, which records all of your online matches and allows you to take screenshots mid-replay.

The disc comes with 20 characters, which is by no means bad, but the constant showing of DLC characters in the story mode ends up leaving the impression of a half-complete game. BlazBlue: Cross Tag Battle comes at a base price of €40 but there are at least 15 characters that are locked behind a paywall of five DLC packs of €4.50 each. Arc System Works eventually decided to make two RWBY characters free (a nice gesture, since it's the first time the RWBY franchise has appeared in a video game, and its characters are great addition to the game). But that still leaves the problem of the first DLC pack, which was available free via pre-order in Japan, but not in Europe. PQube did mention it should be free but unfortunately so far EU players are playing second fiddle here.

BlazBlue: Chrono Phantasma originally came with 23 characters so maybe it's not such a bad deal, though it's worth remember that all of the characters are existing assets and you're likely just purchasing unlock keys. It's difficult to assess the right and wrongs of all this; the Kafkaesque DLC marketing is very off-putting, but there's no arguing that the roster itself is quite exciting. 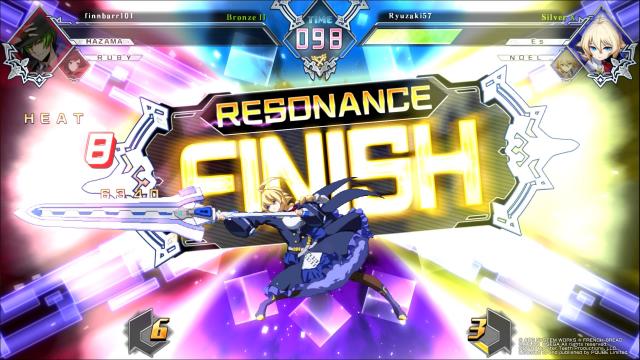 Despite being a simple 2D fighting game, BlazBlue: Cross Tag Battle is visually stunning and lavish graphical effects accompany pretty much every type of attack in the game. They're also incredibly varied moves, with tons of cool or amusing animations, and of course they're very coforful. The abundance of customization features (icons, plates, avatars, etc.) makes the non-fighting parts pleasant as well. The soundtrack turns out to be rich too, with many themes borrowed from the represented franchises as well as new remixes. The music taken from the RWBY series is especially epic and bolsters the intensity of the fights.

Despite a weak solo mode and an excessive DLC storefront, BlazBlue: Cross Tag Battle is an excellent outsider in the fighting genre this year. Beautiful to look at and also great in the sound/music department, it's the kind title you can come back to over and over, especially when the online aspect happens to be so remarkable.

This review is based on a digital copy of Blazblue Cross Tag Battle for the PS4, provided by the publisher.

I was interested in this game, however the amount of DLC (half of the roster?!?) was just way too much of a turn-off for me, so I'll be waiting to see if another version of the game comes out. Unfortunately Centralfiction doesn't seem to have an Extend edition in the pipelines, so maybe this won't either.

I still find it very odd how they handled this. They have half the roster for DLC, but priced the game at bellow standard, $50. Soooo it's simultaneously a ridiculous DLC policy and priced...fairly? In which case I fail to see the point? Why not just take half that DLC and put it in the game, sell it for $60 with just $10 of DLC? Would have caused much less fuss and gotten the same returns...