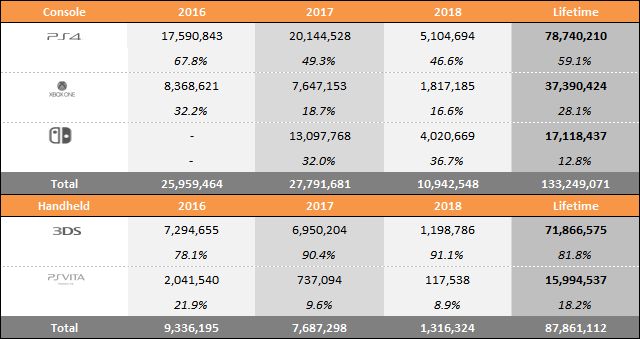 Ps4 is a monster, even in fall, has already opened one million against switch.

In fairness, the PS4 didn't have much competition early on.

Erm, wait a sec, I thought I was looking at a launch-aligned count. My mistake.

Will possibly get reversed in summer. The million advantage of the PS4 comes from Monster Hunter World boosting sales a lot and Switch not having many higher profile releases until this month. It looks like more games will come in summer to the Switch than to the PS4 though, so a reversal is quite possible

This must be the first time in a long time that an early generation handheld is behind a late-ish generation home console. Wouldn't be surprised if Switch takes out the full year. I expect it to be pretty huge this Christmas. But it's hard to deny that dedicated handheld consoles is no longer a growth market.

EA suggests otherwise, i'll rather take their opinion, no disrespect.