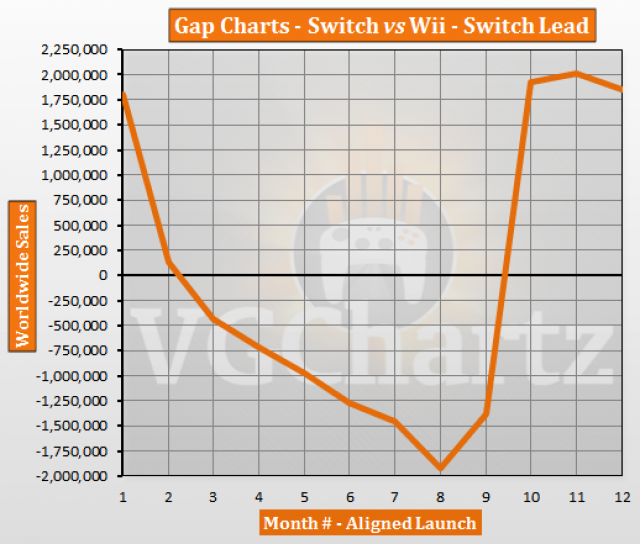 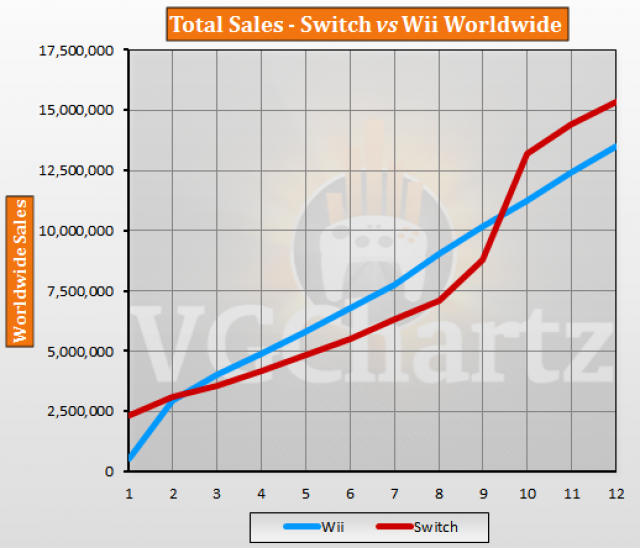 February 2018 is the 12th month that the Nintendo Switch has been available for. During the latest month the Wii has closed the gap with the Switch slightly. The Wii outsold the Switch by 163,341 units. The Switch is currently ahead of the Wii by 1.85 million units.

Wii seems to be doing better for the most part when you consider the circumstances. Switch might have better legs but I don't think it's winning this one.

Supply confined the Wii at this point until 2009. In Europe at least, it seemed they didn’t last on sale anywhere at retail until Spring 09.

I just don't get it so someone can explain me the method here :
Nintendo announces 14,86M at December 31th 2017. Here 2 months later we are at 15,33. But approximately 1M/month was counted for January and February. Why we don't see a number more around 16,8M for the first 12 months of the Switch ?

I believe this is because vgchartz does not provide 100% accurate information since that would probably be impossible. I saw the 14.86 M number too at that time and I think that came directly from Nintendo while according to vgchartz it had only sold around 13 M at that time. I think vgchartz has been slightly undertracking the switch's sales so it probably has sold more than 15.33 at this time. That's what I think it is at least I could be wrong.

I don't believe that there was 2 millions of Switch waiting in stores. This doesn't make sens : at the begining of the year we had still some supply issues reported, at least in Japan. I rather think that VGC can't be 100% accurate and adjusts some months later every values, so they prefer to count it less than more and add the few missing later. They also certainly can't get the other world regions data (out of US/JP/FR/UK/GE) which represents 8-10% of the sales.

I had never seen before, a so huge amount of son of bitch in a forum. VGCHARTZ is unique for that. When I see the number of red thumbs that I get for no reason. But I had noticed already that everytime someone here try to write something a bit detailed with arguments, he get hit by red thumbs. Meanwhile, everytime someone put a short, pretencious simplist and even sometimes impolite comment, he get full support with many green thumbs.

Month 1 for any console in the various comparison charts can greatly differ in the amount of days. Wii launched on November 19th 2006, so only two weeks of tracking went into its month 1. Switch launched on March 3rd 2017, so it had four weeks in month 1.

The cutoff for Wii's month 12 is the last week that ended during October 2007, so this adds to the discrepancy in the methodology that is used in all of the comparison charts.

Wii will take the lead in either month 13 or 14 due to entering its second holiday season. Wii will have quite a big lead after month 14.

Thanks buddy. I get it. It's a calendar month alignment. It's just a bit confusing as 12 month figure is actually different than first year figure (aka first 52/53 weeks).

Wii was only good for Wii Sports. Will had some great games like Galaxy 1&2 and Skyword Swors but they would have been better on Xbox 360 or PS3.

Why...why would you even say that?