If any game exemplifies the adage "don't judge a book by its cover" it's SpeedRunners. With crudely-drawn models, a comic-book veneer, and 2D platforming gameplay, SpeedRunners could be dismissed at first glance as inconsequential. On the contrary, SpeedRunners is an incredibly fun and exciting racing platformer that's accessible for beginners and competitive enough to be made an official e-sport by ESL.

SpeedRunners is an arcade racer where up to four speed demons race around one of several themed tracks. Unlike the tracks in Runbow, which terminate at a trophy, each track in SpeedRunners loops endlessly until only one racer remains. If all racers are evenly-matched and refuse to fall behind, the game will eventually trigger a sudden-death mode where the corners of the frame move inward, gradually creating a smaller and smaller window for the racers. 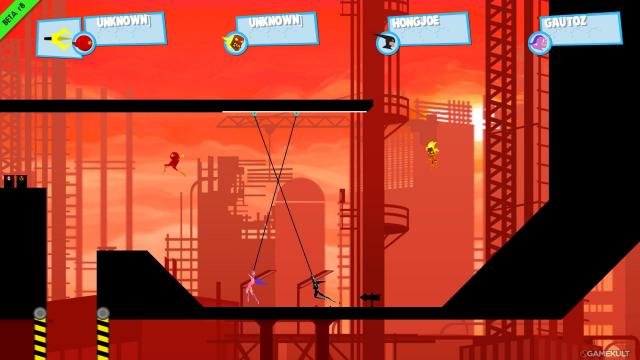 Racing around each track is a delight, especially with friends in the mix. Players have several moves at their disposal, which can be used for movement and defense. They can hop over boxes, slide under low barriers, grapple onto ceilings, and engage a boost to leave opposing racers in the dust. Item boxes scattered around each map bestow upon players one of several useful items, including a golden grappling hook which pulls players backward and a bomb that can be detonated remotely.

All these mechanics and special items combine with some well-designed maps to create a fun and frantic multiplayer experience that's never the same thing twice. Maps are filled with short-cuts, hazards, and path-blocking levers that create a lot of unpredictability (and room for strategy) during each lap. Adding to the fun are some wacky characters, including Hot Head, a flaming Tiki torch man; and Gil, who dons a shark costume.

In addition to several multiplayer options, SpeedRunners includes a tutorial, practice with computer-controlled bots, and a campaign of sorts. Offline matches with bots are a welcome addition, as is the tutorial, which trains rookies in the game's basic mechanics.

The campaign, which includes 16 courses playable in four different difficulty levels is a fine mode, but a little undercooked. Still, it allows players to unlock new characters and comics, and serves as an aperitif to the game's true purpose: competitive multiplayer. 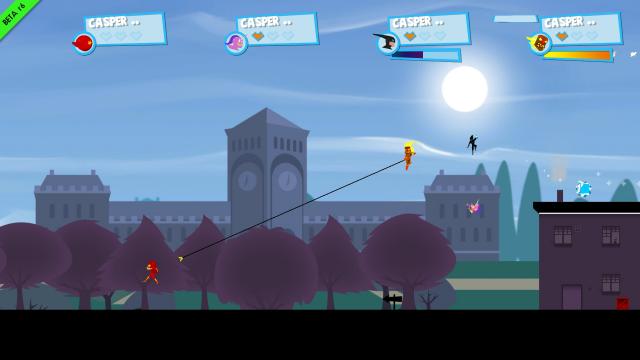 SpeedRunners is a game designed for multiplayer and it shows. Four players can compete locally or online for bragging rights. During online matches, players will use the Xbox One's right stick to bring up one of many stock phrases, including "Good game!" and "Grrr" — the latter particularly useful for all those unforced errors. With the right group of friends, several rounds of SpeedRunners matches could make for an awesome evening. With its best-two-out-of-three setup and with plenty of opportunities for epic comebacks, it's a game perfect for parties.

SpeedRunners is an outstanding party game. Its single-player content is on the thin side, but its competitive multiplayer scene is fun, challenging, and addictive. Underneath the game's clumsy exterior is an experience well worth sharing with friends at home and visitors online.

This review is based on a digital copy of SpeedRunners for the XOne, provided by the publisher.

Favorite party game is Just Dance. It gets lots of flack from gamers but with friends and family it's fun

Congrats, jason! Check your inbox for your code!

How are simplistic graphics a bad thing?

They don't have to be. Just like offline bots don't need to be a good thing. I try in the pros and cons columns to capture a few things that might turn on/turn off readers. It's up to you guys to decide how beneficial/detrimental each pro and con is based on your own priorities and expectations.

Favorite party game has to be Sing Party on Wii U. It's the only game that works when I try to convince Nigerian girls to play video games at a party