If Breath of the Wild is the Switch's War and Peace, then Disgaea 5 Complete is its Infinite Jest — expansive, lengthy, and encyclopedic in its knowledge. Disgaea 5 Complete is so full of content, both mandatory and optional, that it can compete with anything on Nintendo's newest system, or any other gaming platform for that matter. The number of characters to recruit, items to upgrade, and levels to beat is almost overwhelming at times. Fans of strategy RPGs will marvel at the complexities and intricacies of this latest Disgaea title, ported to Switch from PS4 with all DLC included.

Disgaea 5 takes place in the Netherworlds, a series of otherworldly planets each ruled by a powerful demon Overlord. When the Demon Emperor Void Dark begins a campaign to conquer the other Netherworlds, a group of rival Overlords band together in an unlikely alliance to stop him. 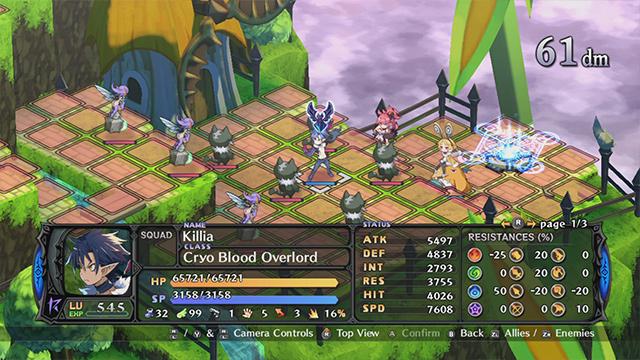 Storytelling and presentation are two of the highlights in Disgaea 5. NIS poured a lot of artistry, energy, and humor into the game's storyline and its characters. Most refreshingly, the developers refused to take themselves too seriously. Characters spout funny and ironic dialog and each story chapter is bookended with a "next time on..." cliffhanger typical of a daytime soap opera. Anyone expecting a deadly serious RPG will go home dissatisfied. This is the kind of game where the boss calls you a "jabroni."

This lighthearted facade hides a remarkably, sometimes overwhelmingly, complex series of RPG mechanics, systems, and menus. Players in Disgaea 5 will form a party and take part in turn-based battles against "the Lost," Void Dark's army, in a series of grid-based maps. That's the easy part. Between battles, players have the option to buy items, weapons, and armor; recruit new classes; add "innocents" to items; assign party members to unique squads; fight in randomized dungeons to level up items; and even submit bills in a demonic congress. 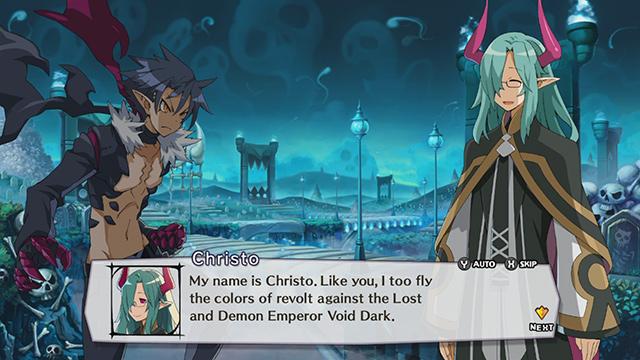 It's a lot to absorb, and thankfully NIS introduces each function gradually, with plenty of tutorials along the way. Moreover, many of these features are entirely optional, so players may choose to skip them altogether and focus on powering through the lengthy main campaign. For the RPG enthusiast who enjoys character building and the minutiae of party management, Disgaea 5 is a dream come true.

The most interesting and useful of Disgaea's systems is the character recruiter tool, which allows players, for a price, to bring into the alliance one of several classes. There are martial artists, brawlers, mages, maids, Prinnies (Disgaea's perpetually put-upon penguins), healers, and demons — all with their own stats, strengths, and weaknesses. By fulfilling the demands of certain quests, new types and classes will become available for recruitment. 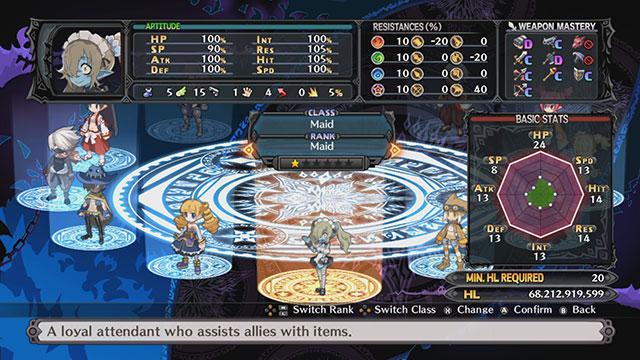 Bringing into the fold the right classes is essential for victory in the turn-based battles of Disgaea 5, which play out methodically and, ideally, with lots of strategic forethought. Players will move their party members across each grid to clear a map of enemies. Making the battle system more complex (and more rewarding) are several features, including combos, "geo effects," revenge mode, Magichange, and uneven terrain.

Disgaea 5 players will learn quickly that simple one-on-one attacks are relatively weak. By moving compatible characters into position next to each other, and then attacking, players might trigger a spectacular team attack. Similarly, characters who attack in succession will trigger a combo attack for heavy damage. 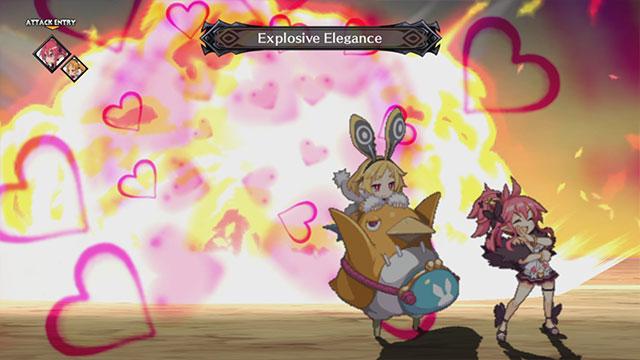 Early in the game, maps begin to feature uneven terrain and "geo effects." Players can navigate rocky terrain by ordering characters to throw others. Geo effects are more complicated. In some maps, there are colored gems that create unique battle conditions across corresponding colored squares. For example, enemy characters on yellow squares might get an attack buff or defensive bonus. It's up to each player to decide whether to seek out and destroy the gem first or attempt to power through the buffed enemy.

The two most intriguing features in battle are Magichange and revenge mode. Magichange enables Prinnies and other monsters to transform into weapons for a set number of turns, allowing them to be used by other characters. It's a clever way to grant a powerful weapon to a character in the thick of battle. 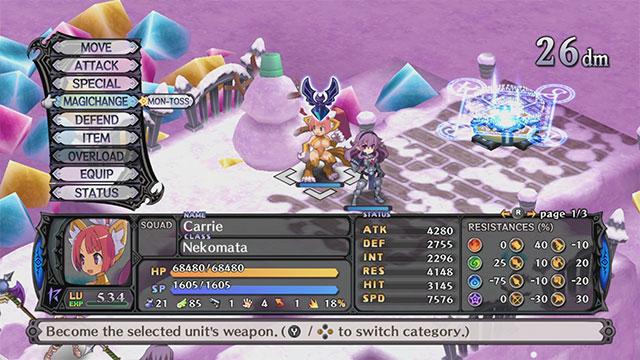 Revenge mode, new to this installment of Disgaea, offers up to characters new abilities and stat boosts. As characters take damage and watch their partners fall in battle, a revenge meter will fill up. Once full, characters enter revenge mode, where damage is reduced by 25% and all skills costs only a single special point, or SP.

Disgaea 5 is an enormously ambitious game in terms of content, systems, and battle mechanics. Like Breath of the Wild, it could be beaten in several dozen hours, or it could last three or four times as long. With a lengthy campaign, scores of side quests, lots of customization options, and tons of optional content, it's a title that will keep strategy RPG fans coming back for more. At times, the sheer amount of content and minutiae in the game can be staggering, but discerning fans can pick and choose which systems to explore and which to ignore.

This review is based on a digital copy of Disgaea Complete for the NS, provided by the publisher.

My first Disgaea and I'm loving the game. In fact, I'm loving it so much, that it just may ruin my semester =P

By far my favorite series from any genre.
I invite you all to also try the other games if possible, it just never gets old.

Is the reviewer and NIS trying hard to appeal to me? Not only did they add a maid class to the game, but the reviewer posted a screenshot of it, out of all the classes available.

Well, I already bought it before seeing this, so, ah... Jokes on you! Heh..

Looks like a great edition to the Switch library....

Currently playing it and at times, I do feel overwhelmed. Absolutely love the charm and humor, definitely. Great game!

Never got into this series. It looks like now is the time!

My best friend's ex-wife makes Bucks75/hr on the laptop. She has been unemployed for eight months but last month her income with big fat bonus was over Bucks9000 just working on the laptop for a few hours. Read more on this site.....
========== www.7jobspots.com

Looked the game on the PS4. This is the perfect game to utilize both console and handheld functions of the Switch. IMO playing on TV is always better, but in this game's case going to handheld will not be a big deal.

Very tempted to pick it up for switch. Had been getting the itch to play it again anyways.

Looks like a great game. I'll hopefully get it when it goes on sale