Slain: Back from Hell (PSV) - Review

As a kid my favorite video game series was Castlevania.  The satisfying blend of horror, adventure, combat, and music was difficult for other games to emulate and really captured my imagination.  Sadly, that series has been largely ignored by Konami in recent years.  Furthermore, every evolution Castlevania undergoes has been hit or miss.  For every brilliant entry such as a Symphony of the Night, there is at least one dud like Castlevania Judgement.  Fans of the Castlevanias of yesteryear can find solace in the fact that Slain: Back from Hell by Wolf Brew Games largely succeeds in satisfying that hardcore, old-school itch. 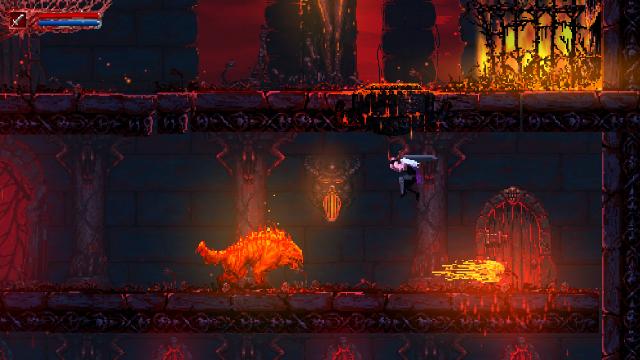 Slain! originally released back in March on Steam to a tepid response.  Wolf Brew Games however went back to work, fixing the game's issues and releasing a Back from Hell version to go along with its PlayStation 4 and Xbox One fall release.  And now, at long last, a PlayStation Vita version has been released that fits all of the game's blood, gore, and heavy metal into the palm of your hands.

What is immediately apparent in Slain: Back from Hell on the PlayStation Vita is that the gorgeous pixel art, along with the killer heavy metal soundtrack, made it through the portable conversion beautifully.  These two elements complement each other superbly and ensure players are presented with a combination that is distinct in today’s gaming landscape. There are some slowdowns when a lot is going on but overall it is a strong port.  The game's 16-bit pixelated graphics also provide plenty of unique areas to adventure through, however the heavy metal music gets a bit repetitive towards the end of the 5 or so hours it takes to complete Back from Hell. 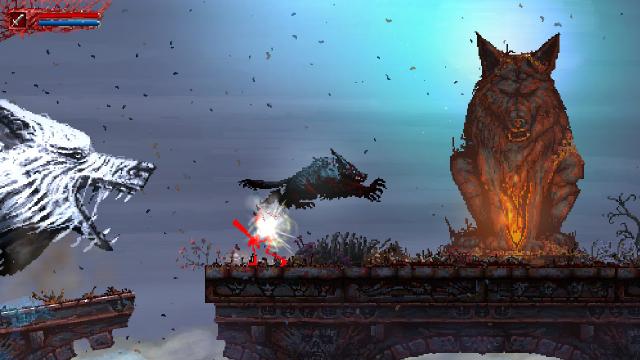 Although the game is relatively short, combat in Slain: Back from Hell provides a solid challenge to even the most grizzled Castlevania veterans.  Players take control of Bathoryn who is revived against his will to fight across six unique areas and overlords.  You will learn early on that death will be a constant companion to Bathoryn through his gothic adventure.

Even though death comes often and quickly, Back from Hell is rarely unfair.  Players must learn from their mistakes in both combat and platforming to be successful.  Checkpoints are generally fairly placed and reaching them, especially after a particularly difficult section, provides a powerful sense of accomplishment.  There were several sections and bosses that I felt were a bit too punishing but you just have to learn how to approach various enemies with different tactics and muster the patience required to overcome them.

To defeat the many enemies you will encounter, Bathoryn is armed with a relatively limited move-set, and this ensures that the gameplay in Back from Hell is decidedly old-school.  The sword is going to be your best friend and it will be augmented with fire and ice attacks as you progress.  Bathoryn will perform a basic combo as you tap the attack button in succession.  There is also a charged attack that requires precise timing.  You can use some of your mana to fire an energy projectile, or all of your mana to unleash a devastating blast attack that fills the screen.  You can block and counter as well as backdash to dodge.  Although this is all relatively basic, it's necessary to combine moves properly and learn how to use them judiciously in order to help Bathoryn on his quest.  Attempt to engage Back from Hell as a mindless button masher and you won’t get very far. 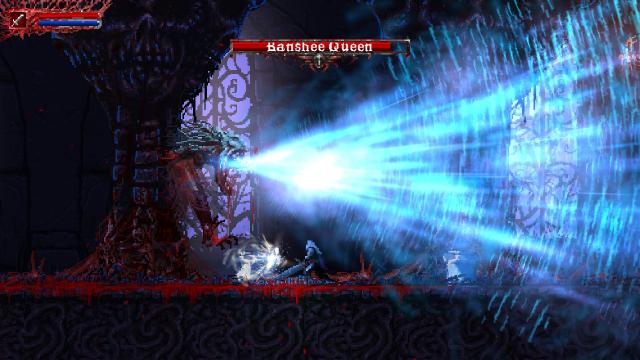 The combat is easy to learn but is consistently satisfying and challenging because any wrong move can spell disaster.  This gives it a level of depth that may be surprising to some players.  More modern conventions that have become entwined in the latest Castlevania games, such as leveling up, grinding, and unlocking abilities have been tossed aside in favour of a deliberate and pure action-adventure title that requires thinking and skill.

For better or worse, by intentionally focusing on a classic-style action title, Wolf Brew Games also made Back from Hell’s story somewhat thin.  The narrative is serviceable but really just seems like an excuse to allow Bathoryn to kill everything that gets in his way.  What stood out for me was the often hilarious dialogue Bathoryn constantly engaged in though; it was nice to see that the game didn’t take itself too seriously and made it clear that Wolf Brew Games just wants players to have fun. 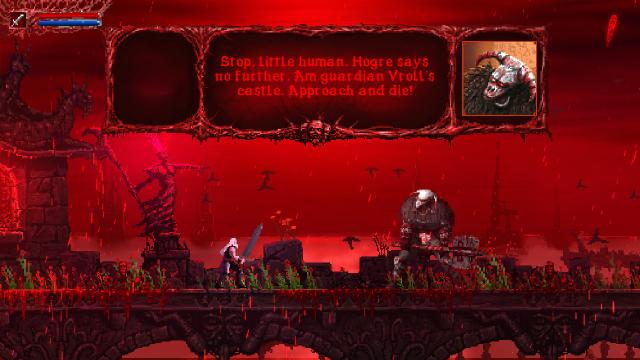 Overall Slain: Back from Hell succeeds as a retro Castlevania style game, which is something that is sorely missing from the industry today.  The blend of gory graphics and heavy metal music is fantastic and really stands out.  The gameplay is satisfying and deceptively deep, providing even veteran players with a hefty challenge, and although the story is forgettable and short, the dialogue is genuinely funny, providing plenty of great lines.  Fans who yearn for a strong, classic Castlevania experience will do well to consider Slain: Back from Hell.

This review is based on a digital copy of Slain: Back from Hell for the PSV, provided by the publisher.

Sounds like a good little castlevania game, looks nice too. Would imagine those Blacks and glowing Reds looked sexy on the Vita screen.

native to the Vita?

Ah, PC version with PS4 in the works. Will have to wait a bit to play it, although I'm guessing my GTX760 could manage to play that hah.

No slowdowns on Xbone. It's a fun game with great pixel art.