Eleven years ago, Killing Floor started off as a humble mod of Unreal Tournament 2004. Four years later it earned a standalone retail release, and just last month it received a sequel, Killing Floor 2. Like its predecessor, Killing Floor 2 is a co-operative zombie-slaying first-person shooter. While it suffers some of the same problems as the original, namely sub-par graphics and voice-acting, it shines in sound design and gameplay loops.

The story in Killing Floor 2 is simple and straightforward. A biotech company experiments with genetic manipulation producing grotesque zombified humans who break out and run amok across Europe. It's up to a ragtag group of survivors to cull the zombie horde and stay alive. If you're looking for a deep and cinematic journey into the post-apocalypse, best stick with The Last of Us or Gears of War 4. In Killing Floor 2, the story is just an excuse to blast more Zeds. 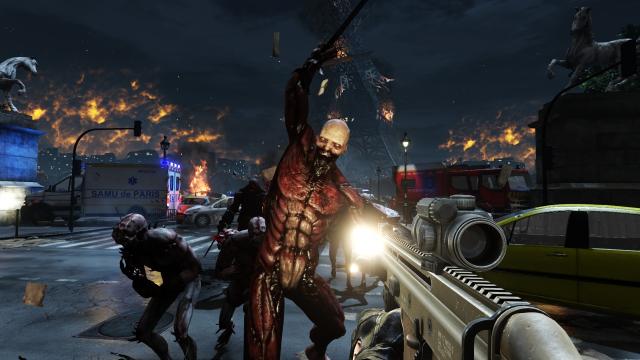 The story in Killing Floor 2 is immaterial because the gameplay loops and progression system are so fun and habit-forming. Before each match, which can be played solo or cooperatively online, players choose a giant map and a set number of enemy waves. Once players put down a given wave, they'll gain access to a supply point, where they can buy and sell a variety of weapons, ammo, grenades, and armor. They can also spend the remainder of the countdown period welding doors shut and setting up chokepoints. The final wave introduces a boss enemy.

This "lather, rinse, repeat" system is surprisingly rewarding and addictive. It's made all the more captivating by a class and perk system that encourages online fire teams to diversify and experiment with different combinations. At the beginning of a match, players choose one of ten difference classes, which include titles like "demolitions," "commando," and "field medic." Each class has unique boosts that can be combined in battle to great effect. The commando, for example, can mark invisible Zeds for other players. 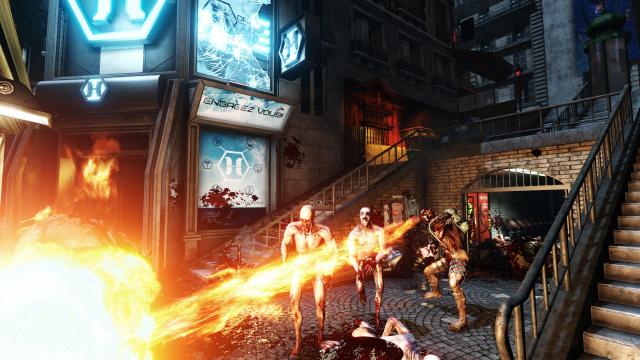 By using weapons specific to each class, players earn experience points and level up that class. Leveling up boosts base skill stats and, for every fifth level reached, players can enable one of two passive or active abilities. These upgrade systems extend greatly the replay value in Killing Floor 2. What could be a relatively simple "Horde" mode becomes that much more nuanced with the addition of perks, skill trees, and upgrades.

In addition to its PvE modes, Killing Floor 2 features an adversarial PvP mode where players control Zeds against a team of humans. Not unlike "Versus" in Left 4 Dead, this PvP mode allows players to use the special abilities of Zed. It's a fine secondary mode, but not nearly as fine-tuned and addictive as the base "survival" mode. 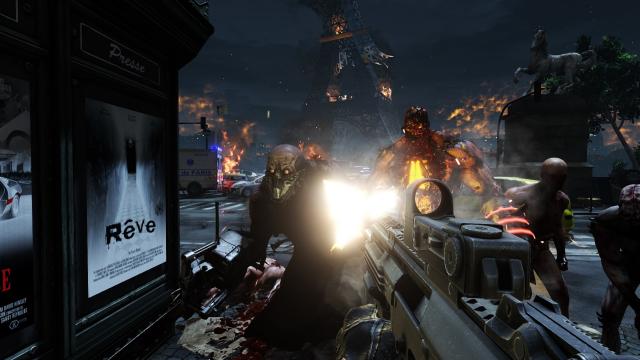 Using a heavily modified Unreal Engine 3, Killing Floor manages to nail the look and feel of the zombie apocalypse, even if the visual fidelity isn't nearly as impressive as other 2016 shooters. Still, there's plenty of blood and viscera on screen to keep fans happy. Voice acting in the game is decidedly average, but sound design is excellent. The groans, gasps, and revving chainsaws of approaching Zeds are the stuff of nightmares.

Killing Floor 2 isn't the prettiest or the most feature-rich shooter around. It doesn't have the polish of Overwatch or the mechanical audacity of Titanfall. Yet it's one of the more addictive shooters on the market today, one that consistently begs for "just one more match." There's always something to upgrade, something to unlock, or some new Zed to eliminate from the zombie apocalypse.

This review is based on a digital copy of Killing Floor 2 for the PS4, provided by the publisher.

Sounds great, I'm completely tapped out of cash from Black Friday but I'll definitely pick it up when it goes on sale again.