The Danish independent studio Playdead has been in business since 2006 and has released only two games. For many high-profile studios, that lack of output would sends fans into high alert. Yet, with Playdead, the fans are happy to wait. Its first game, 2010's Limbo, was a one-of-a-kind journey through a nightmare world filled with giant spiders, brain-altering worms, and some truly distressing death animations. Its spiritual sequel Inside, which borrows heavily from Limbo, is just as disturbing and, ultimately, just as extraordinary.

In addition to Limbo, from which the game takes its nightmarish landscape and monochrome palette, Inside finds inspiration in small-budget high-concept games like Valiant Hearts, The Swapper, and Never Alone. Make no mistake, though; Inside is a special and uniquely disturbing game. It is very much an evolved form of Limbo, in terms of graphics, presentation, animations, controls, and level design. 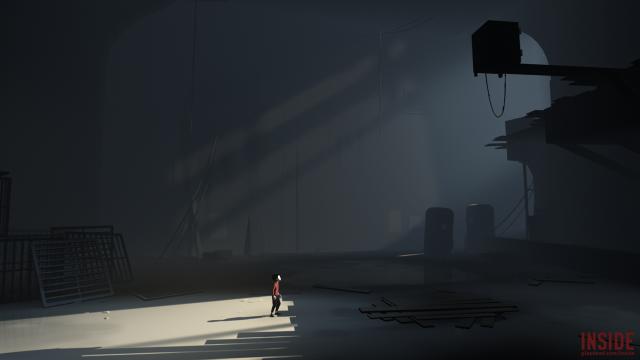 The story of Inside is best experienced first-hand, but a bit of scene-setting is in order. Players take control of a young boy stranded in the wilderness. Pursued by shadowy men, he escapes through rivers, farmland, and derelict buildings, along the way finding evidence of death, destruction, and sinister experimentation. There are plenty of twists, turns, and revelations that will make your head spin.

Like Limbo, Inside is a 2.5D puzzle platformer. Our hero can run, climb, and swim over and across a number of obstacles. He must use stealth to avoid searchlights and sentries, and must outrun or outsmart packs of vicious dogs. Commands are restricted to the bare necessities: run, jump, and interact. Inside is more about the journey and less about mechanically complex puzzles and scenarios. 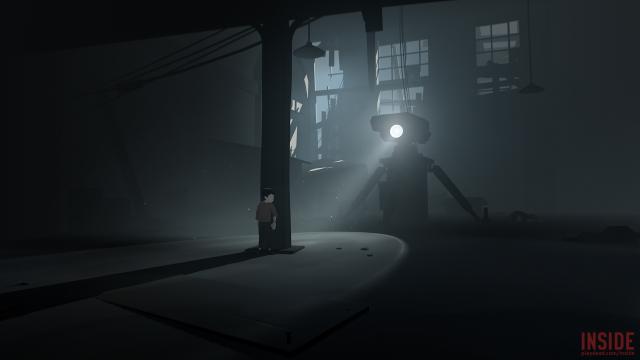 Therefore, the game will leave a powerful, perhaps permanent indentation on video game fans who prefer games rich in story and atmosphere. It might leave a less lasting impression on those craving a more interactive and challenging experience. While there are a handful of head-scratching puzzles - in particular the inventive "mind control" stumpers - the majority of puzzles are on the easy side. In the same way, platforming is mostly simple and straightforward.

In terms of ambience, however, Inside is spectacular. The mostly black-and-white backdrops and nightmarish imagery evoke feelings of fear, desperation, and, at times, hopelessness. Moreover, Playdead's use of sound is ingenious. The game is mostly silent - sometimes deafeningly so - but that silence is at random punctuated by the ominous click of a flashlight, the lonely drip of water, or our hero's own heavy breathing. This is the stuff bad dreams are made of. 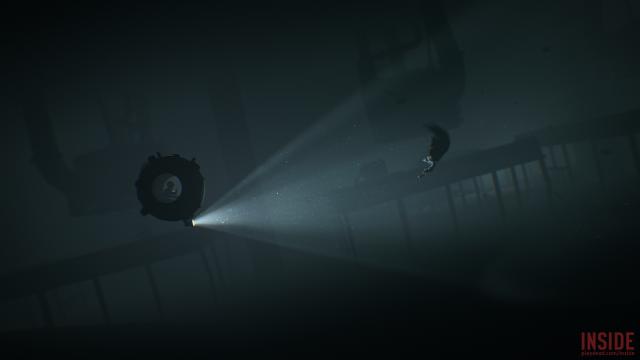 Despite some straightforward puzzles and undemanding platforming, Inside shines thanks to Playdead's masterful storytelling and focus on immersion. The game is scary, and heartpounding, and dripping in atmosphere. When it's not sending you into cardiac arrest, it's bending your mind with plot twists and challenging your reflexes and brain power with a series of platforming and puzzling challenges. In the end, lightning strikes twice for Playdead. Six years was worth the wait.

This review is based on a digital copy of Inside for the XOne, provided by the publisher.

Looking forward to playing this

Looks like the true LIMBO successor, gonna get this on PC when is out.

Got it and loving it. Great review!

A definite addition to my game library soon :).

I totally forgot this existed, might pick it up soon.

What an excellent console exclusive

What a weird game. Just got through beating it. Was not expecting the story to go that crazy. Damn near nightmare inducing. But I did enjoy it, and will play it again to get all the achievements.