The science fiction third-person shooter - Quantum Break - sold 267,147 units first week at retail, according to our estimates, which can be viewed on the VGChartz Global Weekly Chart for the week ending April 9th. 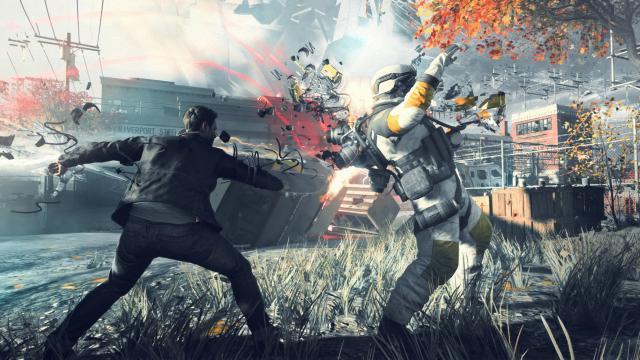 Easily cleared 300k with digital I assume. Excellent game. On my second play-through now to get the achievement completion. Hoping the legs are great.

Same can be said with every game but digutal is not bug enough to include it or else it would have been tracked.This idea that every Xbox game is selling more than usual because of digital is ridiculous lol.

@RexSad
Digital is excluded because VGChartz has no way of tracking it, not because it's too small to matter.

Honestly not THAT bad, thought it would do around 190k in USA and around 300k WW

But isn't NPD counts the whole month not the FW?

Do I believe that? I'm not sure. Feels lower than it should be. But I guess new IP, simultaneous PC release, digital sales, small install base outside the USA. Probably equals an all right start.

Actually seems like on par with Wii U game sales. Not too great. But decent. What was the budget?

Probably a Normal Triple A's Budget, i think that is between 40-80 Millions of US$.

It seems a little weird to me, that with several reports that the game top charts on France, Italy, Uk, and being above Dirt Rally in Spain, Dirt Rally (PS4) have outsold QB by a good margin in Europe.

I think is a little undertracked.

Not mind-blowing, but decent enough. Hope it has good legs, and congrats to remedy!

Why is this getting disliked? From 4 to 1.

Alan wake was better but Quantum Break was a good attempt at something really cool but overall I didn't like it as much as I hoped. Its good to see people like the concept, idea and story direction with the sales.

I hope future DLC will add something that was missing, an awesome ending.

Digital sales for this game should be good

Here's hoping this is good enough for now.

I think it should have been alot higher given the hype and that this is one of the few X1 exclusives out in a while.

I expected a lot more considering the Microsoft PR on it.

Doesn't include digital which only MS knows about. Probably Remedy

It is true though

Allan Wake didn't do all that better, so this is "above average" for Remedy...

That doesn't sound that great for what was probably a very expensive game. I'd love to know how much that live action production added to the bottom line.

Is this really good news? AAA game that has had years of hype? The numbers should be better than this.

It has already fallen extremely fast. I expect no more than 500, 000 total until it gets discounted and given away for free in the next Xbox multiple games bundle that will be available this fall.

Your gonna end up disappointed if you expect only 500k

Microsoft is actually revealing sales numbers for something...they must be feeling the Bern.

Isn't the numbers in the article based on VGC?

What else can you expect from the only xbox crowd. They don't support new IPs or great games. Look at ROTR and Sunset Overdrive all of which are completely lost on the xbox gaming community. I don't know why developers waste their time.

1 mil after discounts, bundles and promotional giveaways is no surprise. Not enough to earn a profitable return. Even Halo sales are down. So he is right in his perception. Other consoles have new games that smash this opening week or those other sales without a bundle, less promo and regular price.