There’s something strange about walking around another person's house while they’re not home. Whether this is because of the peculiarity of not knowing why everything is arranged the way it is, or simply knowing that this isn’t your own space, the whole experience is surreal and a little uncomfortable. Whilst you’re not meant to feel like a stranger in Sunset, the house that takes centre stage shifts and changes so frequently that you can’t help but feel you’re entering a strange and alien place each week. 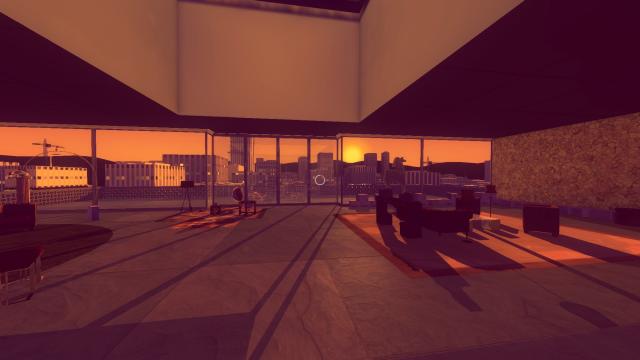 So what is Sunset? Well, for one, you could categorise it as a cleaning simulator, but this would be to ignore a large part of the game. In addition to completing traditional house chores, you’ll start to do additional things around the house that will have an impact on the owner of the apartment. The owner is Gabriel Ortega, a prominent figure in the local government. You play as Angela Burnes, an American college graduate who is stuck in a fictional Latin American country. Through Angela and the actions you perform around Ortega's house you indirectly communicate with him and attempt to help him as his country is torn apart by a rebellion.

Completing typical house chores composes the majority of the gameplay, and each week you're provided with a new note that details precisely what needs to be done during your elevator ride up to Ortega's apartment. This starts out fairly normally, with boxes needing to be unpacked, shirts ironed, and dishes washed, but your tasks soon change shape depending on certain choices you make around the apartment. Notes are left by Gabriel, either directly asking you a question or contemplating the decisions he’ll have to make, and it’s up to you to decide whether or not to reply to him, and whether your replies are romantic or neutral. 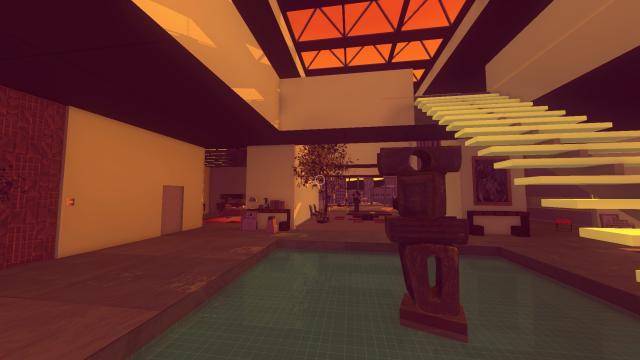 The choices you make determine which chores you're given. Meanwhile, Angela’s own internal monologue gives you more insight into the world outside of the apartment each week. This essentially gives you feedback on how the decisions you've made have affected the outside world. If you become more romantically involved with Gabriel then he will even start to leave confidential documents lying around, which can prove pivotal to the future of the nation.

The more good things you do towards Gabriel, the more he’ll fall in love with you, and this in turn affects what he does in government. Sometimes you'll feel conflicted about what to do, with various different factors coming in to play that will influence your decision, from Angela's own monologues, to her relationships with other characters. Regardless of how you decide to act, the choices you make will help shape the world of Sunset in a very real and tangible way. 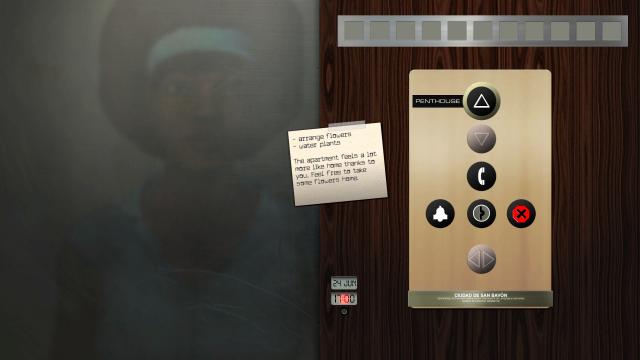 The name of the game - Sunset - is genius, and is based around the time of day that you clean Gabriel's flat: 5pm - 6pm. The fictional country of Anchuria is on the equator, so the time that the sun sets never changes, meaning the house starts off light and then slowly becomes darker as you work, before finally being dark when you leave. This all pays off in the graphical department, with gorgeous long shadows stretching across the hallways and lovely lighting from the decor around the house making the apartment feel “lived in”. Furniture moves around, either by your own hand or by others during the week, which helps to make the static apartment feel more dynamic.

Although events in the apartment can feel disconnected from the war at times, you get reminders here and there that there really is a war happening outside, with gunfire and bombs going off occasionally as you go about your job. And despite never actually meeting another human for the duration of the game (bar the reflection of your own character as you clean the house), you constantly get the feeling that this is a living, breathing world with human lives at risk.

Sunset is a fantastically polished example of an exploratory game which, despite taking place in a single location, conveys a brilliant story simply by making minor tweaks to the scene you occupy. The writing in Sunset is truly impressive, and Tale of Tales deserves some serious credit for bringing what at first appears to be a fairly mundane world to life. 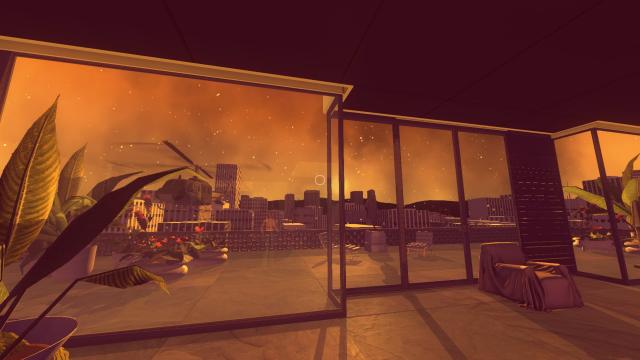 Sunset manages to make you care about characters and a story that you never directly interact with. Everything you learn about the outside world is indirect, and so it's a testament to the writing and direction provided by Tale of Tales that the game world and its characters are nonetheless highly believable. Sunset certainly has its niggles, and is rather slow and plodding compared to other indie titles, but this only slightly detracts from some impressive narrative accomplishments.