When you think 'RPG', Persona is one of the first words that comes to many a gamer’s mind. The Persona sub-series of Shin Megami Tensei captured the hearts of its players, with Persona 3 and 4 specifically being hailed as two of the greatest RPGs ever made. When you think 'Fighting games', you think Street Fighter, Mortal Kombat, Marvel vs Capcomand many others. But Atlus and Aksys want Persona to be the answer for that category, too. And so, Persona undergoes a genre shift from its safe RPG confines to the wide open world of fighting games with the release of Persona 4 Arena.

As you may already know, Persona 4’s story revolved around a mysterious world inside the TV, where Shadows ran amok and a person’s worst fears could be turned against them. From the moment you boot up Persona 4 Arena, it feels like one of those programs from the TV world, as the sponsors are introduced, and the P-1 Grand Prix tournament commercial plays, preparing you for battle. 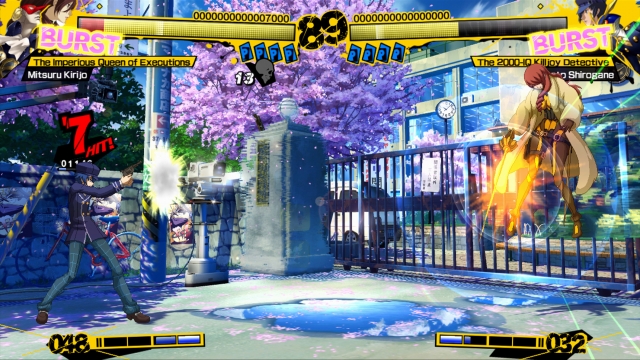 This is the Persona series' debut on the HD consoles, and it does not disappoint, looking bright and beautiful, showing off that vibrant anime style while capturing the feel of Yasogami High and the beauty (and sometimes horror) of the TV world. The character sprites are well animated, crisp and free-flowing; you might just stop and take in how great it looks once in a while even in the heat of battle. Character portraits used during story scenes are mostly taken from Persona 4and those look good too.

Persona 4 Arena has many resemblances to Aksys’ previous fighting game series, Guilty Gear and BlazBlue. It wouldn’t be too crazy to say this game is like a spin-off of those titles on the surface, but the deeper you dig, the more Arenabranches off from those games. Battles take place on the 2D plane and you have control over both your character and his/her Persona. Both the fighter and the Persona have weak and strong attack buttons, and both also use those buttons in their more powerful moves. While Persona are powerful, they have their own health. 4 arcana cards are on screen under the player’s health bar. If this reaches zero, the Persona is “broken” and will be unavailable for a few seconds, leaving you at a distinct disadvantage, so you can’t be reckless. While you play, a navigator will comment on the battle. Rise Kujikawa is the default navigator, but you can unlock more throughout the game. That said, their commentary is mostly pointless and they can be turned off in the options menu.

There are only 13 characters on the Persona 4 Arena roster, but what the game doesn't offer in quantity, it offers in quality. Each of the characters have well-developed movesets and combos, and (as of now) there is no dominant character that threatens to break the metagame like Meta Knight did to Super Smash Bros. Brawl. Many of the characters have special mechanics that need to be accounted for while playing as them. For example, Aigis has a limited number of bullets per round, Naoto has a Fate Gauge that, when it hits zero, allows Hamaon or Mudoon to instant kill, the power of Labrys’s axe changes depending on its color, and so on. Characters can also inflict statuses, such as Shock which cuts movement, Panic which reverses directions, and Poison which saps HP from its victim. These elements, plus the wide variety of combos, special moves, and the flashy but hard-to-hit Instant Kill moves add a lot of strategy to every fight. 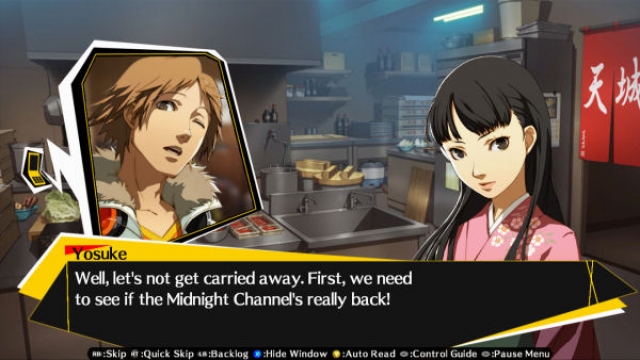 Story is not something many people play fighting games for; they're more interested in the fighting than the reason for the fighting. But Persona 4 Arena has an important story to tell, continuing the events of Persona 4. Those who do not want Persona 3 or 4 spoiled would be wise to play those games first, as some key elements of those games are mentioned throughout the Story mode. If that doesn't bother you, you can still get through, but you’ll miss out on some of the references to past games and on plenty of humorous jokes based on them.

It’s Golden Week, and the main character from Persona 4 (known in Arena as Yu Narukami) is returning to Inaba for the holiday. But just before he returns, a mysterious program airs on the Midnight Channel, showing Yu and the rest of his friends in a fighting tournament called the P-1 Grand Prix, with degrading nicknames, run by their very own lovable mascot friend, Teddie! Wanting to know what the fuss is about, the team enters the TV and quickly realizes they’ve gotten much more than they bargained for.

You can choose from any of the playable characters to go through story mode, but only some are available at the beginning, with the rest being unlocked later on. The story is presented mainly in visual novel style, with each character’s thoughts displaying as text on screen interspersed with dialogue from the characters atop still pictures of whatever action is occurring at that moment. After key moments, bookmarks can be created to save progress. Atlus promised a long story (30-40 hours) and they weren’t lying; there is plenty of content here to read through. There are some occasional cut scenes, but it feels like there should be more; one particular scene plays like an action thriller movie but is done only in narrative form, with the occasional interruption from a bystander who spouts pointless interludes. Occasionally there are battles, but most of your time will be spent watching the story unfold. If you can’t get into what’s happening, Story mode will feel like a drag.

One issue that comes up in story mode is that many of the characters are going through the same events as others, which means playing through every character can be repetitive. It’s not required to play as everyone, so if you grow tired of the same events from the Investigation team, you can skip over Yukiko and go play as Akihiko, for instance. When you reach the meat of the story, you’re rewarded with an excellent, moving tale, but the repetition before and after can be a problem. Story mode also has lasting implications that could very well pop up in a future Persona title. Ultimately, it’s still a good story, but perhaps one that would have been better as part of a mainline title than shoehorned into a VN/fighting mix. 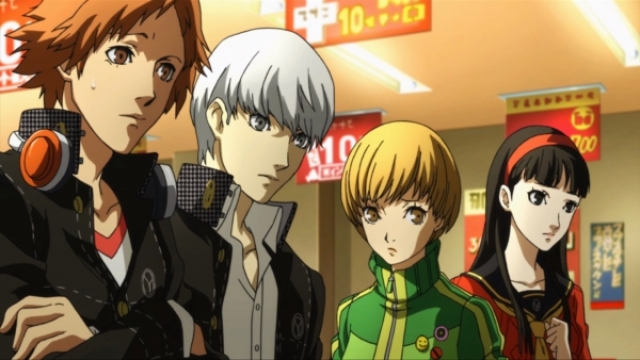 There’s plenty more to Persona 4 Arena than the story, of course. To improve at the game, it offers Lesson, Training, and Challenge modes. Lesson mode teaches you the bare basic movements and attacks of the game, while Challenge mode asks you to perform various moves and combos, ranging from easy to difficult. Mastering them is bound to make you good at the game. Training mode lets you practice everything you learned against a hapless dummy.

Arena is fully voice acted, with both Japanese and English available. Most of the English voice actors return from Persona 4 and they again do a solid job with the dubbing. The music is full of remixes of previous Persona series songs, putting a new spin on some old songs while making them feel more at home in a fighting game. Heartful Cry was a much more somber song in Persona 3 but in Arena, it's become a great song to backdrop your beatdown of the enemy. Other tunes from the series have been changed in a similar way.

Ready to start playing? Arcade mode is much like any traditional fighter; you face a series of opponents leading up to the final boss. Persona 4 Arena’s Arcade mode also boils down the main conflict of Story mode to its base elements, shown in quick conversational scenes between each fight. Score Attack goes a step further and challenges you to get the best score possible as you lay waste to your foes. 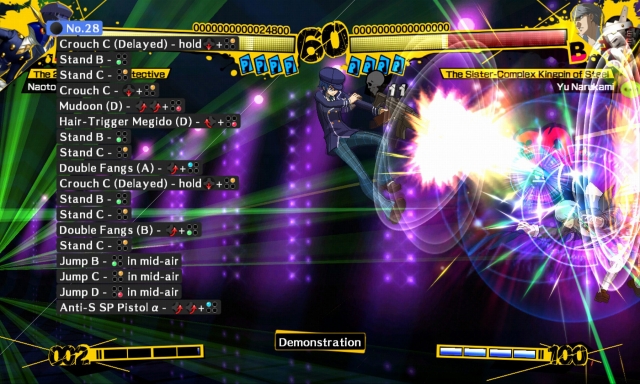 Online play is great. There was some occasional lag, but most of my matches were lag-free and without incident (the 360 version had netcode problems at release, but a recent patch has corrected the issues). Persona 4 Arena has a leveling system that grants you EXP after battles, including bonuses for flashier moves and SP/Instant Kill finishers. You can set your own title for online play; make it as awesome, serious, or silly as you want! More words for use in titles are unlocked as you play the game. You can play ranked matches with anyone around the world, or you can choose to play Player Matches, which are unranked but let you change the rules. This way you can create lobbies of up to 8 people, choose to make them private to only your friends, and edit the settings to change things such as match time, number of wins needed, and who in the lobby gets to play in the next match. Those who aren’t playing are able to spectate the current action. Matches under the normal rules are quick affairs, so those who are waiting will not have to sit out for long. Replays of your matches can also be saved and viewed later in the Theater.

There are plenty of things to unlock in Persona 4 Arena. All of the characters are available from the start (other than in Story mode) but new navigators, titles, trophies/achievements, gallery items and so on will keep completionists busy beyond the 20 or so hours put into Story mode. There is also plenty of DLC available, such as new costumes and glasses. 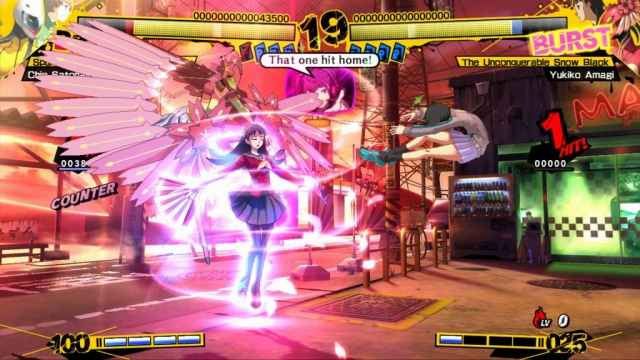 It’s always a risk when a developer takes their franchise into a whole new realm, especially one which is so far removed from that which fans are used to. But the union of Atlus and Aksys has managed to make that process seem easy, as Persona 4 Arena looks and feels like it was always a fighting series. This is a game that has managed to link two very different audiences together and make them both happy. Persona 4 Arena may be a spin-off of the Persona franchise, but it has ensured that it will make its mark among fighting gamers, as well as anyone who gets their hands on this title.

This review is based on a retail copy of Persona 4 Arena for the PlayStation 3, provided by the publisher.