A number of large game series are getting iPhone ports to capitalise on the growing smartphone market, but it’s still relatively rare for a game to go the other way. Tiny Troopers is one of the few examples I have seen, and it handles the transition reasonably well.

Tiny Troopers is a top-down mouse-controlled shooter set in Generic Middle Eastern War #73. You use your mouse to lead a handful of little chibi soldiers around a battlefield (together; they cannot be individually controlled), firing at enemies with the right mouse button. Your standard ammunition is inexhaustible, but some more powerful explosive weapons – grenades, rocket launchers and airstrikes – can be picked up or purchased. 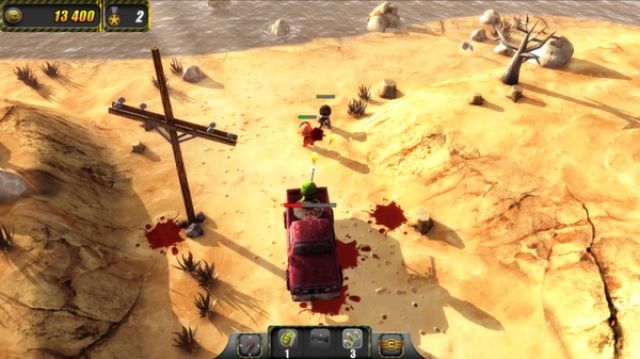 Mercifully, this purchasing does not involve microtransactions. All of the currency you spend is earned in-game as command points through pick-ups, some just found lying around; others dropped by dying enemies. You can purchase items at any time in the game by opening up the support menu and waiting a few seconds for the supplies to be airdropped. As well as explosives, you can buy health packs or a radar improvement that shows all enemies on the map, rather than just objectives, buildings and vehicles.

Before each mission starts, you have the ability to purchase a specialist, who lasts only one mission but provides a unique advantage – for example, healing your teammates or providing you with three extra rockets at the beginning of the mission – as well as being an extra hand on deck. Special medal pickups also allow you to permanently strengthen your soldiers.

The soldiers themselves gain experience for each mission they survive, but if a soldier dies, he is gone for good and replaced with a new recruit of the lowest level, or a slightly higher level determined by how many medals you have collected. The number of soldiers you are granted varies from level to level, but no soldier will disappear unless he is killed. This is actually quite a refreshing game mechanic. It gives a sense of urgency to what would otherwise be an excessively laid-back game; you will go into a near panic when your Lieutenant is on the verge of dying, even though to my eye there wasn’t a great deal of difference between the ranks (likely greater damage dealt by firing). 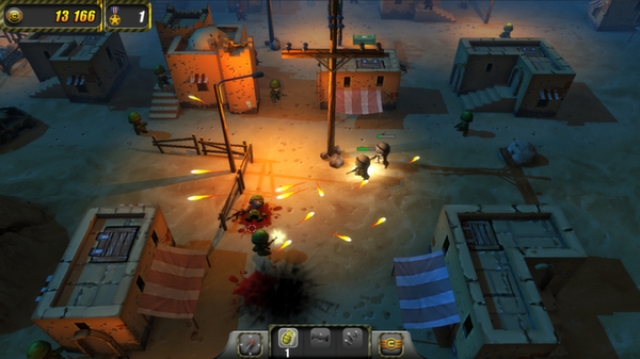 Unfortunately, walking around the map (the soldiers do not move very quickly) and collecting medals and dog tags (which earn you command points) is laborious and dull. You do need to purchase the radar upgrade to have any chance at all of spotting them, and then you need a fair bit of patience to go to the effort of picking them up.

There isn’t a huge amount of variety between missions. It is usually some variant or combination of “kill all enemies”, “destroy all buildings” or “destroy all vehicles”. There are 30 missions in total, split into three distinct sections for some reason which is not immediately apparent – nothing major really changes between these sections. Any mission you have completed can be replayed to earn more points to spend on upgrades, without risking your higher-ranking soldiers in the later missions. Each mission can be played in one of three different difficulties, but towards the end of the game all three of these pose a significant challenge.

Tiny Troopers looks surprisingly good for a low-budget downloadable game. The character models could use some work, but the ground and water textures are especially impressive, and the foliage has an appealing cartoony feel. Light filters into rays through the trees, and casts clear shadows with no jagged edges to speak of. Tiny Troopers really highlights the advantageous effects of using a simple art style on the aesthetics of a game. 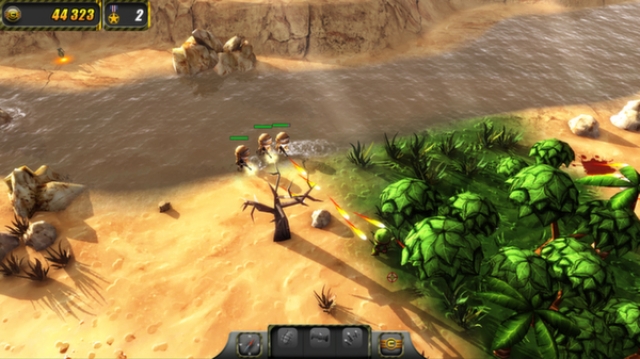 A military tune reminiscent of Modern Warfare plays on the main menu, and a joyous little ditty accompanies a victory dance at the end of each level, but otherwise no music plays, which is a shame. The gunfire sounds decent enough, but the dying squeals of your enemies and your own soldiers’ bragging can get tiresome. In a nice touch, you can hear subtle artillery fire and machine guns in the background at all times, which helps create the sense that you really are in a warzone.

Tiny Troopers does seem like a game more suited to an on-the-move platform like smartphones than the PC. It’s not particularly deep - it’s fun in small bursts but gets repetitive quickly. The production values are high, but it’s a short game, at perhaps two and a half to three hours, and on Steam, it shares its $10 price tag (ten times the iPhone price) with all manner of popular fully-fledged games on sale. It’s good fun, but it’s nothing spectacular. If you do like top-down shooters and cartoony games in general, give it a try.