When it was released back in 1999, Age of Empires II was one of the finest real-time strategy games ever made. It is still to be found on many all-time top 50 game lists, including my own. Indeed, I put it behind only Warcraft III and AoEII’s half-sibling Age of Mythology on my list of the greatest RTS titles of all time. But times change, and standards and genres change with them. So does Age of Empires II retain its crown? In short, no, it does not. 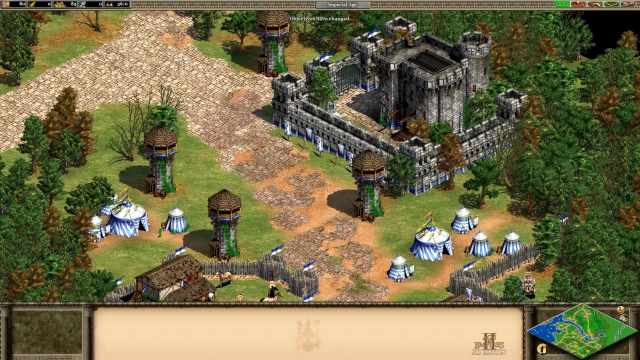 In case you missed out 14 years ago, Age of Empires II is set around the turn of the second millennium (that is, the year 1000AD), and specifically deals with the conflicts within Europe at the time, though also heading east for some Crusader action. The Conquerors (included in the HD Edition), the game’s only expansion, extended the game west across the Atlantic, adding in some races from the Americas as well as some more colonial races. There are five campaigns in the original game, and four more added by the expansion, each of these dealing with a different civilization’s conflicts, from Joan of Arc’s war against Britain to Saladin’s victory in the crusades, and the Aztecs’ futile last stand against the Spanish Conquistadors.

Unfortunately, the campaigns really aren’t very good. Most of them begin with a dreary escort quest where the main character and a couple of guards amble across a map and defeat any enemies they see. Once you are actually in combat, AoEII doesn’t really have any strategy to speak of, so all you really do is right click on the enemies and watch what amounts to a brief cutscene. Base building shows up later in the campaigns, but for some reason your technologies and progression are limited so that you are playing some sort of demo version of the game. These lacklustre imitations of the skirmish mode are separated by some rather nice historical segments, usually narrated by some sort of foot soldier, and told through hand-drawn stills, but you are honestly better off watching them on the internet or using the “Black Death” cheat to get through the dreary, repetitious levels.

The core Skirmish gameplay is that of a base-building RTS: in short, you create villagers from your Town Centre, set them to gather resources and build structures, advance through the ages when you have gathered and built enough, and slowly build up an army to conquer the rest of the world. A handful of other victories are possible: you can use your Monks (notorious for yodelling and capturing enemy units and buildings) to capture all relics in the game, or build a Wonder (only available in the final age, and requiring inordinate amounts of resources and time) and keeping it standing for a set amount of time. 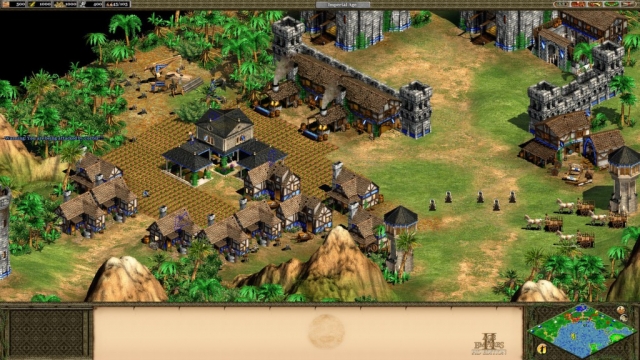 Age of Empires II has an enormous number of races to choose from – 18 in total – but these are all very similar. All use the same kinds of units (with a couple of unique units thrown in), build the same buildings, research almost the same technologies, advance through the same ages and generally have very similar strategies. This is in stark contrast to most modern RTS, which have a far smaller number of clearly distinct civilizations. It means that AoEII’s civilizations struggle a little bit to gain their own identities. Even those differences that do exist seem like arbitrarily chosen advantages rather than anything resembling a single playstyle: what do the Saracens’ reduced market trade costs have to do with their increased galley attack speed? It's not unheard of in strategy games - Civilization uses a similar system - but it seems particularly clumsy here.

The gameplay itself is still charming in a way, but I do have to wonder how much of this is just nostalgia from my decade-old memories of building a Castle next to the enemy town and spamming Petards to destroy their fortifications, and how much of it is actually to do with AoEII’s quality as compared to modern games. On consideration, it’s mostly the former. For one, the pathfinding is awful, and your units often walk in enormous loops around obstacles when a clear path is available, and this isn't helped by the fact that they can only really move in eight directions. The combat AI is similarly rudimentary, and your units will often just stand there for a few seconds while archers pepper them with arrows.

Furthermore, at no point does it really become exciting. When you are at the very pinnacle of your empire, you go from building a swordsman to a slightly more powerful swordsman; or from an Onager (a kind of catapult) to a Siege Onager (a slightly more powerful catapult). The Castle is nice, but that’s available from the third of the four ages. Perhaps I’ve just been spoiled by the heavy sci-fi bent of modern RTS, but Champions and Arbalests just don’t seem very exciting anymore. In retrospect, Age of Mythology was far better at making the endgame more interesting, so hopefully that can get the HD treatment as well.

There is a reason I have called it Age of Empires II throughout this review: almost literally nothing has actually been changed. I understand that the game is called “HD Edition”, but I was hoping that would mean something beyond “we took this fourteen year old game, redrew some of the textures, increased the resolution and sold it for the amount you would pay for a six month old game”. The animations, though mightily impressive back in 1999, now just look absurd and off-putting. You have no ability to zoom or rotate the camera.

They did also integrate the multiplayer with Steamworks, which has somehow made the lag considerably worse than that of the original version: it was not unusual for me to see a good 4-5 seconds of lag between giving a command and seeing it executed on screen, which is unforgiveable and, indeed, unheard-of, in any real-time game. Moreover, the matchmaking doesn’t work very well at all: it encourages you to cancel and start again if you haven’t found anything within 15 seconds, but if I followed this rule I would never find a game; it is usually closer to the two minute mark. There is a nice range of options regarding maps, gameplay and victory conditions, but the matchmaking lobby is essentially just a lucky draw because you aren’t allowed to specify any of these when finding a game. 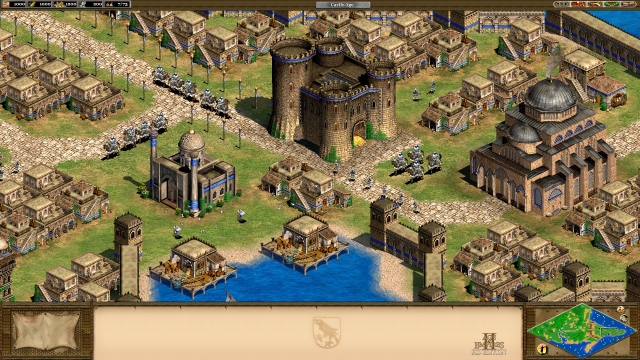 Hopefully the technical problems are simply launch issues and will be resolved over time, but it is my duty to review a game as it is at the moment, and at the moment it’s really not very well polished at all. Regardless, multiplayer is still somewhat enjoyable, more than can be said for the single player campaigns.

The support for the Steam Workshop is a nice sentiment, though mods aren’t really part of the game, and allowing users to change your game doesn’t make up for developing one that isn’t terribly good. In any case, the majority of mods currently available bafflingly revolve around the idea of reverting textures to their original 1999 versions, when the improved textures are one of a bare handful of things I can point to as clearly superior in this 2013 updated version. I would go so far as to say that they actually look rather nice.

One thing has stood the test of time: the soundtrack. It still fits the mood of the game perfectly and is a lovely accompaniment to the old-school sound-effects, which surprisingly don’t grate at all. I also enjoy the exclamations in each unit’s native language when you give them orders. Both of these things, however, were present in the original game, and have not been changed in the slightest.

In conclusion, taking an extraordinary title released fourteen years ago and releasing it entirely intact with nothing more than a very slight graphical update isn’t really a formula for success. It is a testament to how fantastic Age of Empires II was when it launched that it is even remotely playable today, but it’s unreasonable to expect it to compete with games that have had AoEII itself as inspiration, as well as years of refinement and vastly superior technology.

If you didn’t play Age of Empires II back in the day, playing this will make you wonder what on earth all the fuss was about. That doesn’t lessen the game’s achievement all those years ago, but it does significantly lessen my ability to recommend to you a reselling of that game. If you played Age of Empires II a decade ago and haven’t touched it since, it could well be a better decision to leave your nostalgic perception of it intact. If you have been playing it regularly for years, I cannot in good conscience recommend that you spend money on this edition; it doesn’t change nearly enough for that to be justifiable.

Age of Empires II is not bad, and it still has its moments. It’s just that the real-time strategy games that have had the benefit of learning from it and other games of its era are significantly better in every way. If you’ve enjoyed some of those games and want to try out one of their great forefathers, then this HD Edition is probably your best shot at doing so. If you are nostalgic for it and really want to give it a try, then again, there is no better way to do so. But in either case, prepare to be a little bit disappointed at how much difference the years have made.

This review is based on a Steam copy of Age of Empires II: HD Edition for the PC.