Far Cry 3: Blood Dragon was initially announced on April Fools’ Day, and the absurdity of the concept led many people to think that it was a joke. As it turns out, it is a joke. That’s not a statement on its quality, but rather on its intent. It exists to parody the entire decade between 1980 and 1990, as well as action games in general. Here, as in many things, it is hit and miss.

At its core, this is still Far Cry 3. You are a man sent to a remote location filled with vegetation that contains a handful of story missions, a number of outposts to be liberated, and a greater number of collectibles to be found. You are equipped with a partially recharging health bar and a set of guns and explosives, as well as a combat knife and the training required to use it. Because of this base similarity, you never really forget that you are playing Far Cry 3, despite the numerous changes. 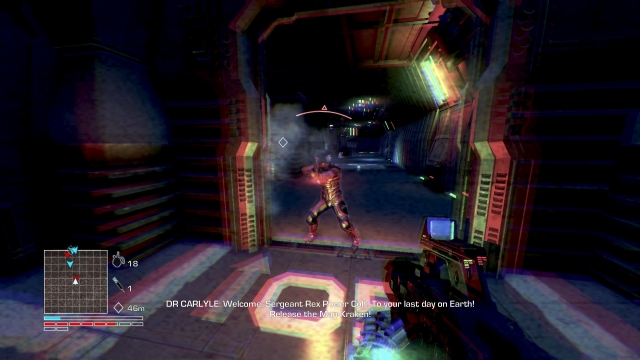 The most immediately obvious change is in the setting. Instead of a beautiful, vibrant and green island paradise, you find yourself in some sort of hideous orange-black dystopian nightmare. You are Rex “Power” Colt, elite cyborg soldier, and you must stop the dastardly Colonel Sloan from unleashing a biological weapon on all of humanity by running through a series of labyrinths, gunning down futuristic-looking soldiers. If this sounds familiar, it’s because you’ve seen an action movie (any action movie) from the 1980s, or played one of the games following that philosophy from the early 90s.

The game’s cutscenes are in that style that is a curious blend of still images and subtle animation. They are fully voiced as well as subtitled, and even go so far as to include the awkward pauses between lines of dialogue that permeated games of that sort, though it makes these extraordinarily annoying by extending some of them to be 15-20 seconds long, in what I can only assume is some sort of failed attempt at a parody.

Much of the game’s parody, on the other hand, works quite well. Rex’s one-liners are endearingly corny, and the game’s frequent self-reference is charming. The story, however, is too stereotypical to be interesting and not stereotypical enough to be funny in its own right. Humour is, of course, subjective, but I felt like there was a definite range in the game from “not even remotely amusing” to “actually pretty hilarious”, the latter including a statement by an enemy AI that grenades will only explode if you say one of the activation phrases, “grenade out” or “eat this.” To summarise, it’s funny, but not nearly as funny as it thinks it is. 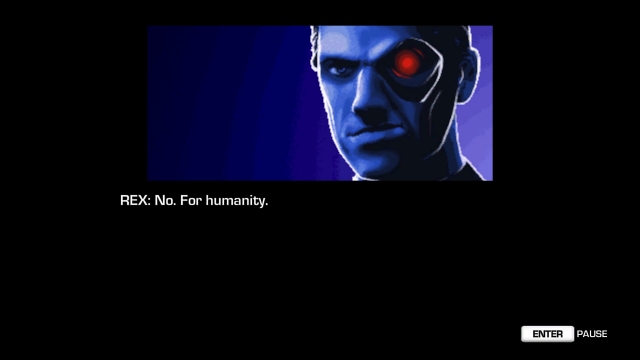 The gameplay has been tweaked in a few minor ways, and some not so minor. Enemies look different to, but act exactly the same as, the enemies from Far Cry 3. This is generally achieved by encasing them in futuristic-looking armour with glowing eyes. It felt like they took more of a beating than the enemies from the vanilla game, but that could just be a mental illusion caused by their appearances. Rex runs faster than Jason Brody, takes no fall damage and can breathe underwater indefinitely. This serves to make the game faster-paced and even more action-packed than the original, which can be a very good thing. He learns many of the same skills as well, but picks these up through linear progression rather than choice (each level bestowing either a health bar improvement or a new skill), and begins the game with a handful of them. There is far less weapon variety here than in the main game, with only one weapon from each category appearing, and a few categories, such as the explosive launcher, missing entirely. This is, however, to be expected given the game’s smaller scope and shorter campaign. One new and highly effective weapon is gained right at the end of the story, and can subsequently be used on the main map.

And then there are the blood dragons themselves. These feel like a clumsy attempt at providing something similar to the Big Daddies of BioShock: a somewhat neutral and somewhat hostile being that can be exploited to give you the upper hand. They are extraordinarily annoying to take down, and the moments that require you to interact with them (by throwing the cyber spheres that you pick up from enemy corpses) are among the worst in the game because of how fickle and annoying the beasts themselves are, which is a shame, because these moments are really the furthest that Blood Dragon ever gets from the original.

None of this is helped by the fact that the visual design is atrocious. The lush greenery and bright colours of Far Cry 3 are replaced by a sort of orange haze through which it’s impossible to really see or appreciate anything. The changed setting is no excuse, because plenty of sci-fi games have excellent visual design. I could have sworn that the game ran more choppily as well, presumably in homage to the first-person shooters that it is trying to caricature. It looks like either a low-budget indie shooter or something from the mid-1990s, and the fact that this is clearly intentional does not change the fact that it is awful. 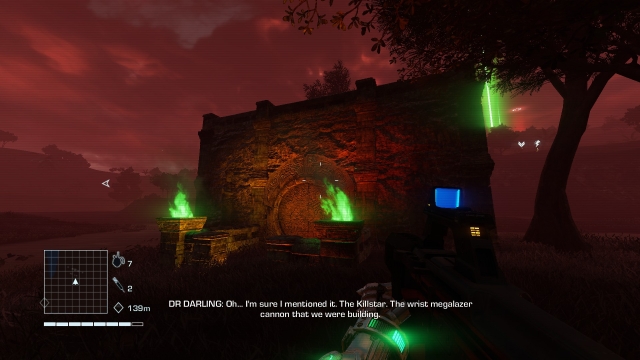 You might think that a game like this might have trouble taking its story at all seriously, but quite the opposite is true. It takes its story far too seriously, even going so far as to throw in the tragic loss of a friend and the unlikely romance that are in literally every action story ever written. These aren’t jokes, or parodies, or caricatures, they are just clichés. It’s only when the game pokes fun at itself and its source material that the plot can be forgiven for being so awful.

The game includes fifteen outposts to be liberated, and each of these gives you access to a hostage rescue mission and a hunting mission, as in the main game, each of which unlocks a new add-on for one of your weapons. The hostage rescues are very difficult, because the game isn’t remotely designed for stealth, so you have to run in and kill every enemy before one of them manages to terminate the hostage. The hunting missions are a little bit rubbish because half the fun of them was always in pretending to be an actual hunter, which is difficult when you’re shooting at an orange blaze in a slightly dimmer orange blur. There are also a number of collectibles, such as VHS cassettes, strewn around the map. Finding all of these unlocks a secret video. Completing just the main story will take you just shy of three hours, with perhaps another hour and a half to two hours available if you desire 100% completion.

In the end, it’s fun and amusing at points, but it’s not as good as I was hoping it would be, and it’s certainly nowhere near as excellent as the main game. For the most part, it just feels kind of lifeless and unexciting, and when you’re saying that about an over-the-top 80s-style action game, you know there’s something wrong. I can only wholeheartedly recommend this to people who really, really adore that time period and its design decisions, and who didn’t like Far Cry 3 enough to regret that the first notable expansion is this. That said, it is quirky and more than functional, so if you want a blast from the past, it’s worth a try.

This review is based on a purchased Steam copy of Far Cry 3: Blood Dragon for PC.