I would like to apologize up front, but I do not like Hotline Miami. I know that's an unpopular opinion, but having just finished it I can't really think of that much good to say about it, at least not enough to balance out the things I didn't enjoy. I'd like to think that maybe I'm just not the target audience for such a hyper-violent game, but I've never had a problem with even the most violent games that, say, Rockstar has put out. I'm not easily offended, I'm a fan of the retro style, and I enjoy my twin stick shooters, so what is it about Hotline Miami that grinds my gears so much? Well, it's a little bit of everything, really. While it does have some forgiving aspects, they're only there to make up for the needless repetition it puts you through, and I got bored only an hour into the game. 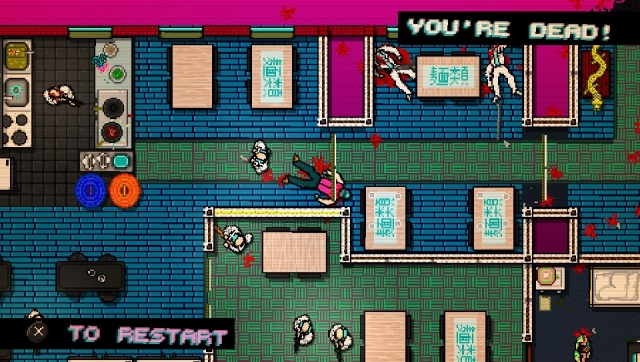 Hotline Miami is a retro styled, hyper-violent, top down, melee and ranged weapon based twin stick shooter set in 1989 Miami. You play as an unnamed prot... wait, no, you are definitely not a protagonist. If anything you're one of the cruelest, meanest, most despicable player avatars to ever come out of the medium. Instead, I'll call him the main character, and that's as generous as I feel I can be. You play as an unnamed main character who has been getting a series of cryptic messages on his answering machine instructing him to wipe out random groups of gangs. Interspersed throughout the story are a set of animal-masked antagonists threatening you and warning you of your own impending demise. From there, you set out in your DeLorean to various bars, clubs, and other social ventures where you must eradicate all enemies, often in grotesque, insanely violent ways. Since that's not quite sadistic enough, you also get to equip one of a large set of those animal masks to give you specific bonuses like increased speed, better melee performance, bigger ammo clips, lethal throws or door kicks. One even lets you see hidden items. You can unlock them by playing through the levels or finding them hidden throughout the game.

The controls on the Vita and PS3 are pretty simple. Left stick moves, right stick aims, R attacks, L throws, and X activates items or executes downed enemies. Simple in theory, at any rate, but given the pace of the game it's actually a counter intuitive control scheme, especially when you're trying to drag the screen to look a long way or toggle auto-aim. The issue is that, while the twin sticks are quite good, aiming at enemies to throw a knife or shoot from afar is imprecise. The controls on PC were damn near perfect, but on these controllers it's not as good, and that leads to many unnecessary deaths that will result in higher blood pressure. 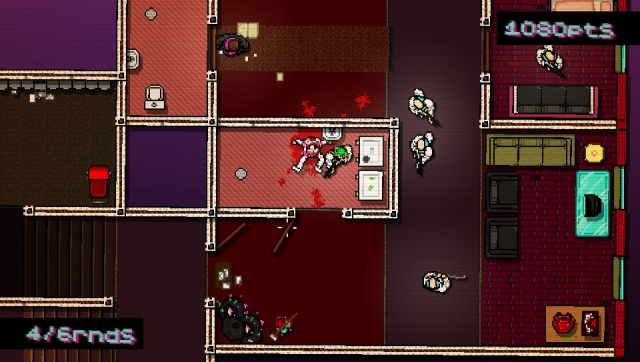 The real problem here is that Hotline Miami is a game that relies almost entirely on trial and error, costing you many, many lives (which you luckily have an unlimited pool of). You're not expected to be able to blow through each stage in one try. No, you're expected to die many unfair deaths until you know precisely where all the enemies are and how to kill them (preferably in the most brutal way possible, because bloodlust and creativity are rewarded with higher scores). Trial and error based gameplay isn't in and of itself isn't necessarily a problem. For example, you immediately return to action after dying, the level having been reset in a split second to ensure that the thousand or more deaths you inevitably will suffer aren't really all that punishing. I just wish that there was a bit more skill involved and not so much tenacity and bull-headed stubbornness.

However, there's something deeply unpleasant about doing the same thing a dozen times in rapid succession, only to be presented with a slightly different outcome every time. The pre-chapter loading screen informs you that enemies are predictable, but they are not. Sometimes they are attracted to your gunshots, sometimes they are not. Sometimes they see you coming from behind, sometimes they do not. Sometimes they hold their position, other times they move in an erratic pattern. Because of this, even when you're sure you've mastered a stage and know precisely how to speed-run through it from beginning to end without alerting a guard, you will inevitably be seen by that one enemy you didn't fully kill for some inexplicable reason. What's worse is that if enemies so much as look at you, you are blown across the room, your brains splattered all over the floor and wall. 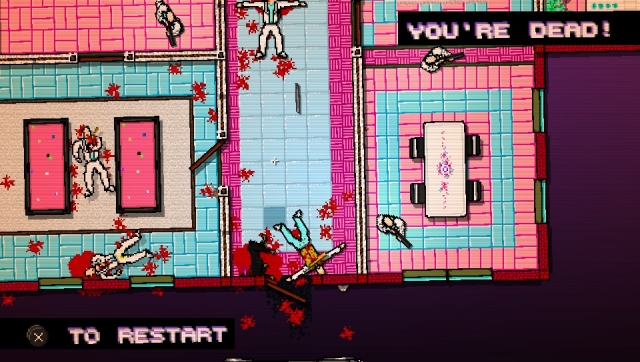 Every death is gruesome. The graphics are pixelated sprites, but if you use your imagination and pay close attention, you can see just how depraved the main character is. He slams people's heads into walls, stomps their brains out, shoots them, breaks their necks, and is just generally a cruel, heartless bastard. Almost every action is gloriously bloody, with splatters colouring floors and walls enough to make Dexter blush. There was a time when the retro look and feel would have been a bonus point in my eyes, but so many games are doing it now that it's just not so special anymore; it's just another way to do graphics. The soundtrack, meanwhile, is absolutely ear-scrapingly annoying, repetitive, and obnoxious soundtrack. Every track is reused multiple times, and every track is annoying. It made me glad my Vita had a volume button and that there's no voice acting, even though the sound effects are worth praising.

The endless wave of violence, death, and blood spatter could really have said something meaningful. It could have been a satire or a commentary on the modern state of games. A plot point involving hallucinations and questions of reality and fantasy made me eager for a third act reveal that could have been transcendent or plain out subversive by, for example, accusing the player of being a sociopath, but alas there was no great reveal to be had. At one point, the NPC's that had up to this point been helping me out and caring for me by giving me free pizza and movies start being replaced by others, their dead bodies laying there for all to see, but your character doesn't notice. You do, but he does not. There's no commentary, no real plot structure; you're just playing a psychopath who literally is unable to leave the room without killing everyone in it, innocent or not. I was really disappointed to be left asking questions I knew I'd never get the answers to. There was a part around the midway mark that had me clinging to my Vita, playing through dozens of annoying deaths just so I could see what was really going on, but even that subplot fizzles into nothingness. 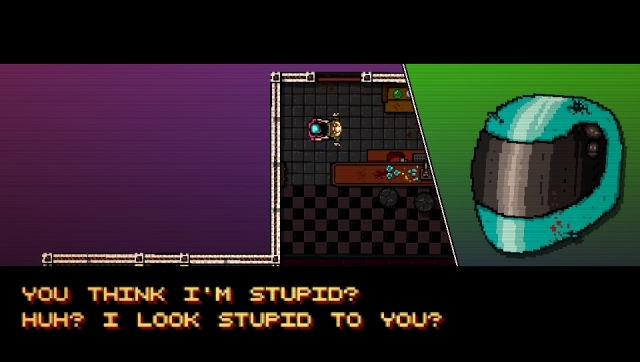 There are a total of 15 chapters in the main campaign, with an additional 4 bonus chapters adding some context to the main campaign. Each chapter has multiple stages, or floor layouts, that you have to dodge and shoot your way through. In theory, the entire game can be beaten in less than a half an hour, but that number is greatly inflated due to just how many times you are expected to die. This is not a game to play in long bursts, because frustration mounts with each death, and a player will get increasingly reckless as their body count gets over a dozen or more per stage, which only makes matters worse. This is an infuriating game. I know that's kind of the point, but I'm not seeing how it's fun.

To be fair, there's a decent amount of replay value to be found. There's a secret password that unlocks an alternate ending, dozens of masks to find, and the ever present goal to upgrade your top score for brutality, creativity, and speed. In theory, Hotline Miami could offer you dozens of hours of fun, but only if you like dying over and over and over again, and since that's what the game is in the first place, it gets old fast. There are a lot of things in this world that are fun for the right audience, and this is why I urge you not to focus on my score, but on what I have to say about the game's ethos. Some people use nipple clamps to add a little excitement, whereas I just find such things painful and unpleasant. To me, Hotline Miami is a set of too-tight nipple clamps; to you it may be nirvana, if you're into that kind of thing.

This review is based on a digital copy of Hotline Miami for PSVita.