Grand Theft Auto: The Trilogy – The Definitive Edition Out Now for Steam - News

Publisher Rockstar Games announced Grand Theft Auto: The Trilogy – The Definitive Edition is now available for PC via Steam. It was previously only avialable on the Rockstar Games Launcher on PC.

Grand Theft Auto: The Trilogy – The Definitive Edition is available for the PlayStation 5, Xbox Series X|S, Nintendo Switch, PlayStation 4, Xbox One, and PC. It is also in development for iOS and Android.

Calling them “high-resolution textures” seems funny given how fugly the games looked. These remasters were so half-baked.

Ugh. And each game is listed separately at standard price ($60 - although currently on sale). Also, there is no bundle to get a discount for all three. That’s just a bad look.
Note - My bad. This isn’t true. I was caught out by the cofusing way it was listed on the Steam store.

That's R* for you though, they made this move not out of charity, but likely because they thought the anger had subsided and that they needed more purchases from another pool, so now of all times do they choose Steam, and having just recently looked around, it seems they didn't actually change all that much for the trilogy since Oct 22 (meaning it still has bugs/glitches and less features).

For me they're not available separately at all. It's the bundle with all 3 or nothing.

Double-checked and you’re right. In the listing, it shows each separately for £55/$60 but if I click on one to buy it it shows the bundle. Bit confusing.

Have they taken down the original PC versions from Steam before bringing the Definitive edition?

pretty sure they have. Seems to be the new MO for remasters to weirdly take down originals, like SEGA recently did with Sonic 1-3 and CD when origins released (thank god I owned the originals on Steam before they took them down).

And yet it'll still require you to use the shitty R client to launch the game from Steam, to then launch from R, so nah, I ain't touching that.

I really wanted this one, but an important part of the experience for me are the radio channels. They kind of gutted that.

Are they still completely botched ports and worse than the original releases?

Played through Vice City on Playstation +, and it holds up pretty well. I didn't feel like finding every secret, but ran through all the main missions. 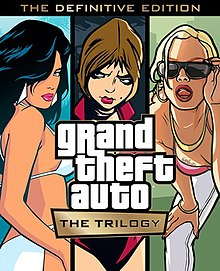