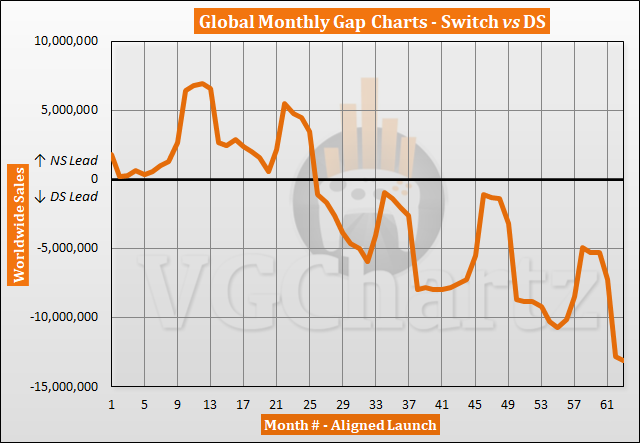 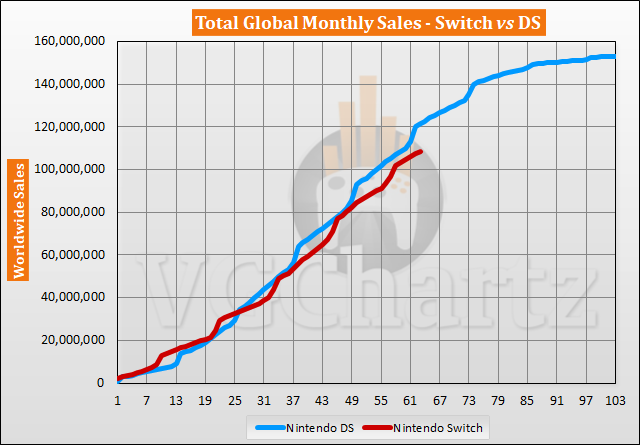 May 2022 is the 63rd month that the Nintendo Switch has been available for. During the latest month, the gap grew in favor of the DS by 320,856 units when compared to the Switch during the same timeframe.

This is gonna be a fight

Switch will probably finish in the 18-20M range this year, and around 15M if not less next year (really depends if successor is announced by then), and sales will begin dropping soon however it depends also when exactly they will announce and release the successor if it is sooner it won't pass DS. If it is something like 2025 then I can see it a possibility but I doubt Nintendo will wait till 2025 to release the successor. My bet is it will finish at around 140M or few millions above.

If you are anticipating 18-20M this year then switch will end around 122M. 15M more units would make 137M. Only 3-6M more units from there is a bit too low. Unless you expect it to have that extremely harsh drop like the DS had.

The drop will probably be as harsh as PS4 if Switch 2 is backwards compatible.

yes, I expect that. As the times move on, every following console get's worse and worse legs after their successor is announced/launched. Also if it's successor is launched or even only announced next year Switch isn't doing 15M but far less. Also don't take the highest numbers. If switch do 18M this year it will finish 120M. If successor is even only announced (not launched) by next year Switch is doing no more than 12M. (If it launched by the year's end then maybe even below 10M) So 132M to this point. After this the successor launched and switch is dead. Maybe barely reaching 140s.

The Switch could easily overtake the DS in the future despite this deficit. While the deficit is around 13 Million rn it's more accurate to say the deficit is closer to 8M if the DS & Switch were to have the exact same # of holiday seasons, rn the DS has a 1 Holiday season advantage.

But more importantly we have to keep in mind that by the 5.5 Year of the DS's lifecycle the 3DS was already unveiled and DS sales sharply dropped after the announcement. There's no signs at this point that a switch successor is coming anytime soon so sales momentum after the 5.5 Year will be very much in the Switch's favor to be able to overcome the 8 Million deficit right now.

I personally believe the Switch will beat the DS cause if this.

the deficit is exactly 13M, not 8M. Holiday more or not the deficit is 13M.
And it will become bigger till the end of this year because Switch will probably sell less than 2010's DS - 20.3M. After this Switch will start to close the gap by a little but not enough to close around 15M (by then) by end of it's lifecycle. Switch will come short of the DS by at least 10M if not more.

The Switch is forecasted to ship 21M til the end of March 2023, more likely the Switch will hover around 20M so the DS won't really gain much of any notable lead for the next year.

But let's say the Switch sells 20M til the end of March 2023 which is slightly lower than Nintendo's forecast, the Switch would be around 128M by March 2023. A drop off of to 15M the next fical year ending March 2024 seems the most likely putting the Switch at 143M by March 2024.

It seems like you're expecting a drop off thats far too significant, by the sounds of it you're expecting the Switch to drop off from 20M this year to 10M which is unrealistic unless Nintendo announces a Switch successor next year which doesn't seem likely since we've heard no major rumors to point towards it or any signs
from Nintendo.
A more realistic scenario is:
March 2023: 128M
March 2024: 143M
March 2025:151M
Total~155M

DS still winning ground in this comparison makes me doubtful Switch can overtake it. As Switch probably will overtake PS4 this year, there is a nice and comfy 30M gap until DS, which Switch very likely will fill up.

Even with a successor launching, they can reduce the price and keep selling it forever like the PS2.